Lapeyre Leads the Business Council to Increase its Influence 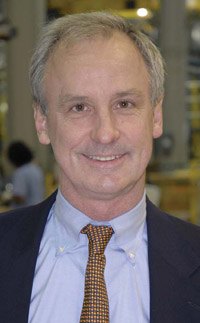 While all citizens’ voices in a democracy should ideally count the same, in actuality some voices echo more loudly than others in the halls of government. Business leaders, for one, tend to have outsized influence in public affairs because of how their decisions effect the economy and employment figures. Luckily for New Orleans, leaders like Jay Lapeyre are energized and fighting for the city’s turnaround. Lapeyre and his colleagues in the business world are consolidating their efforts to improve the Big Easy through the Business Council of New Orleans and the River Region.

“Businesses are often thought of having different interests than the community at large, but really our interests are aligned. The Business Council wants to create a city that’s a good place to attract employees and get them to stay,” says Lapeyre, who is chairman of the organization. In addition, he is president of Laitram, LLC, a manufacturing firm based in Harahan with 1,100 local workers and 300 more throughout international sites.

One issue important to the Business Council is to avoid a repeat of the catastrophic flooding that occurred after Hurricane Katrina’s landfall. Individually and through partnerships with groups like the Flood Protection Alliance, it has worked on important issues with the Army Corps of Engineers, levee boards, and sewerage and water boards. The council also supported the creation of New Orleans’ inspector general position, which is expected to cut down on government corruption. It has aligned itself with the New Orleans Crime Coalition to work to make the city safer. Improving education, establishing fair property assessments, and finding solutions for the insurance crisis are also goals of the Business Council.

While these diverse issues may seem wide ranging, they are united by a common thread. “We want to create a place where people feel their lives and property are protected,” Lapeyre says. Lapeyre accepts that bureaucratic bottlenecks are pretty much inevitable in government, but the council believes its efforts can help minimize breakdowns and can push action through sluggish governmental channels.

The Business Council of New Orleans and the River Region has been around for over 20 years, starting in the mid ’80s, but it rallied and stepped up its efforts in the days following August 29, 2005. Just after Katrina, the group started coordinating initiatives through weekly phone calls and frequent meetings.

More recently, it created the new, full-time position of managing director to coordinate key priorities and organize task forces. The position was filled last October by Bob Brown, who had been a vice chancellor at the University of New Orleans.

“We need to take advantage of this window in time,” comments Lapeyre. “If we don’t solve these problems now, it’s never going to happen. It’s just not realistic.”

“Prior to Katrina, there was an acceptance, even fatalism, that things were in decline,” he continues. “People just had a vague hope that things would get better for New Orleans. It’s true for all of Louisiana as well. The South has enjoyed tremendous prosperity, but we’ve just been bystanders. We’ve been chasing talent away. Now is finally a chance to change things. People are aware that the price of apathy and incompetence is just too big.”

Lapeyre admits his devotion to the Business Council and its agenda stems from self-interest. He makes no mention of the food, music, history, architecture, or any of the other cultural enchantments of New Orleans that people frequently cite when talking about saving the city. To Lapeyre, the fact that his family, friends, and business are here is enough. “The idea that we would abandon New Orleans, it would come at extreme personal cost,” he says. “This is where my roots and life are.”

Although his firm is in Jefferson Parish, Lapeyre grew up in Orleans and currently lives uptown in the university area. He earned his undergraduate degree from the University of Texas in Austin, but his law and business degrees are from Tulane.

Lapeyre’s father, J. M. Lapeyre, started his company. The elder Lapeyre was an inventor by nature, having invented a shrimp peeling machine while still in his teens. (Eventually, he would claim 180 patents to his name.) This machine, which J. M. Lapeyre refined with his uncle, became the basis of Laitram which was originally located on S. Peters St. downtown. The company operated for a long time as a successful but niche business. A problem with rusting, corroding conveyor belts drove J. M. Lapeyre to invent a plastic version. This “modular plastic conveyor belting” first was greeted with suspicion in the industry, which believed that anything made of plastic must be junk. Eventually, plastic conveyor belting made inroads, and now this conveyor belt division far outstrips Laitram’s original shrimp-peeling-machine business. Currently, Laitram features five separate divisions and has satellite offices in the U.K., the Netherlands, Brazil, China, Japan, and Australia.

Jay Lapeyre does not profess to having his father’s talent for invention. “I’m a plagiarist,” he jokes. He notes, however, that Laitram has changed in recent years by growing in managerial confidence. All of his father’s patents have expired, so the company now has competition. Still, Laitram is the worldwide leader in all its endeavors. The company’s focus now is on attracting top people, cultivating an atmosphere for success, and creating a “culture of continuous improvement,” a phrase that appears on the company’s materials.

New Orleans itself could benefit from adopting a culture of continuous improvement. Lapeyre and the Business Council hope to show the city how it can be done.

605
previous The Whole Package
next A Picture of Cajun Country