A touching memoir about young love with the King 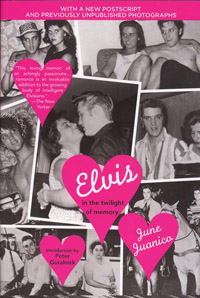 It’s also been said that you don’t choose who you fall in love with.

Love often comes unexpectedly and impossibly. What is it about another person that causes a flutter in your breast, enough so that your world turns upside down?

Last week I had the pleasure of reading a tender and tragic memoir of young love. The book came my way as a gift, not to me, but to my publisher, Maria Muro. But at first glance, I knew I had to read it. The story is by and about June Juanico. I was utterly drawn in by her intimate portrait of romance in a world long past, and of her lover, whom I too adored.

One dusky evening in the summer of 1955, June Juanico reluctantly accompanied her best friend to a music club to see a performer she had never heard of. It was then, at the age of 17, when first she met the love of her life. Their eyes met across the small crowded room, he reached out, touched her arm, and nothing would ever be the same.

He was tall and lean, with piercing blue eyes. Charismatic and gloriously handsome, his presence dominated the entire room. June was inescapably drawn to him and would soon learn that she wasn’t the only one who loved him. For he was Elvis Presley.

But what separated June Juanico from all the others who lost their hearts to Elvis Presley— including me—was that he would fall head over heels in love with her, too.

Elvis and June’s romance took root on a moonlit beach in Biloxi, Mississippi, and blossomed in the local diner over tall Coca-Colas, the jukebox crooning “That’s All Right” in the background. His career was fast-growing, and she was at his side, supporting his meteoric rise. They were passionate for each other, finding it impossible to be apart. Elvis loved June’s quirky sense of humor and easy confidence, telling her often that she was unlike anyone he’d ever known. June melted in his embrace.

June traveled on tour with Elvis and his band, soothing him after every energetic show. She knew the importance of allowing him space to connect with his fans, even though it was she that he wanted at his side. He showed her off, riding around town in a pink Cadillac or a white convertible Eldorado; she snuggled close to him in the long front seat. He whispered sweet nothings in the hollow of her neck and tenderly kissed her face. They did all the fun and exotic things that dominated life in the ’50s—motorcycle riding, going to the movies to see James Dean or Brando on the big screen, horseback riding, fishing and water-skiing. They were happy and carefree, and on top of the world. They professed undying love to each other and fantasized about the life they’d create together. He took her home to Memphis to meet his parents, vowing to someday make her his bride. There was little doubt in Mrs. Presley’s mind that young June would take good care of her only son.

But love is often unbridled and uncontainable. Just as love moves in and bestows its crown upon an unsuspecting head, it can just as quickly take it away. The one constant is that things change, love morphs, lives take separate paths. Elvis’ career continued to explode, and he found himself in the whirlwind of Hollywood with all the distractions the city of fantasy offered. His career was unsustainable within the confines of their southern romance. As he was pulled away from her, their time together increasingly infrequent, June resigned to protect her breaking heart the only way she knew how. The next time her love came to call, in March 1957, with exciting news he assured her, she met him at Union Station in downtown New Orleans and ended their long-distance affair. It was so very difficult to push his arms from around her, but deep in her gut she knew that by breaking his heart, she just might save her own.

Read more about Elvis and June in June Juanico’s memoir, Elvis: In the Twilight of Memory (Arcade Publishing, 1998).