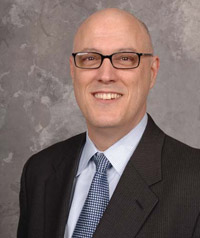 Ski Austin, executive vice president of events and attractions for the National Basketball Association, joined the league in 1989, possessing a bachelor’s of fine arts in directing and theatrical design. While an unlikely background, it must have been useful, as he went on to help the NBA break onto the global scene with the Dream Team at the Barcelona Olympics in 1992. On February 17, he will bring what is now a cast of hundreds to the surging city of New Orleans to produce one of major league sports’ biggest spectacles, the 2008 NBA All-Star Game and a weekend full of events the public should love. Once again, hot on the heels of three bowl games, the BCS Championship and Mardi Gras, New Orleans finds itself on the nation’s biggest stage, thanks in part to the NBA’s strong presence.

Hi, Ski! How useful has your BFA in directing and theatrical design been in your career at the NBA?

The spontaneity of it is the best preparation. Producing NBA events is very similar to the theatrical world in that everything happens in live time and that to me has been the most valuable aspect, to know that at a certain time, whenever it may be, the ball goes up in the air, the event starts, the curtain goes up and every time it happens you have a chance to do it, do it in real time, and do it right.

We will be in New Orleans for as many as 12 days before and after; it’s pretty much around the clock. The All-Star Game has grown from a three-day event to a week of activity. Once we hit the ground, we start executing game plans for day-by-day scenarios. I like to think we are an hour ahead of the event all the way around, and I’m just going place to place, troubleshooting when issues start popping up; and, if we have done our job well, we will be prepared to react to whatever kinds of problems or changes, no matter what the plans were, whether that may be weather or traffic conditions or anything unforeseen. I have a very good group of 60 people in the department who are the best at what they do and are committed to creating a great experience.

How big of a team do you bring in?

At the peak time, we will likely have as many as 700 employees from the NBA offices in various capacities in New Orleans; they may be entertaining marketing partners, holding the cameras or microphones, doing the production, or they may be part of my staff, but it’s a big move-out for a large number of people.

Besides the All-Star Game itself, can you tell us a bit about the other events that will take place leading up to the game?

There are a few categories. There are the arena events which feature the 3- point contest, the slam dunk contest, the skills contest and the shooting stars, all leading to the All-Star Game on Sunday. And then there are a slate of events that are accessible to, and geared to, the public, including the Jam Session at the Convention Center, the Rookie Challenge at the Arena on Friday night, when the rookies and the sophomores will play each other, and the Celebrity Game and the All-Star Practice—both of which are separate tickets and which sold out quickly when they went on sale. A third category, which is something of a new event for us this year, is that we are inviting all of our guests to come out a day earlier for a schedule of 10 to 12 projects for volunteer service and we’re calling it the NBA Cares Day of Service, and it will be taking place on Friday the 15th, all day throughout various areas of New Orleans and outlying areas, whether it be school refurbishment, park cleanup, home rebuilding or playground refurbishment, and we expect to have around 3,000 volunteers working on that throughout the day.

Tell us about the role of NBA Cares in New Orleans and its revitalization goals. Obviously the NBA is very committed to helping New Orleans get back on its feet.

Yes. We have gotten a great response from people and they want to know what else they can do, how early they can come and what they can do to help, because for a number of our guests this may be their first post-storm visit to the city, and we are very committed to the social responsibility of our organization and a lot of our guests extend that commitment when they are invited to these types of events. The Players Association, the NBA Wives, and the Retired Players Association are involved, so every extension of the NBA family has a role in this. Along with our players and coaches, it’s a very top-of-the-line subject for everyone, and many players are active on their own, so this is an effort to aggregate those resources and spend a day making a difference in the rebuilding.

What can fans expect to see at the Jam Session?

It’s great. We’re generally in the 100,000-attendance range, and we have a program working with some of the schools to provide transportation from some of the outlying areas to ensure people can get to it. We’ll be open for four days, Thursday through Sunday. It’s a huge basketball theme park, with half a million square feet of space where any skill level, age or gender can certainly find something to do and have a good time. There is a regulation, full-sized court, where there will be the All- Star practice starting Saturday and that’s where the Celebrity Game is on Friday, and it has full audio-visual blowout, like a miniarena in itself.

Does the NBA view New Orleans as a continuing viable major league city? It seems that we have seen a commitment there.

Our team is back there, and we would like to see them be successful. They’re having success on the court, winning two out of every three games they play there, so I think every day the situation looks better. Mainly it’s a question of educating the rest of the country that the city is not under water, it’s open for business and there’s a lot going on.

New Orleans has a long history of hosting major sports events, including most recently the BCS Championship. Do you see New Orleans as having certain advantages over other cities for hosting these kinds of major events?

Yes, it’s a major plus. An important thing about large events is that they always look for something unique about a possible destination and that’s not particularly hard to find in New Orleans, especially with the cuisine, entertainment, music, history and colors; it’s a great place to start as a baseline to produce a large event. It has the reputation of being one of the top convention towns in the U.S. One of the things that worked so well for us is that it has the large hotels, the great local stops for cuisine, and the music and entertainment, and it’s all geographically in a very small proximity, so it creates a great community, what we call “the community of All-Star,” where everybody can walk around and see each other and enjoy one large social event just by being here.

What are your impressions of New Orleans Arena as a host venue?

It’s great! It’s state of the art and that’s very helpful for us, from a behind-thescenes technology standpoint but also because it offers different places to do more of the recent things we’ve added over the years, like the smaller targeted hospitality opportunities. Just having a newer building is always an advantage for us along the lines of things the fans don’t see, things that go on behind the house. It’s a really nice building.

When the notion of bringing the All-Star Game here first arose, were there any perceived obstacles to bringing the game to New Orleans?

We had conversations pre-storm, but when we first started discussions post-storm they became pointed toward whether we could really make this work, and the key issue at that time was to know whether there was a comfort level within the Convention and Visitors Bureau and the Sports Foundation, that there would be an infrastructure back in place in terms of the hospitality community, and that hotels would be back up and running. And with some great help from the Convention and Visitors Bureau we secured the hotel room package that we needed and moved forward from there.

What will be the estimated economic impact of the All-Star Game for New Orleans?

We leave that to the city; we provide the numbers of people we bring in and what we do locally in terms of our spending and restaurant and hotels rooms and things of that nature, and every city has its own formula for what that translates to, based on their experience of having different conventions and groups in. I can tell you from past years it has ranged from $50 million to, in Las Vegas last year, $90 million, without gambling revenue.

How important is the corporate presence and involvement for the All-Star game to take place?

Our partners are important to us, the people who work annually with the NBA, in that they’re helping on the 15th with the Day of Service. Each of our partners is taking a role in helping to fund everything that’s necessary to put those projects together to help cover the additional cost involved. There’s a huge interest not just from the basketball community but also from the corporate community to come out here and be a part of the rebuilding effort. We have been very happy with the corporate response. There are a number of corporations that have provided different contributions or the underwriting of activities, but some of the sponsors that are participating directly in events for All-Star Weekend, in that their names are being used in conjunction with event names (for example, the NBA All-Star Jam Session presented by Adidas) include Adidas, McDonald’s, Southwest, EA Sports, Sprite, Haier and PlayStation.

What do you want to accomplish or produce one day that you have not yet had a chance to?

We extend ourselves annually to do more and more. We produced games, literally, around the world last year in China, Italy, the UK and Turkey. Over the years we have produced games in 15 countries, and non-game activities in another 15 countries beyond those. I enjoy the annual challenge of keeping the calendar going, keeping it growing and keeping it fresh.

What is the most satisfying thing about your job?

The best part is the adrenaline rush when the event is actually here, and being in the midst of that 10-day period that escalates daily into the culmination of the best basketball players on the planet on Sunday evening playing that game, and that’s the highlight, the one event that every member of my department works on, and for all of us that is our annual adrenaline rush, so that’s one thing I look forward to every year. It’s great, there’s nothing like it.