A Picture of Cajun Country

In the heartwarming film ‘Little Chenier,’ actor Johnathon Schaech gets it right 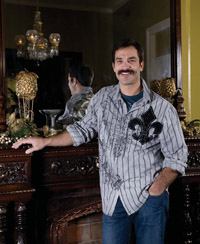 As an accomplished actor, writer, director and producer, Johnathon Schaech has forged a most impressive résumé in Hollywood. He’s landed plum gigs in film and television, and his most recent acting role finds him in New Orleans’ own backyard: the Lake Charles area. The feature film Little Chenier: A Cajun Story is a heartwarming and expertly woven tale that paints a picture of simple Cajun life—until that life becomes complicated. Schaech brings emotional depth to his character Beaux Dupuis, who struggles to make ends meet at the bait shop he runs with his mentally handicapped brother. Audience members will be kept on their toes as they wait for the truth to unfold, and Schaech’s hope is that this special film will help someone with his own life, just like it helped him.

Little Chenier, which opened January 18, had a red-carpet premiere in December at Prytania Theatre, with an after-party at Grand Isle that benefited the survivors of Hurricanes Rita and Katrina. During his recent trip to New Orleans for the screening, Schaech dined with his parents on boiled crawfish at Acme Oyster House, kept a watchful eye out for Vampire Lestat, and squeezed in some quality time for New Orleans Living Magazine!

Hey, Johnathon! I understand that Little Chenier has garnered all kinds of accolades and praise from the film community, like at the Park City Film and Music Festival, the Ace Film Fest, and others. That must make you feel great!

Yes, Christine, I haven’t been able to travel much to promote the film, but I got to go to the Phoenix Film Festival to promote another movie I did, and everyone kept coming up to me there saying that Little Chenier was the best picture of the year!

That’s remarkable! This movie tells a really endearing story. What attracted you to the script?

I read the script and thought it was a beautiful story. The way it was phonetically written was different than anything I’d ever read. And when it was actually being made, it hit all the heartstrings in my own personal life, because I had recently lost the person that I loved very much in a hard breakup, and my character, Beaux, was going through a similar situation. I was able to use my life in my work, and that’s what I have always been trained to do.

How was working with the director, Bethany Ashton and your cast mates?

Every single person was so committed to the project. We endured lots of weathers and hard locations; it was difficult to shoot, and I lived in mosquito repellent! It was a wonderful group of people, and we just kind of bonded. It’s a pleasure doing a film when everyone is determined to telling the story as best they can.

What did you think of the finished product of Little Chenier?

I loved it! When you watch the movie, you see my character, Beaux, taking care of his handicapped younger brother, Pemon. But when you really watch it, you start to see that Beaux’s handicapped brother really kind of takes care of him.

What did you come to know about Cajun people and their culture during filming?

Everyone’s always told me my entire life that I look Cajun! [Laughs] I found the people to be quite unique, and there is much diversity within such a small group. And I learned about Cajun accents. You watch film and hear people doing the Cajun accent, and they’re almost doing a caricature of a Cajun accent. I met Cajuns and everyone has a very diverse accent among such a small group of individuals.

I tell you Johnathon, we New Orleanians listen closely to see if actors get the New Orleans and Louisiana dialects correct. And if they don’t, honey, we rip ’em a new one! I think you did a great job with the accent!

[Laughs] Oh, thank you! I’ve had two major compliments. One is when I played Harry Houdini. I came out of a screening in Las Vegas and an old friend of Harry Houdini’s, who must’ve been about 90 years old, walked over to me, looked at me and said, “There were moments when I heard Harry’s voice come right through the screen. You did a great job with his voice,” and he had tears in his eyes. Then for Little Chenier, at the Austin Film Festival as I came out of the screening, there was a whole tribe of Cajuns that came from the Lake Charles area to come see the movie. A guy wearing a camouflage baseball cap came over to me and started talking; first I didn’t understand what he was saying because of that Cajun accent, and he looked at me and says, “Hey, you’re just as good as any of those Hollywood actors!” [Laughs]

That’s as sincere a compliment as you can get! So give us some behind-thescenes scoop about what went on while you were filming.

Okay, we had to talk down Clifton Collins, who played T-Boy in the piece, from actually trying to wrestle the gator in the scene! [Laughs] He was getting in there no matter what to wrestle that gator! For two weeks, everyone was telling him it wouldn’t be safe, there’s nothing they could do to help him. So they bring out this big ol’ gator, my God he was HUGE! A stunt guy wound up getting in the water, but Clifton did have to jump in the water with the gator, which was chained up. But the gator went underneath the water when he did! [Laughs] He didn’t know where the gator was, and damn it, if that gator didn’t come up with his eyes looking straight into Clifton’s eyes, and I swear he must have walked six feet over water after that! [Laughs]

What interesting foods did you try while filming in Louisiana?

Oh, I ate gator every day, and they took such good care of us. They had the greatest jerky, and what I loved the most was the boiled crawfish! I’m from Maryland and we have similar fresh seafood there. I really felt at home. I remember when we had trouble getting crabs in the Chesapeake, we would get them from Louisiana! I love that!

How did Hurricanes Katrina and Rita affect you, knowing the area you filmed at doesn’t exist anymore thanks to the storms?

God, you didn’t expect Katrina to nail New Orleans so hard! And seeing Sean Penn and guys running down to help out, it was just madness! It’s like, what’s going on? Our government once again isn’t taking care of the poor folks in this country. I was so angry! When Rita was starting to mount, I remember watching the waters washing up at the casino I stayed at in Lake Charles on CNN! I called people down there, such as Lieutenant Ron Johnson, who became a good friend of ours and took good care of us, and I remember he was in a bunker! And so many people I met down there lost their homes. Everything everyone owned was just wiped off the map. People just don’t realize what that hurricane did! It was so sad.

New Orleans is trying hard to come back. Had you visited New Orleans before your most recent trip?

Yes. I started a brawl down on Bourbon Street once! [Laughs] I was there with this model and boys touched her in the wrong places on the dance floor. Next thing you know, punches were being thrown. I swear, it became one of those barroom brawls! People were hitting each other and didn’t even know why! I literally crawled outside with this girl and all the chaos continued inside. It was unbelievable! It was crazy, but we had a lot of fun. I love the food, of course. I was big into Anne Rice the first time I was down there, so I was looking for Vampire Lestat everywhere. But sometimes he resides in me! [Laughs]

You seem to gravitate toward interesting roles versus the mega- Hollywood type of roles.

I’ve made some choices that have led me to be able to grow. But I definitely think the roles have chosen me. Even with Little Chenier, in some way it chose me. I didn’t audition for Bethany; it just came around. There’s an acting God, and he said, “You know, Johnathon Schaech should really play this role!” [Laughs] Next thing you know, I’m getting to help tell that story. I’ve never had the big blockbuster, but this year I have two big films coming out: One’s called Prom Night with Brittany Snow, and I’m filming Quarantined right now, and they’ll both be big releases in April and October.

You’ve had incredible opportunities to work with some industry heavy hitters like Tom Hanks, Tom Fontana …

I’ve worked with so many great people—Kenneth Branagh, Robin Wright Penn, Sean Penn—but this group in Little Chenier is just is good as any, and many from this group of actors will be winning awards.

What is the most popular role you’ve done?

Jimmy Mattingly in That Thing You Do! It wasn’t a blockbuster film, but it’s a film that has received more playing time than anything I’ve ever been a part of. It’s been on VH1 nonstop for years!

Your production company, Chesapeake Films, has adapted some Stephen King works. Are you a horror buff?

Yes, that’s one genre that I have an interest in. My partner Richard Chizmar is a leading independent publisher of horror in the country, and we write for Showtime’s Masters of Horror, which now will be Fear Itself on NBC. And we’ve worked with Stephen King; we’re making From a Buick 8, but the writer’s strike is complicating things now. And we adapted Black House, the sequel to the The Talisman, for King, and we’ve adapted for Akiva Goldsman. So we’ve got some good stuff, man.

What role do you want to play one day?

I’d love to be in front of the camera with Sean Penn and to work with Tom Hanks again. And then there’s Denzel Washington, Forest Whitaker and Brad Pitt that I’d love to work with.

Will we ever see you working on a film project in Louisiana again one day?

Oh man, I’m dying to get down there again! My business partner and I got to rewrite Road House 2: Last Call for Sony. I got to star in it, and it was shot in Shreveport. I tell you, the people down there are just wonderful. I absolutely loved it! I’ll be back!

Johnathon, you are fulfilling your dreams, aren’t you?

Yeah, you’ve got to dream big, and you’ve got to execute. You are playing the lottery with your dreams. This field is so competitive; you have to work hard at your craft. I’m just constantly trying to grow. My head is always yearning to make my existence have meaning, and you learn along the way that the things that don’t kill you will make you stronger.

323
previous The Biz Factor
next Shell and High Water