More than a restaurant, Upperline is an institution and so is JoAnn Clevenger, the woman who runs it 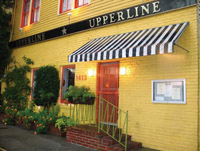 Many cities are simply a name on a map, but New Orleans is a state of mind, an amalgam of people celebrating life in an inviting, culturally diverse, warm and spiritual place. The legendary owner and general manager of Upperline, JoAnn Clevenger, understands that better than most.

This month, the exquisite and innovative gem of a restaurant celebrates its 25th birthday, and Clevenger, the consummately charming hostess with the mostest, reflects on the fond journey that Upperline has taken her on. While this Uptown institution continues to garner accolades for its sublime food and wine, it’s Clevenger’s expertise at crafting an otherworldly, blissful experience that will continue to keep diners enchanted.

Hi, JoAnn! It’s so exciting that Upperline is celebrating its 25th birthday this month!

Oh, it is! I want to pay tribute to those that made this possible, all the chefs, employees and people that contributed. Many guests were here from the beginning. When I look at the whole thing, it’s difficult for me to wrap my brain around it. We’ve served over half a million people, and I’ve probably spoken to 90 percent of them! [Laughs] The mixture of people at Upperline reminds me of why we love New Orleans and its great variety of people. You play a role in others’ lives you’re not usually conscious of. That’s exciting!

You are often referred to as a New Orleans legend. How does that suit you?

It’s completely unreal! New Orleans has been very good to me. I moved here from central Louisiana when I was 17, and everything I’ve experienced in life was possible because of New Orleans. To become part of that is like a tapestry, where it doesn’t all really blend together, but it makes a complete picture for me, and often I’m one of the little dots on it!

Upperline has never been just a place to eat. There’s something spiritual lurking within the walls, something that casts spells on your diners!

Oh, I like that, Christine! When people go to a good restaurant, they’re not going because they’re hungry for food; it’s because they want to feel good, connect and break bread with strangers and friends. When a couple celebrates their 50th wedding anniversary in the dining room, it makes me almost cry. That setting that Upperline is—one that makes people feel good about celebrating life—is contagious!

I love lingering over your art collection at Upperline and the fresh flowers. Its atmosphere and ambience segues to that spiritual side of New Orleans, and it’s obvious Upperline gets it!

That’s a nice way of saying it! It’s really a good feeling to share with others. The restaurant satisfies a lot of my passions, such as art, food and flowers. Somehow all together it nourishes our brains and our bodies. And the amazing encounters we have, aren’t they wonderful!

Indeed, the connections we make here are strange and lovely, for sure!

I couldn’t say it better! They are strange and lovely and they’re every day in New Orleans! At Upperline, it’s like inviting people into my home. It’s rewarding in an emotional and a “purpose in life” kind of way. It’s a business, but I couldn’t do it for 25 years if it was just a business. The staff has made this possible; everyone works together as a perfect ensemble. You can’t put food on a beautiful plate unless someone washes the plate.

Having such dedicated employees must be as much of a compliment as the praise Upperline receives from The Wine Spectator, USA Today, The New York Times and others.

It makes me feel good that they want to be a part of this. I feel extraordinarily lucky, especially since Katrina. We opened six weeks after Katrina; we had two waiters, a bus person and chef Ken Smith. The neighbors had no groceries, churches or gas stations, and we had only four main courses on the menu. I think it gave people that feeling of hope that we can regain what we lost. People were hugging and crying, and I think of all I’ve ever done, reopening was the most emotionally important thing for people. One longtime guest said, “JoAnn, this must’ve been like London during the Blitz, where the tiniest bit of civility brings hope.” That gives me goose bumps!

What dish at Upperline really makes you smile?

The fried green tomatoes and shrimp remoulade dish has emotional resonance, because it—but certainly not its components—was invented here at Upperline. I heard a movie was being made about fried green tomatoes, and I thought, Oh my gosh! We must have fried green tomatoes on the menu! I didn’t want it to just be a clone of the past. The staff and I brainstormed, and one morning, I woke up thinking, “Put shrimp remoulade on top of fried green tomatoes!” It was an instant hit back in
1992. No one copied it until 1995; I walked into Uglesich’s, and Mr. Anthony calls out to me across the dining room: “JoAnn! I copied your green tomatoes, come try mine!” I told him, “Well, I hope you named them for me!” He didn’t, but when they wrote their cookbook, he gave me credit! That dish is all over the country, and that’s exciting to create a dish that’s become part of the genre.

JoAnn, many people will thank you for 25 years of memories.

Memories are what make a restaurant. People feel good interacting with loved ones, and they carry those memories with them. Even if they forget the name of the restaurant, they remember the warm, good feelings they had with their families and friends. I think New Orleans restaurants do that for people, from the neighborhood po-boy places to the elegant, golden palaces of our city. Those wonderful experiences in restaurants add to our well-being.

95
previous Get Toasty!
next When It Rains It Pours