Paintings symbolize a rebirth of the old New Orleans

The vibrant and multi-cultural dexterity of New Orleans is often reflected in the artwork of its local artists and Terrance Osborne is no exception. His colorful and vivid paintings display the spirit of New Orleans.

Osborne painted the 2007 and 2010 Congo Square Jazz Fest Posters that portrayed Phillip Frazier and Lionel Batiste, respectively. They quickly became best sellers among poster connoisseurs nationwide and may have influenced his selection by the Jazz and Heritage Festival and Foundation to produce his first poster for their festival this year. His design depicts Troy Andrews (Trombone Shorty) blasting music from the front porch of a shotgun shack. The porch lights bathe Andrews in a glow that covers the flowing houses in the background while simultaneously lighting up the sky. The poster speaks with a sense of renewal to both the festival and the city itself. “The whole time I was painting this piece, I felt like that the city is slowly coming back and this poster signifies that. Whatever we lost, it seems to be showing its face again,” said Osborne.

Many of Osborne’s paintings in the aftermath of Hurricane Katrina were tongue-in-cheek portrayals of houses and iconic city landmarks that were absurdly stacked on top of each other or morphed into something else entirely. Other Katrina-inspired works of Osborne’s reflect both a sense of tragic loss and rebirth for New Orleans.

“Katrina gave me more to paint about. The first piece I did after Katrina was when we were living in Georgia and I couldn’t paint a house without water underneath it. It seemed like every piece I painted I had to paint water in it for a long time but slowly I got away from that,” Osborne said. “Some of the work that I salvaged from my house had water lines on them from the flooding. The yards in those paintings and the waterlines left on the paintings were at the same level. I just painted water over the grass in those landscapes and left the water line on the back. That was the kind of work that every artist was doing here—Katrina-related work almost by force.” 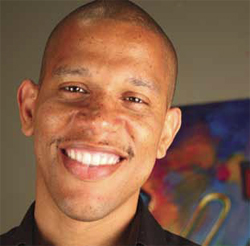 Osborne’s paintings constantly exemplify the optimism and resilience of a city still recovering from disaster. “The city was almost like your favorite broken coffee mug. You put it back together with some glue and you have it, but it’s not the same. So, now it feels like we just got a new mug. It’s not the same as the last one, but it’s new and it’s a fresh start,” Osborne said.

Inspired by his mother, Osborne began exploring his artistic talents at an early age. A graduate of Xavier University in 2000, Osborne became a full-time teacher but after Hurricane Katrina, Osborne and his family fled to Georgia for a short time. Before Osborne had the chance to seek out a new teaching position, his artwork garnered him multiple commissions and he’s been working as an artist ever since.

Osborne started painting on wooden boards giving his art a unique quality, which is also appropriate for his theme of traditional New Orleans architecture and style. “I started working on wood mainly because it was cheaper for a college student to paint on that than on canvas,” said Osborne.

Like many artists, Osborne’s work has evolved over the years into a more settled and consistent theme. “I did more figurative work when I first started painting. I’ve become a little more certain about what I’m doing, which might come with age too. I’m more confident in what I’m painting now, much more than when I first began.”

Many of Osborne’s pieces in recent years have incorporated a 3-D component. “I started playing around with different elements of my paintings and eventually began cutting out pieces of the board and making them 3-D to give it a pop,” said Osborne. “I want my work to stand out when you walk into the room; I don’t want you to pass it up. It’s also just much more fun and a nice mixture between sculpture and painting.”

Osborne’s work has resonated with many people because of its bright colors and iconic New Orleans components and, like the city itself, Osborne’s paintings are diverse and rejuvenating. Undoubtedly his work will continue to inspire local residents and solidify itself as a new edifice of the old New Orleans.

2.76K
previous Spring Arts in the City
next Dawn DeDeaux