Studio 3 helps to carry on the fantasy of Carnival 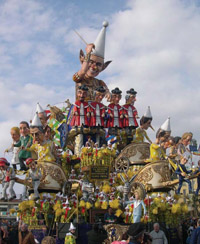 Virtually everyone in New Orleans has heard of Blaine Kern, the biggest name in Mardi Gras float design. Not as many are aware of Studio 3, though it has a regular presence during the carnival season as well. “We’re a niche company, and we don’t do one specific parade,” explains Jonathan Bertuccelli, whose father, Raul, founded the business. “We do pieces of parades, and we sell or rent our pieces to the people who build the parades. We’re like Switzerland here in New Orleans, in a sense. We’re neutral. We get along with everybody who builds the parades. We compete against our clients sometimes, but we also work with them and rent them props.”

The Bertuccellis have practiced their craft in New Orleans since moving here in 1977, but the family has been in the business for generations—starting out in Viareggio, the town on the Italian Riviera where Raul was born. “My great uncle was a wooden boat builder, and there was a lot of craft involved in that,” Jonathan says. “My grandfather was a little bit of a jack-of-all-trades—including boat building, but many other things as well. There’s a huge carnival there, [with] amazing carnival floats. They’re up to 50 feet tall by 50 feet wide, and they carry around 150 people. The craft that my grandfather developed in Italy was used to build these floats.”

Over the years, the Bertuccellis have developed their reputation and their business. In the early 1980s, the business got a big push when Raul used sponsorship money to run a Christmas parade through the French Quarter. “That got our foot in the door and gave us enough money to take off as a small company,” Jonathan says. “Through that, several other things came in.” Today, Jonathan runs the business; Raul, who just turned 80, is semiretired. In addition to its work in New Orleans, Studio 3 regularly builds floats for Houston’s annual Thanksgiving Day parade, and it has worked on a number of Disney and Universal Studios events. Studio 3 has also built props and staging for Super Bowl pregame and half-time shows, sets for television and film studios, and statues for casinos throughout the country. Outside the United States, Studio 3 has worked in places as diverse as South Korea, Antigua and Italy. “We’ve been a little bit everywhere and we’ve done a lot of different things, using our ability to build and craft. We are artists, but we are also builders, and we’ve mastered both aspects of it. Not just the fine arts end of it.” The way Jonathan describes things, he was naturally drawn to a career in the studio his father founded. “As a child, I was always pretty amused by what my father did and very intrigued by that environment, curious to know how [things were] made. So, just hanging around, I picked up the skills and techniques.” He especially excels in creating three-dimensional works—something that comes in handy, he notes. “Everything that we do, 95 percent of the time, is much, much larger than life.” Among the few hundred pieces in Studio 3’s Toulouse Street warehouse, for example, are 14-foot medieval statues, a seven-foot tall cartoon alligator and a fiberglass crown that’s seven feet in diameter.

While Jonathan can’t predict exactly where Studio 3’s work will appear during Mardi Gras, he does know that all the walking figures in Endymion will be his studio’s creations. “We’re the ones who brought the walking heads back into Mardi Gras 20 years ago. It was an old tradition, and we revived it. Prior to Katrina, we had the largest inventory of walking heads, probably in North America, but definitely in this part of the United States.” Studio 3’s warehouse took in nearly six feet of water during the storm, and the company has been rebuilding inventory ever since. “We also lost some business, because some of the volume of our business is tied into tourism, special events and theme parties. But I see a trend of all that slowly rebuilding,” Jonathan says. “We’re sticking it out. I was given offers to buy out my business and warehouse after Katrina, and I refused to sell. I have faith in the city coming back. I have great pride in my heritage and the old country, where the craft comes from. But I’m also very happy to be able to bring it to New Orleans.”