A Conduit of Creativity and Culture 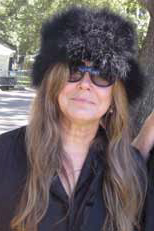 Though New Orleans native, Dawn DeDeaux, began her career as an artist at an early age with painting and sketching, over the years she evolved her creative style to incorporate sound, image, movement and technology, among other elements. Her art, though intrinsically modern in presentation, has a visceral and moving effect on its audience.

DeDeaux became increasingly interested in the concept of communications during her time in college while studying mass media, and even though she considers herself an artist by trade, the sociopolitical circumstances of the 70s and 80s proved to be interesting subjects to DeDeaux. “I think there was buried within me (even then, in the early 70s) a public artist. How do you break down an elitist barrier that can separate the art from larger audiences? I became very interested in media itself and mass communications as the fluid media, instead of paint and canvas,” said DeDeaux.

DeDeaux became involved in a creative arts rehabilitation program for the inmates of Orleans Parish, concentrating specifically on juveniles and women. Using video to tell the stories of individuals she met there, DeDeaux became enthralled with the concept of juvenile violence in New Orleans and the way in which the media influenced it.

“Mass media itself was impacting the culture and the inherent ritual of violence in the city. It seemed to be a fluid, or a conveyor. Because of mass media and the news all this information could spread like wildfire. I began to realize that this wasn’t just gratuitous violence, and that there was a sociopolitical situation feeding into it. In a way this violence was a form of protest. These kids created their own hierarchy, their own noble warrior, and they embraced human sacrifice in the form of these drive-by shootings. There was something almost Mayan or primitive about it. I got very interested in the concepts of ancient mythology and its collision with media. That was my first big comprehensive body of work,” DeDeaux said.

DeDeaux’s involvement in the city and the bond she nurtured with it as a native of New Orleans was only sharpened in the wake of Hurricane Katrina. The storm’s impact on all artists’ work in New Orleans was powerful and extreme. DeDeaux’s art was no exception.

“What started my initial shift from painting early in my career was an interest in reaching out to an audience and reaching the public. Before Katrina, I would not allow myself to go into full abstraction or something that was too autobiographical in exploration. I felt this need to outreach and connect with a larger audience. Then Katrina came along and it did two things: it destroyed my world physically, and it also prompted me to become unplugged,” DeDeaux said. “I had no technology, no projectors, no computers and no cell phone.”

Though the artist grew up in the era of abstract expressionism, DeDeaux always considered that form of art too extravagant. “All of a sudden that’s all I had to work with. There was all of this abrupt deconstruction and a sense of annihilation after the storm, and abstraction became the new representation after Katrina. So, I allowed myself the luxury to make sculpture with found objects, to just deal with what I had. After Katrina I worked with mud and plywood, and I felt this compulsion to become so hands on after being so digitized for so many years. It was very earthy and primal work.”

DeDeaux’s studio, like many structures in the city, was flooded and then burned down in the aftermath of the storm. As many artists did with any work they were able to salvage, DeDeaux turned the shards of her old studio into post-Katrina art.

DeDeaux created an installation for the Prospect 2 exhibit which was displayed until March 30 at the Historic New Orleans Collection in the French Quarter. The installation has historical overture to medieval times, yet simultaneously incorporates a lot of technology as well. DeDeaux’s work seems to inescapably connect primal and historical themes to modern technology.

“I wanted the installation to certainly go beyond ‘A Confederacy of Dunces’. I wanted to honor John Kennedy Toole. I wanted to acknowledge how hard art-making is, and how far people have to go to create art; there’s a lot of sacrifice in it. So I suppose I wanted to honor a fallen soldier. “

Everything that DeDeaux creates seems to have an inherent merger between the contemporary and the primal. Even the artist’s home is a creative collision of modern structure and an earthy atmosphere. The walls of DeDeaux’s home are open slats of wood that let the light trickle in, a design that embraces the iconography of New Orleans—light seeping in through old wood. Yet those slats are encased in clear glass on the exterior, housing the old walls in a contemporary framework. DeDeaux’s life, like her art, has become a conduit between the sociopolitical turmoil of the last four decades and the ability to move beyond that turmoil.