CEO of the Louisiana SPCA 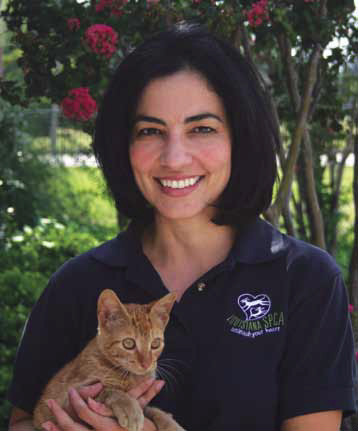 People who lived in New Orleans in the 1980s surely remember the advertising jingle for the Louisiana SPCA in which Allen Toussaint sang, “You can find a friend on Japonica Street.” Those infectious 60 seconds were wildly successful in raising locals’ awareness of the SPCA (and of an obscure street in the Ninth Ward). Katrina-related flooding totaled the Japonica Street location, and now the SPCA’s jingle has Deacon John singing about the new location in Algiers.

Along with a new facility, post-Katrina changes also led to Ana Zorrilla becoming CEO. She had been working as the director of an education nonprofit, but when the storm put its mission on hiatus, she joined the SPCA as a fundraiser. “I thought it would be short term, maybe six or eight months,” Zorrilla said.

She became devoted to her new organization. The director announced plans to leave, and the SPCA board launched a search for a new CEO but couldn’t find anyone suitable. Zorrilla decided to throw her name in for consideration and was appointed.

According to Zorrilla, the Louisiana SPCA began in the late 1800s when a group of citizens banded together to stop the mistreatment of horses and mules used as draft animals. These days, the focus is mostly on dogs and cats, but the SPCA helps out all creatures from pigs and snakes to chickens and ferrets.

“I haven’t seen any hard-and-fast data, but my sense is New Orleans has a higher pet ownership population than other communities,” she said. “And it seems many households have two, three or even four animals.” In short, New Orleans is a city of pet-lovers. For one, how many other cities have an event like the Krewe of Barkus parade where costumed pets draw big crowds and lavish media attention?

Despite our love of pets, New Orleans culture doesn’t always make animal welfare a priority. Animal overpopulation is an enormous problem here. Zorrilla says the SPCA might take in 900 animals in some months.

“People are not spaying or neutering their pets,” she said. “Many don’t think about it. I remember we had a cat and dog growing up, and our vet never talked to us about spaying or neutering animals. I didn’t realize the importance of it until I was an adult.” She added that many local pet owners consider spaying and neutering to be something only others need to do. But animals can and do escape from all sorts of households, and animal pick-ups are evenly distributed throughout the city, no matter the neighborhood demographics.

Unfortunately, many of the animals that come into the facility are put down. For people looking for a new pet, Zorrilla encourages them to look for one first at the SPCA; all kinds pass through, including pure-bred and specialty breeds. The Louisiana SPCA is also developing a program to send some unwanted animals to counterparts in northern Louisiana where overpopulation isn’t a problem.

“No one works here because they want to euthanize animals,” Zorrilla said, “but you don’t want to see them go crazy from being trapped in a cage 23 hours a day. If an animal can never have its emotional or physical needs met, we have to do what’s humane. I believe all animals have the right to a quality of life.”

Zorrilla herself has two Jack Russells and a terrier mix which she adopted last year from the SPCA.

“Sometimes you just have a connection with an animal,” she said. “There’ve been a couple of times recently where I’ve called my husband and said if this one isn’t adopted, we’re taking it. But at the 11th hour, the SPCA found them homes.”

The SPCA has plans to expand its West Bank facility with a new adoption center, as well as a spay/neuter clinic and new spaces for educational programs. The pace of the expansion, however, depends upon ongoing negotiations with FEMA regarding a Japonica-facility payout. The SPCA also needs to negotiate frequently with the City of New Orleans.

The Louisiana SPCA is unique in the state in that it is the only entity that handles municipal animal control, instead of a parish or city government. For these services, the city pays the Louisiana SPCA, but every contract renewal becomes a contentious issue.

“Funding comes from a general fund—the same tax dollars that pay for the NOPD or street repair,” she said. “There are understandably a lot of demands on this fund, but we’re not willing to compromise on the quality of our service. We need to be able to provide the humane care we think is necessary.”

With her tough negotiating skills, ongoing fundraising, community outreach efforts, and management and operations oversight for such a large and vital organization, Zorrilla is clearly on her game. Her responsibilities are all the more impressive considering that she is still in her thirties.

“Being a young CEO, in some ways it was intimidating at first. Many of my staff members are older and have been here a long time,” she said. “I don’t think of myself as an expert who knows exactly what needs to be done. My strength is bringing people together and jointly working through issues. We have committed staff, board members, and volunteers. They’re the heart of the SPCA.”

759
previous Dawn DeDeaux
next Blown Away by Carrie Underwood