Blown Away by Carrie Underwood

At the top of her game, Carrie talks music, animal advocacy and going vegan 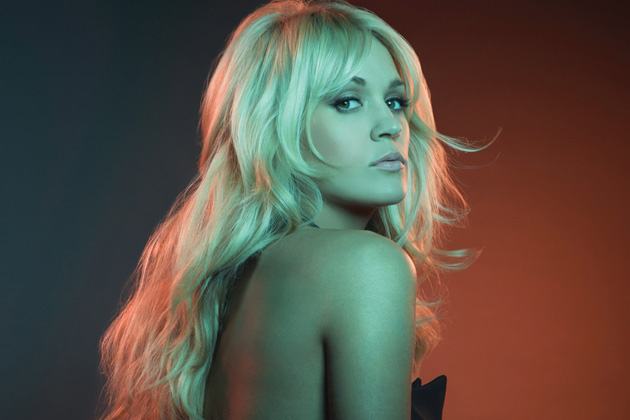 From the moment she set foot onto the glittering stages of star-maker machine “American Idol” as a naturally talented yet still unknown young singer, to her present day reign as country music’s top femme fatale and one of pop music’s ruling queens, Carrie Underwood and her stellar powerhouse of a voice have “Blown Away” her audiences. It’s no huge stretch, then, that her latest album, released on May 1 and without a doubt one of the most anticipated albums of 2012, is titled “Blown Away”. “Good Girl,” the lead single from “Blown Away” and yet another colossal song for Underwood, is the five-time Grammy winner’s fastest-selling single ever, and from the sounds of things, the two-time Academy of Country Music Entertainer of the Year will have plenty more hits spawning from her fourth studio album, adding to her impressive cache of Top 20s, Top 10s and No. 1’s. And the stunning and sexy album cover art for “Blown Away”, featuring Underwood in a high-slit ombre gown with a whole lotta leg and a grey background of brooding skies demonstrates that not only is the blonde bombshell in serious shape, but also that the material on this album will have a slightly darker theme than on her other three albums, 2005’s “Some Hearts,” 2007’s “Carnival Ride” and 2009’s “Play On,” which to date have sold over 14 million copies.

New Orleans Living checked in with Underwood, who in addition to focusing hard on conceptualizing the tracks for “Blown Away”, and performing her heart out during her 2012 Grammy duet with Tony Bennett and bringing the house down opening the 2012 American Country Music Awards with “Good Girl,” has been busy enjoying her nearly two-year marriage to Canadian professional ice hockey player Mike Fisher, an alternate captain for the NHL’s Nashville Predators. Underwood shared that she is excited to be gearing up to head down to Baton Rouge later this month for her show on Saturday, May 26 at the Bayou Country Superfest held at LSU Tiger Stadium, where she’ll perform on the same bill with other country music favorites such as Keith Urban, Rascal Flatts, Jason Aldean and Dierks Bentley. In addition to being ecstatic about getting back on the road to play her brand new music from “Blown Away”, Underwood also shared with New Orleans Living her passion for animals: rescuing them, being a great mother to her beloved dogs Ace and Penny, and refraining from eating animals as a longtime vegetarian turned newly minted vegan! For that, New Orleans Living is “blown away” by the top-of-her-game superstar for hailing as a true champion for the underdog!

Hello, Carrie! You must be thrilled about the release of your fourth album, “Blown Away”. What are the defining elements that set this particular album apart from your other albums?

I am very excited that I’ve been fortunate enough to make four albums. I feel like each one has had a different vibe to it, and this one is no different. I took a little more time writing and putting things together this time around and I feel that it really shows. There are some amazingly strong songs on this album and I am so excited to finally be able to play them live!

You are certainly a world-class performer, and you have been focusing more on writing some of your own songs throughout the years. How important has the task of songwriting become to you personally and for this album?

I really enjoy writing songs, but in the end only the best songs make it onto the album, whether I wrote them or not. I think that’s important to the integrity of the album as a whole. I want to make the best album that I can, not potentially compromise the album because I want to include my own songs. It would be easy to do that; it’s harder to make an amazing album. There are too many unbelievable songs and songwriters in Nashville to bypass.

You co-wrote the first single, “Good Girl,” off your new album, and that’s a fun, powerhouse of a song. Before I heard it, and based on the title, I thought it might be a sweet lullaby you were doing … not! (Laughs) It’s one of those warnings to women about those “no good” types of dudes, and those are some of your most fun songs. What kind of response have you gotten to “Good Girl” so far and what do you think makes it a special song?

We were just trying to write an up-tempo, in-your-face kind of song, and we succeeded! Those are the most fun to do on stage. I’m often known for big, long notes and powerhouse ballads, but this kind of song is, honestly, more difficult to perform. There are some big notes in there, and they happen so fast! And it takes a lot to keep the energy up throughout the entire song. That said, I LOVE a challenge, and songs like this one only make me better vocally!

I understand that some of the material on the new album will have a darker tone compared to the songs on your past albums.

I have always explored different directions on each album. I don’t try to make the album into something before it’s done. The songs that I write and hear and fall in love with kind of dictate what the album is going to be like. There are indeed some darker songs … kind of mini-movies in song form. They are very descriptive and tell stories that are different than any other songs that I have recorded before. Of course, there are also fun songs on the album. I try to take the album in as many different directions as I possibly can with the album still making sense as a whole.

You are amazing at performing touching songs and are able to move audiences with your talents. My mother told me she saw you perform something like “Amazing Grace” that moved her to tears. That must be a compelling feeling to know you are able to do that for others.

I just love to sing. I feel like everyone has songs and artists that really mean something to them. If I can be that artist or sing one of those songs that a few people can fall in love with, that’s an amazing thing!

You will be playing at the Bayou Country Superfest in Baton Rouge on May 26, along with artists such as Keith Urban and Rascal Flatts. What are you looking forward to most about this show, which will have tons of country fans there celebrating country music?

I’m really looking forward to performing some new material! I can’t wait to get back on the road this year and play the Bayou Country Superfest!

We actually filmed the video for my song “Cowboy Casanova” in New Orleans. We had a blast and have had fun every time we have been through the city!

You made your acting debut in the movie Soul Surfer. Do you love acting and will we see you act again in the near future?

I enjoy being a part of great projects … Soul Surfer was such an amazing story! I’m very focused on the new album right now, but hey, you never know!

We are celebrating Mother’s Day this month, and you are a very loving mamma to the fabulous Ace and the beautiful Penny, your adorable dogs! So happy Mother’s Day to you! If Ace and Penny could pick out their own gift to you, what do you think it would be? And how do they get along? Like, are they brothers and sisters or are they dating?

I bet Ace and Penny would want to take me on a picnic for Mother’s Day. We all love being outside. That sounds like a perfect day to me. Me, Mike, Ace and Penny lounging around on a hammock somewhere quiet. I would describe their relationship as brother and sister. Ace tolerates Penny, but she is definitely the annoying little sister. They play-fight all day! It’s funny.

For people who haven’t had the pleasure of having a dog as a pet, what is missing from their lives?

I have always had dogs throughout my lifetime and I couldn’t imagine a day without them. They are so happy to see me all the time! They give unconditional love … they don’t care what you do, they just want to love you and for you to love them … and maybe give them a treat or two!

You advocate rescuing animals and having them be adopted as pets. Any recent rescue stories you’d like to share? And is it true that you may be expanding your family to include some more rescued dogs?

I truly think our family will inevitably expand with pets as the years go by. I am a compulsive rescuer, and most of the pets I have had throughout my life have been ones that I took in. I just ended up with the ones nobody else wanted. The rest, I found homes for. I recently rescued a dog that was dumped on the highway. She now lives with my friend and is the happiest dog ever! She is so wonderful…I don’t know why anyone wouldn’t want her. My dog, Penny, is also a rescue from my shelter in my hometown of Checotah. I couldn’t imagine my life without her!

That is so wonderful that you rescue dogs! And when you were a teenager you were upset enough about eating animals to shun meat for good, and you become a vegetarian. Now you are rocking a vegan diet! Have you directly influenced others to give up meat, like maybe Mike?

That is such a personal decision. Every person in my life eats meat. I don’t preach to them why they shouldn’t eat meat and they don’t preach to me why I should. Of course, I would love it if Mike would not eat it, but of course it’s his decision. I will say, though, he is certainly more open to eating more vegan foods when I’m making them for myself.

Well, you are really up to a lot of good stuff these days! Tell us why it was important for you to start your Checotah Animal, Town and School (C.A.T.S.) Foundation, and why you are very proud of it.

I really appreciate where I come from. My parents still live there. I wanted to do something for the families and area that contributed so much to my success. We are trying to better the lives of some really great people! I can’t wait to see what we’re going to do in the future.