A bird of a different feather 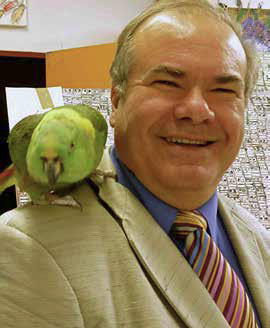 Internationally renowned artist Hunt Slonem creates prophetic paintings of the natural world: animals, humans and most notably–birds. His intrinsic connection to the earth and his surroundings forms a vivid color pallet and a unique cross between figurative lines and expressionism.

Slonem’s affinity for animals is well known and also quite obvious when you look at the subjects of most of his paintings. “I’ve lived and worked with up to 250 living birds in my studio, and I’ve collected butterflies, monkeys and rabbits. The whole ritual of feeding and living with creatures has obviously influenced my work a great deal,” he said.

Formally classified as a Neo-Expressionist, Slonem prefers to steer away from professional artistic labels; instead, gravitating towards a term that embraces a sense of the unknown. “I prefer ‘exotica.’ We’re always labeling and categorizing art, but I paint things that pertain to the spiritual: plants and animals. I meditate and work with psychics, so there are allusions to Hindu gods and goddesses, and there’s also some Christian imagery in my work. There’s a lot of gesture in my paintings,” Slonem said.

Slonem was born in Maine, but grew up traveling around the country due to his father’s military background. After receiving degrees from Tulane and Vanderbilt, Slonem moved to New York City, where he’s remained ever since. The Louisiana landscape had a lasting effect on Slonem, however, and the artist has always taken inspiration from the Acadian countryside. He now owns two plantation homes on the historic register: Albania in St. Mary’s Parish and Lakeside in Pointe Coupee. These plantations offer a pastoral setting and artistic stimulation that have resonated with Slonem since he first came to Louisiana over four decades ago.

“I bought Lakeside Plantation in 2005. The trees and earth there create a bigger connection to nature for me. I love the different kinds of flowers; reminiscent of time I spent traveling when I was younger. I grew up looking at images of Louisiana, and I used to have dreams of plantation homes when I was a child.”

As a young emerging New York artist in the early 1970s, Slonem began using Nicaraguan holy cards as his subject matter, an inspiration from earlier travels in his college days. Paintings of animals began several years later when the artist’s style began to truly evolve and solidify into what it is today: figurative expressionism with vibrant color and subject matter.

Slonem carefully maps out his canvas before beginning each piece. “I have an idea of what I’m going to be doing and I do a lot of preparation before I paint. Normally I have three to four days to finish a painting, so I start with different layers of acrylic and oil.” Slonem paints his subjects (birds, butterflies, rabbits, etc.) in recognizable settings, like cages. He has also been known to paint the human figure. He began using hatch marks in the mid 1980s, which became a representational new form for him. “I was kind of looking for a personal vision that was my own at that time. And my style really evolved in the mid 80s to where it is now. That’s when I started making these little crosshatching marks on my paintings. It felt like I was looking at everything through wire mesh in those years,” Slonem said.

Despite the allure and excitement that New York has to offer with its identity as a creative and cultural Mecca, Slonem has discovered an unavoidable realization: that the Louisiana landscape can provide infinite subject matter for an artist who is so connected with the natural and spiritual world, as Slonem so obviously is. His life, much like his artwork, is rich with color and effervescence. Acadiana has truly influenced the life and art of Hunt Slonem.