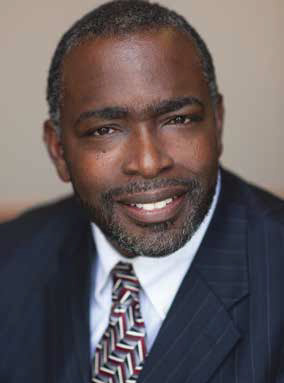 It’s tough to get people to be proactive about their health.

“Some people only think about insurance when they get sick or have an accident,” said Roderic Teamer, Sr., of Blue Cross and Blue Shield of Louisiana. “We have programs like the Louisiana 2 Step campaign that encourage people to exercise more and eat right. We want everyone to get regular check-ups so doctors can catch diseases early when they’re easier to treat. If you look at these issues through the lens of diversity, it’s important that everyone gets the same message.”

Recently promoted to Director of Diversity Programs and Business Development, Teamer has taken charge of Blue Cross’ diversity programs. These duties are joined to his role of bringing new insurance customers into the Blue Cross fold, typically through employers and HR departments.

“From a marketing standpoint, we want the community to know how much we do in the area of diversity,” he said. “Diversity makes good business sense. It matters to people and can help tip the scales in our favor.”

Blue Cross currently supports a number of diversity initiatives, and an important one concerns the recruitment of a diverse workforce within the company and in health insurance sales. Blue Cross also sponsors monthly celebrations to highlight the different heritages of its employees. One program might focus on African-American history, while another highlights Hispanic culture.

“The goal is to help people understand that although we have different backgrounds, our similarities are greater than the things that separate us,” Teamer said. “The differences in our culture are what make us a stronger workforce.” In the same vein, to increase diversity in its supplier network, Blue Cross looks for opportunities to work with minority and women-owned businesses.

The company also wants to make sure that it is offering its health insurance products to as many people as possible. That goal involves focusing on health issues that particularly affect minorities, such as preventable cancers, diabetes, heart disease and obesity. Blue Cross supports organizations, programs and events that call attention to these medical problems and that promote healthier lifestyles.

One more thing Blue Cross does is encourages doctors and hospitals to be “culturally competent,” which means they should have the facilities and resources to serve people from different backgrounds. For example, New Orleans has a large Vietnamese population, whose older members may not know English, and some members of the African-American community by nature are not comfortable with doctors. Teamer said Blue Cross works with local medical communities to overcome these barriers.

Since he joined Blue Cross, Teamer’s business development role has led to his involvement with many community and civic organizations. He has been active with organizations such as the New Orleans Chamber of Commerce, Covenant House and Daughters of Charity. This is familiar ground for him, since the roots of his career are in the nonprofit sector.

Teamer spent a dozen years working as a fundraiser for United Way and later spent about the same amount of time serving as the executive director of a small nonprofit called Inroads, a career development program for minority students. “That was an enjoyable job,” he recalled. “I got to see young people transform from high school students with potential into successful professionals in the workplace.”

Because Inroads was small, Teamer wore many hats, handling everything from mentoring young people to troubleshooting computers. Moving to Blue Cross, with over 2,000 employees statewide, was quite a change because employee roles are more specialized. Teamer now draws on his experience in sales, marketing, building relationships and networking.

Teamer grew up in Gentilly close to the Dillard University campus where his parents both worked. He knows he benefited from spending his formative years in an academic setting, but when it came time to go to college himself, he wanted to get away. “Going to Dillard would have been the same as staying at home. Everyone knew me there,” he said. “But no one knew me at LSU. I wanted to have a different experience. I wanted to make it on my own.”

Teamer finds himself in Baton Rouge a lot again these days, frequently commuting to the Blue Cross corporate headquarters. Thanks in part to the building’s visibility and its large number of employees, Blue Cross has strong brand recognition in the capital city. By contrast, the New Orleans staff is smaller and tucked away in an office tower. So Teamer’s diversity programs and involvement in the nonprofit world serve to raise the company’s profile in the local New Orleans community.

The frequent commuting to Baton Rouge hadn’t been great for his health, and in his new role of encouraging healthy lifestyles, Teamer has been taking his own message to heart. He started a personal fitness program and has lost 30 pounds by working out and eating better, including healthy snacks as he travels in the car between Louisiana’s two largest cities. Teamer aims to practice what he preaches. He needs to be proactive about his health too.