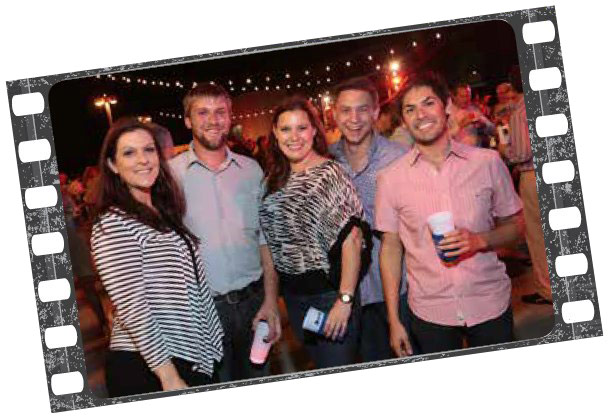 On a beautiful October evening, 1600 people of all ages convened on the rooftop of the East Jefferson General Hospital Esplanade Garage overlooking the entire city of New Orleans and beyond to sample beers and listen to the spirited tunes of some of New Orleans’ most iconic bands. The event caused such a scene that an extra $5000 in ticket sales came from those sold to people who saw and heard what was happening from down below, and couldn’t resist coming up to check it out.

The “scene” that caused such a commotion was the Up on the Roof event, the beer-tasting extravaganza that has grown exponentially each of the six years it has been put on by the Foundation at East Jefferson General Hospital. The event was presented by Crescent Bank and Trust, and this year it raised an incredible $135,000 to support the hospital’s community healthcare efforts.

The climax of the event was the presentation of a $1 million check to Dr. Mark Peters, President and CEO of EJGH. The gift represents a third of the $3 million raised over the course of a three-year capital campaign. This disbursement will kick off expansion and modernization of the MD Anderson-affiliated Outpatient Oncology Infusion Center at the Yenni Treatment Pavilion. The newly renovated center is slated to provide the ultimate in patient care, with expanded space for both patients and accompanying family members and inclusion of physician offices and a dedicated pharmacy that will greatly reduce waiting time.

“I could not be prouder of the generosity of our capital campaign donors and the entire community for making the commitment to keep world-class cancer care right here at EJGH,” said Carolyn Chassee, CFRE, President and CEO of The Foundation at EJGH.

About The Foundation at East Jefferson General Hospital

People are not always aware of the financial needs of a hospital. For most of us, hospital visits are infrequent, so the institution is not top of mind on a daily or weekly basis like a school or a church might be. Because EJGH is a community owned, not-for-profit hospital, it relies heavily on philanthropic support to provide the highest quality, compassionate healthcare.

The mission of The Foundation at EJGH is to generate philanthropic support for the hospital through education, communication and active ambassadorship to the community. “The Foundation at EJGH has always provided vital support to our hospital and has been a driver for improvement throughout our history,” said Dr. Peters.

Opportunities to give are plentiful. Benefactors donate individually, corporately or by sponsoring. Some designate their gifts for a specific initiative or campaign, while others give in honor or memory of a loved one. In addition to Up on the Roof, The Foundation hosts two popular spring fundraisers: the Lympho-Maniac 70’s Party and the EJGH Foundation Golf Classic.