Where to Dine on the Last Night of the Year 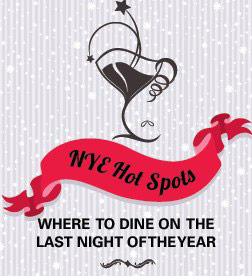 Arnaud’s
One of the “grande dames” of New Orleans, Arnaud’s has been serving classic Creole cuisine since 1918. Open for nearly a century, this well-known eatery still impresses guests today with dishes like Crab Claws Provencale and Speckled Trout Meunière. Dinner offered nightly; jazz brunch on Sunday.

Tujague’s
Pronounced “two-jacks,” this Creole restaurant is the second oldest in the city. Located directly across from the French Market on Decatur Street, Tujague’s unassuming style is popular with both locals and tourists. On New Year’s Eve, you can enjoy four courses starting with Shrimp Remoulade and finishing off with Banana Bread Pudding. Open nightly for dinner and lunch on Saturday and Sunday.

Morton’s, The Steakhouse
This Chicago-born steakhouse chain is immensely popular down here in New Orleans thanks to the perfectly cooked steaks and mouth-watering sides it serves up. Located at One Canal Place close to the Mississippi River, Morton’s offers a New Year’s Eve menu featuring dishes like Baked Five Onion Soup, Double Cut Pork Chop with Scampi Butter and Key Lime Pie. Open for dinner nightly.

Cafe Adelaide & Swizzle Stick Bar
Named after Adelaide Brennan, who is recalled by family members as “Auntie Mame and then some,” Cafe Adelaide has come to symbolize the good life and vivacity as reflected in its namesake. Chef Chris Barbato has created a holiday menu with dishes like Louisiana Blue Crabmeat & Caviar, Pork & Foie Gras Dumplings and Chocolate Caramel Doberge Cake. Open for dinner nightly, breakfast daily and lunch Monday through Friday.

Bombay Club Restaurant & Martini Bar
Swanky and sexy, the Bombay Club is both restaurant and bar, and brings the feel of a British gentleman’s club to the corner of Conti and Toulouse Streets in the French Quarter. Executive Chef, Ricky Cheramie, a beloved local hailing from Lafourche Parish, offers a menu featuring ambrosial dishes like Crispy Popcorn Sweetbreads and Grilled Swordfish with Shrimp Boulette. Open for dinner nightly.

The Grill Room at the Windsor Court Hotel
Recognized by Forbes Magazine as one of the most delightful fine dining establishments in New Orleans, The Grill Room possesses a certain unsurpassed elegance that is bound to impress. Recently appointed as the new Executive Chef, Kristin Butterworth offers a delectable menu featuring dishes like Braised Pork Belly and Apple Tarte Tatin with Rum Raisin Ice Cream. Open daily for breakfast and dinner; lunch served Monday through Saturday.

Martinique Bistro
Mere blocks from Audubon Park & Zoo on Magazine Street, Martinique Bistro is a quaint Uptown restaurant serving an eclectic menu that leans mostly toward French cuisine. In the courtyard, a small fountain plays softly while diners delight in dishes like Prince Edward Isle Mussels “Cotriade Bretonne” and Seared Sea Scallops with citrus-squid ceviche and an edamame-cilantro puree. Open for dinner Tuesday through Sunday; lunch on Friday; brunch on Saturday and Sunday.

Bayona
Distinguished by Conde Nast in 1993 as one of the top places in the nation to dine, Chef Susan Spicer’s flagship restaurant is still an immensely popular spot located inside a 150-year-old Creole cottage in the French Quarter. Bayona’s signature dishes include Veal Sweetbreads and Sautéed Pacific Salmon.

10. In the middle of Frenchmen Street with music pouring out of the clubs and onto the pavement

9.  In front of Popp’s Fountain in City Park

8.  Strolling along the Riverwalk while watching the river roll by

7.  Inside Preservation Hall while enjoying the smooth sounds of jazz

6.  On the rooftop of the historic Hotel Monteleone

5.  Riding the St. Charles Streetcar as it clatters toward the Riverbend

4.  Secluded in an intimate corner of one of the French Quarter’s many lush courtyards

3.  Riding through the Vieux Carre on a horse-and-buggy made for two

2.  Aboard the Paddlewheeler Creole Queen as it glides down the mighty Mississippi River

1.  In front of the St. Louis Cathedral in Jackson Square