We think more about sparkling wine this time of year, as it’s the festive choice for celebrations from Thanksgiving through the New Year. Sparkling, or carbonated, wine was first documented in 16th-century southern France. Like many inventions, it comes with its own set of legends, including scientists, fermentation techniques, exploding bottles, glass makers, ties with royalty and luxury, and yes, a monk named Dom Pérignon.

Centuries later, regions from around the world make their own varieties of sparkling wine. Many consumers mistakenly refer to all sparkling wines as Champagne, though that label really only describes grapes grown in a specific French region

We’ll start there, and then go around the world to bring you other regional styles of sparkling wines: 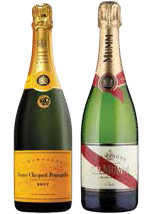 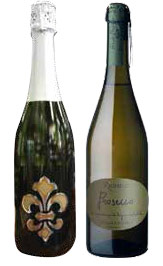 This Italian’s carbonation is completed in tanks rather than individual bottles, making the sparkler a less expensive option. Tank fermentation also supports bottling at different stages of fermentation, which means prosecco can come in varying states of fizziness. 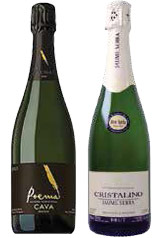 White grapes from the cool Rioja and Catalonian regions of northern Spain fuel this style of sparkling wine, which generally has a perfumed, floral nose and acidic fruit palate (sweetness varies between brands). Makers use the méthode champenoise, giving it the same tight little bubbles you see in Champagne.

Poema Cava Brut
Layers of flavor include orange rind and spice that persists through an elegant finish.