“Candide” at the Loyola Opera Theatre

On Friday January 18 and Sunday January 20, the Loyola Opera Theatre, backed by the largest orchestra ever used in one of its productions, will present Leonard Bernstein’s perennial favorite “Candide.” 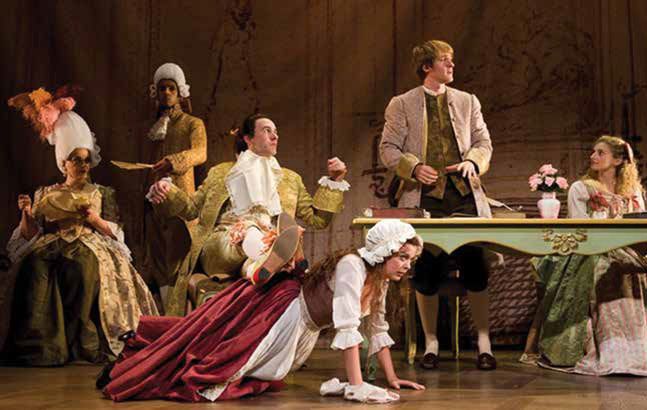 Recently, I interviewed Carol Rausch, the production’s music director and conductor. As well as being the opera and vocal coach at Loyola, she is the chorus master, music coordinator and education director for New Orleans Opera and the chorus master and music administrator for the Chautauqua Opera’s summer festival, located in upstate New York.

BH: You’re from Ohio, and you obtained your undergraduate degree in Indiana, then traveled around a bit before settling in New Orleans in 1994. What brought you here?

CR: I’m from Columbus, OH, and did my undergraduate degree in piano at Indiana University. Then, not sure what I wanted to do, I came home and did a master’s in music and worked toward a doctorate at Ohio State University in my hometown. A year abroad (in Brussels, Belgium) as a Rotary Foundation Graduate Fellow convinced me I should be working in opera. I lived in Miami, FL, and Norfolk, VA working for companies there before finding out about the chorus master opening at New Orleans Opera. I moved to the city in May 1994 and started work at the company that fall.

BH: You work in the music department at Loyola and at New Orleans Opera. What does your work at Loyola entail?

CR: I’m director of Loyola Opera Theatre. I pick the projects for each academic year—usually one fully staged production with orchestra, a scenes program and a concert of opera excerpts. I prepare the students musically, and also accompany at the piano or conduct each of these events. There’s also a lot of less glamorous, behind-the-scenes work: scheduling, ordering costumes, picking up props from the New Orleans Opera Scenic Studio, etc.

BH: I understand this is the largest orchestra used in a Loyola opera.

CR: We have more brass in this production than normal, and we haven’t had a tuba before! And there are all kinds of percussion—a huge array that will take three players! The collaboration is special. Former dean of the college of music, Ed Kvet, put in place a kind of mentoring system some years back. So, if there are two flutes, flutist Patti Adams of the Louisiana Philharmonic Orchestra (LPO) and one of her students will play. Former LPO concertmaster Amy Thiaville will act as our concertmaster, with several of her students in the section. It works so well; students who haven’t played opera before get a shot at that, and we can get a fine sound from the pit!

BH: Leonard Bernstein made his reputation in both classical music and musical theater. “Candide,” an opera, seems to bridge the genres a little. Do you agree?

CR: Yes, “Candide” brilliantly bridges the gap between opera and Broadway. I think many more people know Bernstein for “West Side Story,” although he wanted to be known just as much for his symphonies and other classical compositions.

BH: The story of “Candide” will be familiar to many who read Voltaire in high school. Many people also may have at least a passing knowledge of the opera or some of its more famous numbers. What can you say, briefly, for those less familiar with the show?

CR: Even if you haven’t read the Voltaire or seen “Candide” before, you can relate to the characters who careen through a series of crazy adventures all over the world, suffering heartache and disillusion, overcoming setbacks and finally gaining wisdom and acceptance of who they are in life. And all of this is set to a wonderful, inventive musical score!

226
previous Vulcan’s Forge
next March Arts: Two Performances Not to Be Missed