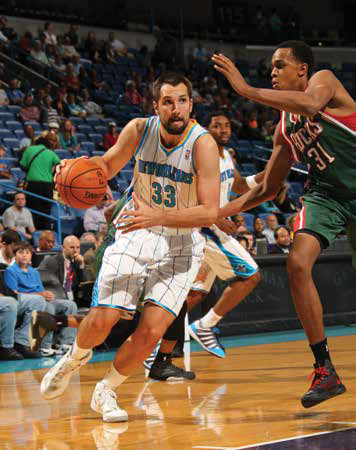 It’s New Orleans Hornets forward Ryan Anderson’s job to stay fit, healthy and agile for his career on the court.

At the University of California, Anderson became the first player in the school’s history to record at least 600 points and 300 rebounds in a single season. As a freshman, he led the Bears in both scoring and rebounding, finishing fifth in the conference in both categories. Prior to the 2012 Olympics, Anderson represented the NBA in China while participating in NBA Fit clinics, interacting with Chinese youth in Dalian, Bejing and Guangzhou.

Off the court
Although playing basketball is his greatest love, the 6–foot–10–inch star also enjoys golfing and boxing. He finds boxing an especially fulfilling workout, extremely effective for both cardiovascular and muscular training. “Boxing is a great full–body workout.”

Eating right
Because of the high level of activity required for basketball, Ryan maintains a diet high in protein and carbohydrates. A typical day consists of eggs and turkey bacon for breakfast, soup and sandwich for lunch and meat, potatoes and salad for dinner. He also enjoys cooking for friends, and says he’s “a big Food Network kind of guy”. When planning to cook a meal, he often shops at Rouses, and values its cleanliness and wide selection of fresh produce.

Indulging occasionally
Despite the fact that Anderson arrived in the Crescent City as a big sushi fan, he quickly embraced the local food with open arms. “I love New Orleans cuisine and trying out different restaurants around town,” he says. He can’t seem to get enough of our barbecue shrimp, and is manic for the muffuletta. Ryan also has a sweet tooth, and really enjoys sweet, chewy and tangy Sour Patch Kids candy.

371
previous New Year, New You!
next 3 Simple Tests to Check for Kidney Disease