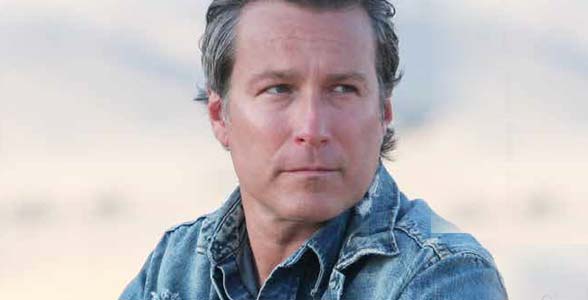 The Rocking Renaissance Man of Movies, Television and Music Releases his Impressive Second Album, “Leaving Nothin’ Behind,” Signs Up to Star in “NCIS: Red” and Dishes about Good Times Spent in New Orleans

John Corbett is mainly known and loved for all those darling, committed, patient, nice guy/boyfriend types he’s played so adeptly throughout his strong acting career, including roles as the sweet, sincere Aidan Shaw on “Sex and the City,” and the kindhearted Ian Miller in “My Big Fat Greek Wedding.” But Corbett’s innate artistry and creative expression definitely do not stop at Hollywood! The native West Virginian has proven that he’s a good guy on the music landscape as well, thanks to his impressive talent, on full display on his country rock debut album, “John Corbett,” released in 2006, and now again on his sophomore album released on February 5, “Leaving Nothin’ Behind,” certainly a labor of Corbett’s musical love worthy of sticking in the dash and cranking up for long drives down dusty highways. With Corbett’s golden vocals handling honest, heartfelt lyrics about life’s ups and downs, layered atop a nice dose of acoustic guitar sound, the result is an admirable project rich with a rootsy, gutsy, soulful Americana vibe, deserving of the critical acclaim due heavy-hitting artists.

“New Orleans Living” enjoyed a spirited conversation with the charming, good humored and down-to-earth Corbett, whose lust for life is refreshingly intact. He was on the cusp of the release of “Leaving Nothin’ Behind,” and about to land an exciting deal to star as lead man, Roy Quaid, in CBS’ “NCIS: Red,” which will air this spring on an episode of “NCIS: Los Angeles” as a potential spinoff of the successful series.

Corbett was fired up about his brand-spanking new music, and also about his time spent in New Orleans, most recently at the tail end of the 2012 filming of “The Lookalike,” an upcoming comedy about two criminals searching for a drug lord’s lookalike love interest after the unexpected death of the girl who held his attention. In between filming and notable voiceover work for major brands like Walgreens and Applebee’s, Corbett will head out on the road with his band to bring his music live to old and new fans. Fingers are crossed that he’ll make it to town soon with his guitar in tow to rock a New Orleans stage!

Hey John! Between your new album, “Leaving Nothin’ Behind,” and your first album, “John Corbett,” you have really carved out your own distinctive sound—and it rocks! You obviously choose songs to record that really move you.

Cool, thank you Christine! It’s kind of like movies in a way; when you read a script, you just get it. You identify with something in it and you want to play that role, or you just shrug your shoulders and say, “Eh, I don’t really have a connection to it. No thank you.” I do write songs, but all my songs are just bad compared to guys like Jon Randall, who produced my record and wrote seven of my ten songs. I go with the better songs always, so that means none of my songs will probably ever end up on my record. Other people tell better stories in three minutes, and I can better identify with those songs.

Since you often play the sweetheart boyfriend and good guy types of roles, perhaps it was somewhat refreshing for you to record some of the songs on “Leaving Nothin’ Behind” with darker themes like death, drinking and murder.

Yeah! If I had my way, those are the kind of movies that I’d be in too, but I’m not an actor like Ben Affleck, who I love, and who produces, directs and puts himself in movies. I just don’t have that drive that he has as an actor. I wait for the phone to ring from somebody who thinks I’d be good in their project, and for me that usually means somebody wants me to be in a G-rated movie playing a nice guy getting the girl in the end. Although, in the movie I just made in New Orleans around Christmas, I got to be a drug dealer who kills people, takes them out to the swamp and feeds them to the alligators! I like those bad guy movies and I want to play those roles, but they don’t always come my way, so I’m not going to make a record about unicorns smoking a peace pipe under a rainbow!

In the movie you recently filmed in New Orleans, “The Lookalike,” you play Bobby, so congrats for landing that bad guy role. Did you also film the portion of “The Lookalike” that was shot in the Bahamas?

Nope. I only kill people in the city and dump ‘em in swamps! (Laughs). I had the best time in New Orleans. I stayed at the great Hotel Monteleone and man, I was down in that Carousel Bar every night having a cocktail, spinning round and round! It was the best! I did a TV movie over a year ago called “Ricochet” in New Orleans and I stayed at Loews and it was a great hotel. I’d go to Ernst Café a lot—wow, that’s my favorite little hang! They make such a great burger! But staying right in the Quarter is the best. Me and Jerry O’Connell, who’s a great actor and a buddy of mine and also in “The Lookalike,” would be out every night just walking the Quarter, getting a few cocktails, grabbing a bite—that was living for me, because the town where I live out in the country in central California only has a few thousand people and it rolls up at 9 o’clock at night. So to be in that action is like a dream come true for me!

It’s a great balance to be able to live that calm country life and then turn around and be all up in the primordial ooze of New Orleans, taking in all those sights and smells, like on Frenchmen Street.

Oh yeah! I could go for some of that Super Bowl or Mardi Gras type action right now! I would love to be there, feeling that energy! I got hip to Frenchmen Street after somebody told me about it while I was doing “Ricochet.” I took a long walk over to Frenchmen and I fell in love with it. So when I filmed “The Lookalike,” me and Jerry O’Connell would walk there four or five times a week and hear some amazing music. I love Bourbon Street, but the music gets to be a little bit predictable. You can walk a few blocks and hear “Mustang Sally” three times, you know? On Frenchmen Street, you hear such original, different stuff.

Getting back to “Leaving Nothin’ Behind:” I love this album! It’s a winner. It’s got some real Texas flair to it, with a smidge of Nashville too. That dirt road feel is definitely on this album. Some of it sounds like music Pat Green might record.

Thanks so much! And that’s funny you say that because Jon Randall is producing Pat Green right now, and in fact, when my first record came out, a lot of people compared the song “Good to Go” with a Pat Green song, which doesn’t hurt my feelings at all. I love Pat Green! And for the first single off of the new album, I thought about putting out “Name on a Stone,” but it was so much like “Good to Go” both musically and message-wise and I just wanted to do something different. “Me and Whiskey” was a little more up-tempo, fun and not a “message” song. It starts out with this bass beat I like, and it’s in the chord of D, so it’s the first single. I’m not reaching out to country radio as much as I’m going down the Americana line this time, and that’s always been one of my favorite genres of music. I’m hoping to get a little Americana radio play.

Was music your first love, before acting?

I love acting too, but let’s say four actors came to my house for dinner; we’re never going to get together and do a scene just for fun. “Hey, everybody, let’s sit in a circle like an old-time radio thing and let’s do a scene! Let’s do that scene from ‘Silence of the Lambs!’” It’s just never going to happen! But if I have four guys who come over to the house that know how to play guitar and there are four guitars sitting in my living room, which there always are, there’s no way that somebody’s not going to grab a guitar and we’re not going start singing some Eagles songs. That’s just the way it’s going to go down. I wouldn’t call people into the living room to listen to me do a monologue from “Macbeth.”

Well, you’re lucky to have found different outlets for your creativity. You told me a few years ago, after your first album, that there would be 600 women and 10 guys at your concerts! Has that changed?

Yeah, funny enough, it did, especially when we’d go back to a city to play a second, third or fourth show. I’d notice more and more guys there. When you’re an actor and you’ve been on “Sex and the City,” other guys who really like music can think, “Oh, I know what this guy is doing up there,” but once they see us, they see that we’re four guys up there just playing our music and not some Shaun Cassidy, Leif Garrett kind of thing. The show isn’t geared toward women or me being on “Sex and the City;” people maybe came out to see that person the first time around. I’m a pretty good singer and a pretty good guitarist, but I am the worst one in the band! My guys are really good musicians and when others see us, they see that our lead guitar player, Tara, is amazing. He almost always gets a standing ovation when he really lays it down.

When I heard your voice on the “At the Corner of Happy and Healthy” commercial for Walgreens, I was like, “Cool! I’m going to Walgreens! That voice is telling me to get to Walgreens!” (Laughs).

That’s what’s called a blessing! It’s a blessing for any solid working actor who feels he’s just lucky to be working. If you get a phone call from a national brand like that and they want you to be the spokesman, you just thank your lucky stars and say “Yes, please!” and “What time should I be there?” And I tell you, Walgreens is the only place I shop, and the only place I will shop until they hire someone else! (Laughs).

You’ve been to Mardi Gras before. Next time you’re here for it, what will you costume as?

I love Mardi Gras. It’s just completely insane! I’d want to be comfy and not too hot, so I would not want to wear a latex Batman outfit. I’d be an old Western bank robber. That way I wouldn’t have to buy anything new because I only like to wear my old clothes that I’ve been wearing for twenty years. I’d wear my old cowboy boots, a cowboy hat and I’d put a neckerchief around my nose and people would think I had a costume on, and really I’d just be grabbing old stuff from around the house to throw on, and I’d be really comfortable and wouldn’t be sweaty.