The latest boom in the Bywater is Mariza, a brand new restaurant that features “honest, unfussy Italian cuisine,” created by Chef Ian Schnoebelen of critically-acclaimed Iris Restaurant in the French Quarter. 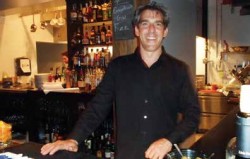 Located on Chartres Street inside the Rice Mill Lofts, Mariza is filled with soaring windows, exposed brickwork and massive wooden beams—a rustic and comfortable space in which to indulge in dishes of House-Cured “Salumi,” Tuna Carpaccio, Hanger Steak and Braised Lamb Belly.

There’s increasingly more bustle on Freret Street, including the recent opening of the upscale sandwich shop Wayfare. Ray Arnona, his daughter Toni and son Vincent, are managing the new restaurant, much like their other family business on the Westbank, Vinnie’s Sports Bar & Grill. Wayfare offers hand-crafted artisan meats and cheeses built into mouth-watering sandwiches like a Salumeria, featuring salami, coppa, soppressata, pickled banana peppers and provolone.

The newly opened PubliQ House is yet another Freret Street hotspot, this one a venue at which to enjoy local music like the Brass-A-Holics, New Orleans Nightingales, Colin Lake and Johnny Sketch & The Dirty Notes. Although owner Rhett Briggs‘ new establishment does not come with a kitchen, the PubliQ House’s parking lot is giving it up for local food trucks like Frencheeze, Rue Chow, the Fat Falafel and La Cocinita.

The construction has finally stopped and the doors have opened upon the newest addition to the roaring burger scene in New Orleans, Charcoal’s Gourmet Burger Bar. Located on the corner of Jackson and Magazine Streets, owners Craig Walker Jr. and Blaine Prestenbach opened the city’s latest burger joint last month on Valentine’s Day. Their restaurant features a build-your-own-burger bar beginning with patties ranging from bison and venison to shrimp and elk. The bottom floor will offer counter service while the upstairs area will go over the top with sit-down service and a wrap-around balcony.

Only a few blocks from the Superdome, owners Dr. Nicolas Bazan and Tim Clark have opened the Little Gem Saloon. In both décor and entertainment, Little Gem Saloon pays homage to the days when the 400 block of Rampart was a Mecca for jazz and ragtime music. The 20th century, Spanish-revival building features nightly performances by local and out-of-state musicians plus tasty cocktails and cuisine. Little Gem Saloon’s Chef Robert Bruce is offering classic Creole cuisine with dishes like Daube Glace and Brabant Potatoes, plus several favorites from his family’s former restaurant, Maylie’s, that closed in 1983.

Finally, everyone’s excited about the Link Restaurant Group‘s plans for another restaurant dubbed Peche Seafood Grill that will hopefully be opening this spring. The eatery is the collaboration of three of the city’s favorite chefs, Donald Link, Stephen Stryjewski and Ryan Prewitt. The trio’s new concept was inspired by a recent trip to Spain and Uruguay. Peche will be located in a restored, 19th century building on the corner of Julia and Magazine Streets in the Warehouse District. The menu will focus on fresh, local seafood cooked over an open fire, a feat that diners will be able to witness first hand.