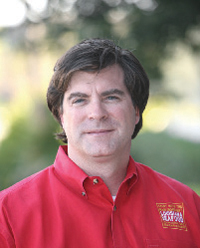 Marketing Board. “It doesn’t hurt that we have great products to start with.” As one can tell from his title, Smith’s focus naturally is on shrimp, crawfish, oysters and all the other delicious edibles that live in Louisiana waters. The overarching goal of the Louisiana Seafood Board, which is funded by a percentage of commercial fishing license fees and by federal grants, is simply to promote Louisiana-produced seafood all over the country. To meet this objective, the board serves as a liaison between the industry and government entities while spearheading educational and promotional programs.

How does Louisiana Seafood promote Louisiana seafood?
We do some advertising on TV, billboards and the radio, but we also stage many events that get media attention. Our flagship event is the Great American Seafood Cook-Off.

What’s the cook-off like?
We’re now in our fifth year. Basically, it started when we had our governor issue a challenge to all the other 49 governors to send their state’s best chef with their state’s best seafood. The first day of the cook-off, the chefs cook their masterpieces, and the second day the focus is more on what people can cook at home. The judges come from all over America, and the winner of the contest is crowned king or queen of American seafood. John Besh from Louisiana won the first year, but other winners have come from Texas, Georgia and Florida. The event is covered by the Food Network. It shines a spotlight down on New Orleans and the state’s seafood.

Now, instead of having governors choose the chef, the Great American Cook-Off is spawning state cook-offs. We’re having the first annual Louisiana one at the Wine and Food Experience in May, and the main event will be in August.

Does the board run other promotionalevents?
Yes, many others. In March, we had the world’s biggest oyster po’boy on Bourbon Street with 5,000 to 6,000 deep-fried oysters. It’s given away to the
public, but the retail value of this po’boy would be $30,000.

The ultimate goal here is to drive the sale of oysters. These events work because they capture the attention of the consumer and the media. For example, this year we’re bringing back our oyster-eating contest, which we haven’t had since Katrina. The winner of the first year’s competition who calls himself Crazy Legs Conti was later booked on Letterman. In the show, they cut to Crazy Legs slurping down oysters at commercial breaks. Eventually, Letterman had someone bring him a plate of oysters. And the next week, I had suppliers calling me in disbelief asking why their sales were suddenly spiking.

What sort of challenges is the localseafood industry facing?
In the bigger, long-term picture, it’s that we’re facing pressure from global imports. We can’t compete on the commodities market. So without a price advantage, our job is to focus on what’s positive about local seafood. For one, imported seafood is mostly farm raised, but wild-caught products from Louisiana have a superior flavor. Two, with local seafood, you know the source. With overseas products, there are a lot of questions and safety concerns. Consumers will pay a little more for local products and their advantages. We’re developing a certification program with a logo so people will know what they’re buying.

And the short-term challenges?
Well, we’re still recovering from Hurricane Katrina. The conservative estimate is the local seafood industry was hit with over $1 billion in damage. Over 3,000 commercial vessels were washed up. Docks and infrastructure were devastated. I grew up in Lakeview, and I tell people what happened there was mild compared to what happened in some fishing communities.

How’s the recovery doing?
People are still struggling without question. But we’re looking at opportunities to do things differently, and resources have returned. We’ve had some strong years for the production of shrimp and oysters. There are fewer people fishing, but those out there have caught a ton.

What sort of aid has the industry received?
The board has made multiple trips to Washington, D.C., to secure funds, and the state has received some $90 million from the federal government. First, we got $50 million for clean-up and infrastructure repairs, and this spring $41 million is coming down for direct assistance to fishermen. There’s a lot of them on the edge. Without fishermen, we’d be nowhere. It’s hard to get people into the industry, but those who are in it love it. There are sixth- and seventh-generation fishing families in Louisiana.

What about environmental issues? I’ve been hearing about the Dead Zone.
The Dead Zone is certainly our concern. It’s a large and growing area in the Gulf where no life can live. It’s primarily caused by fertilizer runoff into the Mississippi. We’re working with advocates in that area. The other big environmental issue is coastal wetlands loss. With the new governor, we’re seeing some positive steps there. People need to keep in mind how important the Louisiana seafood industry is. Our state is the source of one-third of the country’s domestic seafood supply.

Anything else you’d like to add?
Make sure when you go out to dine or you buy seafood at the store that you ask for, no … that you demand Louisiana seafood. It tastes better, and you’re helping to keep our culture and heritage alive.