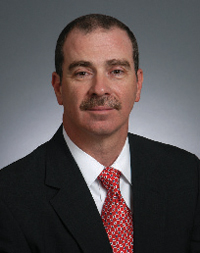 “It’s a long way from the Ninth Ward to the top of One Shell Square,” marvels Frank Glaviano Sr. at the trajectory his life has taken. An employee of Shell for more than 30 years, Glaviano began at the energy corporation as a college summer intern and steadily worked up to his current position of vice president of production for the Americas. He is the highest-ranking Shell employee based in Louisiana.

“I’m a type A individual. I set goals and try to reach them,” he says. “When I came to Shell, I set my sights on this particular job as a dream. I considered it a lofty goal. But I figured if I aimed far, I could at least get part of the way there. I ended up making it all the way.”

Glaviano is in charge of crude oil and natural gas production for the Americas and oversees 1,000 people from Alaska to Argentina. Some of the oil fields in his region are directly operated by Shell, he enrolled in Tulane University where his ambitious temperament fully bloomed and pushed him to take an accelerated course load. He received both a bachelor’s in electrical engineering and an MBA within five years. Meanwhile, he was working one or two jobs at a time—positions like forklift operator, truck driver and house painter—and spending a couple of summers in Shell’s corporate offices.

At the time, in the mid-1970s, the young engineer was impressed by the scale of the projects Shell was Glaviano is in charge of crude oil and natural gas production for the Americas and oversees 1,000 people from Alaska to Argentina.
while Shell just has an interest in others. In any case, Glaviano travels quite a bit—across North and South America, of course, but also to Europe and the Far East and places in between. All the while, he keeps his feet firmly planted in New Orleans.

Glaviano spent his boyhood on Pauline Street, in the Bywater. His family later moved to New Orleans East, but he kept his roots in the Ninth Ward by choosing to attend Holy Cross School. From there, involved in, although they would be considered small today. Thirty years later, Glaviano is still proud of the corporate culture of which he has become a part.

“People will do the right thing, even when no one’s looking,” says the executive. “That’s a core value we’re always striving for.” In particular, this value concerns keeping work sites safe and maintaining environmental standards.

He’s also proud of Shell’s involvement in New Orleans and Louisiana causes. He explains the first thing the company did after the storm for the city was to move back when others were abandoning it. The firm reopened its downtown tower, an important anchor of the Central Business District, while giving its employees no-interest loans and time off to fix their houses. “After Katrina, we realized we couldn’t fix our business until we fixed our people,” Glaviano says.

In the corporation’s philanthropic efforts, he explains the motive is to help the city in four areas: its economy, its infrastructure, its educational system and its culture. One of the company’s highest-profile beneficiaries is the New Orleans Jazz & Heritage Festival for which Shell is a presenting sponsor.

“There are lots of sponsors of Jazz Fest, but we came in at a significant level. That’s why you’ll often hear ‘Jazz Fest presented by Shell.’ It’s the coolest thing we’ve ever done, and you don’t hear about anything cool too much in the oil business,” he says, adding that helping Jazz Fest fulfills at least two of the four designated philanthropic areas, the economy and the culture. “We need to help New Orleans stay New Orleans, or what’s the point of being here? If you strip away the culture, all you have left is a bad piece of real estate.”

Some other recipients of Shell’s largesse, to name just a few, are the New Orleans Police Foundation, Louisiana ArtWorks, the Lakeview Improvement Association, and the Eleanor McMain Secondary School for which the company funded science and math labs. Glaviano says Shell often just grants money, but he prefers it when funding is tied into volunteer efforts. Shell gives its employees paid time off if they choose to volunteer at Jazz Fest, to build homes in the Musician’s Village or to otherwise help out at whatever cause is on the approved docket at the moment.

“We need to make New Orleans more than a tourist destination. It needs to become a place where people want to live,” says Glaviano. “We all know what the problems are. I’ve spent too much time in conference rooms with people like myself discussing the problems. Everyone needs to shut up and do something.”
Glaviano believes that things are indeed happening. Despite the feeling among some locals that the rest of America is tired of hearing about Katrina, there’s a lot of boots on the ground from elsewhere, and improvements are being made internally. He cites the rebuilding of the Superdome as one of the city’s greatest recent triumphs.

“The way you see progress is you draw a fence around a specific problem and tackle that. Don’t try to boil the ocean,” he comments. “The process is long and slow. I never set my sights on a quick recovery.”