Pipeline to the Public

Many organizations and individuals in the Greater New Orleans area have reevaluated their lives in the two and a half years since nature and subsequent flooding had its way with the city. 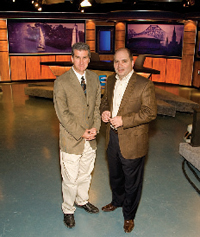 For PBS station WLAE, Hurricane Katrina strengthened its mission to serve viewers as an educational and informational source and helped attract new partnerships that speak to the quality of local programming the station delivers.

“More than ever before, we saw ourselves as a pipeline to the public to understand what was going on in the New Orleans we now find ourselves in,” says Jim Dotson, vice president and general manager of LAE Productions, which is the production component of WLAE-TV. “People wanted someone to help address ‘Where am I going to shop? Where am I going to go to send my kids to school? Is it safe?’”
Immediately after the storm, the staff at Channel 32, pitched in to get a new program, A Greater New Orleans: Road to Recovery, on the air. The format, an hour-long daily show featuring interviews with host Tom Bagwill, allowed viewers access to in-depth information about the state of New Orleans and the recovery. Greater New Orleans also gave agencies such as the American Red Cross, Army Corps of Engineers and a multitude of public and private organizations a vehicle to reach their constituencies and tell their stories in the post-Katrina landscape.
The focus on recovery also brought many viewers and sponsors to WLAE who weren’t familiar with the station prior to the storm.

BEST FOOT FORWARD
WLAE, which has traveled its own difficult path to recovery, is now focused on the future of both the region and the industry. After 18 months of being carried solely through Cox and Charter cable systems, WLAE came back full-strength last February and launched high-definition (HD) in January 2008.

“Since we launched the new set, the feedback has been incredible,” Yager says.
The change also was refreshing for the staff of 22, which was glad to turn the page to the next chapter of WLAE and the recovery.

Today, WLAE has multistream channels: WLAE, broadcast in HD; V-me, an all-Spanish channel whose name translates to “See Me,” launched in September 2007; and Create, which premiered in January and features cooking shows, travel and This Old House for the large do-it-yourself market.

Along with a rejuvenated set and new programs, the station also upgraded to a new high-definition master control system and installed robotic cameras that employ the latest in digital technology and allow one person to control three different cameras.

And more local projects are on the horizon. Postproduction has begun for a one-hour concert and documentary on Fats Domino, featuring high-definition footage of his May 10, 2007, performance at Tipitina’s, with interviews from artists Robert Plant, Dr. John, Randy Newman and Allan Toussaint.

The program will be distributed nationally on PBS this fall and would be the first in a series of programs WLAE hopes to produce in partnership with Tipitina’s.
“Music is one of the most important attributes of New Orleans,” says Yager. “We see this show as a tremendous vehicle to spread the message that New Orleans is on the move.”

The company is also excited about the mandatory conversion of all television stations from analog to digital next February. The switch will mean that the station’s own analog transmitter will be converted to digital for a much stronger reach, extending to viewers in Mississippi and Hammond.

WLAE continues to look for a new location. A proposal to move the studio and museum space to City Park was rejected, but Yager and Dotson aren’t deterred.
“We are what we are on the dial, that’s our presence,” Dotson said. “We are full-steam ahead to be a part of this community, to be a voice for the community.”