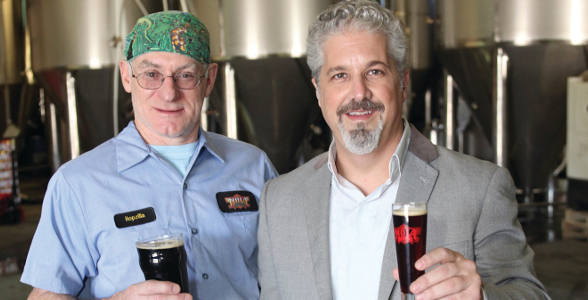 Kirk Coco never thought he would own a brewery. “My mom wanted me to be a lawyer, but I hated it.” After earning his bachelor’s and law degrees from Louisiana State University and his MBA from the University of New Orleans, Coco decided to join the military. At the age of 28, he joined the Navy and enjoyed an 11-year career as a surface warfare officer. “I was lucky enough to travel the world; Asia, Australia, Spain, Italy,” he recalled. “It made me realize how unique New Orleans really is.”

Like many native New Orleanians living away from home, Coco returned after the levee failures in 2005 to help the city start anew. He also knew that no matter how many times he moved away, he would always come back home. He believes that “when you are born here, you’ll live here for life.” Coco’s investment in the future of New Orleans took the form of a brewery because he was upset that Dixie, a long-time New Orleans brewer, gave in under the pressures of Katrina and moved operations to Wisconsin.

NOLA Brewing, located in the Irish Channel, has been in operation since 2008. The brewery was founded by Coco and Peter Caddoo, the skilled former brewmaster of Dixie Beer. The dynamic duo has doubled production every year since the brewery’s inception. A slow growth, but that’s exactly the way they want it. “We want our focus to be on quality,” said Coco.

Visit the Tchoupitoulas Street brewery for a free tour; you’ll meet the staff and drink free NOLA beer. Taste their classic stout, NOLA Brown with hints of chocolate, coffee and caramel or sip a seasonal Flambeau Red with seven malts and three different hop varieties. Along with many bars and stores in town (not to mention all over the Gulf Coast), you can find NOLA brews at local events like Hogs for the Cause, their annual Easter Keg Hunt and the upcoming Jazz in the Park, which begins May 30 in Armstrong Park.