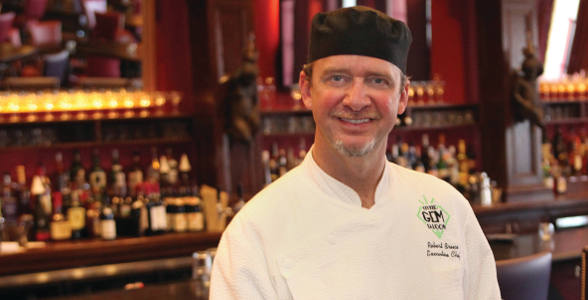 Locally born and raised, Robert Bruce started his career in the kitchen at the tender age of 15, washing dishes at Andrew Martin’s Cuisine. In his high school years, Bruce was fortunate enough to spend three summers under the wing of Roland Huet, an “old-school French chef who barely spoke any English.” Huet taught Bruce the basics, along with his grandmother, who regaled him with smothered pork chops and mustard greens and taught him to “cook from the heart” and “clean as you go.”

After graduating from Wales University with an Associate’s degree in culinary arts, Bruce went on to Florida International University where he earned a Bachelor’s in hotel restaurant management. Bruce has worked in kitchens all over New Orleans, including Upperline, Maylie’s Restaurant, Commander’s Palace, Ruth’s Chris and Emeril’s. Although he’s also been at the helm of several other local eateries like Smith & Wollensky, Palace Cafe and the Westbank’s Fountain Park Centre, Bruce enjoys the freedom he’s found in opening The Little Gem Saloon.

“I like to teach people how to cook,” Bruce explained. “I have high expectations of my employees and they have high expectations of me.” He believes in starting out simple and gradually creating dishes that are more complicated, challenging his employees step by step. “I’ve been fortunate to be able to hand pick good people [for Little Gem Saloon].” Although managing a restaurant that is also a music venue and a banquet facility can be challenging at times, he has been excited about the future of this Rampart Street location since he worked across the street at the now closed Smith & Wollensky Restaurant. “I kept my eye on that space during its construction and was excited about its future.”

The Little Gem Saloon’s latest, most popular feature is their Live Jazz Brunch, which includes a three-piece jazz band, valet parking and all-you-can-drink mimosas for only $35. During the week, enjoy lunch or dinner, and be sure to round out your meal with a performance from local musicians like Meschiya Lake & the Little Big Horns, Delfeayo Marsalis or Kermit Ruffins & the BBQ Swingers.