Next up in Broadway at NOCCA, on April 6, is Megan Mullally, best known for her Emmy-winning turn in “Will and Grace,” but also an accomplished singer and stage performer. 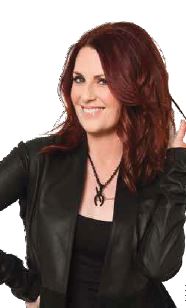 When she appeared on Broadway in 1994 in “Grease,” she met Seth Rudetsky, who will interview her and accompany her on piano at the concert. The pair has performed together frequently, including five concerts in Australia earlier this year. Recently, Megan Mullally e-chatted with me about her upcoming show.

BH: How do you select your projects? What appeals to you about performing on stage?

MM: I try to work on good projects with nice people who are good at their jobs. It doesn’t always work out that way, but for the most part I’ve been pretty darn lucky.

I love stage because it’s such an honor to have that give and take with an audience. Right now I’m loving the concerts with Seth Rudetsky. We perform great, challenging and sometimes funny material, but between songs we sit down and tell stories and laugh and say naughty things. It’s a great format because the audience gets to hear good music, but also gets to be part of a totally unrehearsed and often hilarious kind of “inside” conversation.

I’m also loving performing in my band, Nancy and Beth. It’s so alive and celebratory. I love the songs, the choreography and the rapport I have with my band mate, Stephanie Hunt.

BH: You’ve known and collaborated with Seth Rudetsky for a long time. What is it like working with him on shows like this?

MM: Seth is one of the funniest, smartest, quickest guys around, and in addition to being a fantastic musician, he’s also a great interviewer. We have history, so things can fork off into unexpected directions, which is something that audiences seem not to hate.

BH: How do you feel being part of the inaugural (and hopefully not the last) season of Broadway at NOCCA?

MM: I love New Orleans. My husband [Nick Offerman of “Parks and Recreation”] and I were there last year and had an incredible visit. I’m looking forward to getting back and especially to performing for what I imagine will be terrific audiences who are ready to get a good earful. I hope Broadway at NOCCA is a huge success—why wouldn’t it be?!

145
previous March Arts: Two Performances Not to Be Missed
next Subverting the Status Quo