The image—black women, mostly prostitutes, dressed as baby dolls, dancing and singing bawdy songs in segregated New Orleans—at first seems to be one of self-denigration. 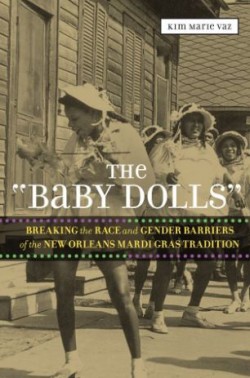 However, in “The Baby Dolls: Breaking the Race and Gender Barriers of the New Orleans Mardi Gras Tradition” (Louisiana State University Press), Kim Marie Vaz, Associate Dean of Xavier University’s College of Arts and Sciences, persuasively argues that the Baby Dolls, including the Million Dollar Baby Dolls from Black Storyville, subverted the status quo, asserted the right of black women to be part of the party and in so doing, inspired future generations of black women in New Orleans to assert themselves.

In 1897, “Black Storyville” and “White Storyville” were created by city ordinance. The rules in both areas were looser than in the rest of the city, with gambling and prostitution allowed. As elsewhere, the women of Black Storyville were victims of racism and sexism. The jobs they could acquire were mainly limited to servants and laundresses. Many became prostitutes.

The only presence blacks held in Mardi Gras was as servants; in response, they formed their own social clubs. Beatrice Hill and Leola Tate of Black Storyville created the Million Dollar Baby Dolls in 1912. Through song and dance, the women showed their strength while mocking the men who oppressed them, gaining and giving confidence to the women of their neighborhoods and having fun. The influence of the original maskers was profound, as shown by moving quotes from more recent Baby Dolls.

Vaz examines the Baby Dolls’ impact on gender, racial roles, dance and jazz through lenses of music, dance and society’s sexualization of the baby doll image throughout this era, among other things. Unfortunately, she acknowledges, there is a dearth of firsthand accounts and original research about the early years. As a result, some comments are speculative and some chapters less persuasive than others.

Vaz is a fine writer, and her book is straightforward and engaging. It works well as a series of academic essays that reveal a lesser-known, quirky and important part of our city’s cultural history and influence.