Something to Crow About

As a cancer survivor and new mom, this Grammy winner has plenty to share with her fans. 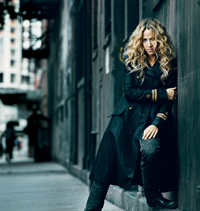 Sensational singer-songwriter Sheryl Crow has shared an extremely deep bond with New Orleans since she recorded her second album here, 1996’s Sheryl Crow, which went triple-platinum, won a Grammy for best rock album and also garnered a Grammy for best female rock performance for the song “If It Makes You Happy.” And like all close relationships that eventually get put to the test, Crow has proven herself a true friend to New Orleans by standing by the city during hard times. After Hurricane Katrina’s ravages, the multiplatinum artist penned “Love Is Free”—a spirited, bright tune that pays homage to the Crescent City and its people—for her most recent and highly acclaimed album Detours.

On Friday, April 25, the nine-time Grammy winner will make her long-awaited Jazz Fest debut. Undoubtedly, the audience will be wowed by her stellar live show, which will surely include her hits along with gems from Detours, which showcases a remarkable fierceness and frankness in Crow’s songwriting. While Crow tackles controversial subjects such as environmental disaster and the war in Iraq on her new record, she also explores and embraces her own life with songs reflecting the personal vulnerabilities of a dissolved high-profile romance with Lance Armstrong, being diagnosed with breast cancer and becoming a new mother to adopted son Wyatt. The result? Crow will probably need to make space for more Grammys next year at her new farm outside Nashville!

Hi, Sheryl! New Orleans is thrilled you’ll be at Jazz Fest this year to rock our world! Is this your first time playing Jazz Fest?
Yes, I’ve never been before because of my schedule, and we’re super excited about it! New Orleans is comprised of the most soulful people in the nation, so it’s wonderful to be a part of the incredible tradition of Jazz Fest. I loved making my second record in New Orleans. I feel an affinity for the city and its people. I’ve been to New Orleans a few times since Katrina, and I just shot the video for “Love Is Free” down there.

That’s right! “Love Is Free” is such a lively song from your new album, Detours. As a New Orleanian, the song caught my ear and the video caught my eye, with the “Make Levees Not War” sign floating down the bayou and all the folks dancing. How did this song come about for you?
The music came first, then I was writing lyrics for it and it occurred to me, Oh wait a minute! This song is about New Orleans and everything that’s happened to its people, as far as all the money that should have come their way, and how mishandled everything was. To juxtapose that with the incredible stoicism and soulfulness of the people of New Orleans made for an interesting lyric idea.

What’s brilliant is that the song and video capture the innate and indestructible resilience, optimism and general craziness of us New Orleanians amid our hardship. It’s evident you really “get” New Orleans.
I’ve told lots of people this, and I always laugh about it: When we worked on the Sheryl Crow record at Kingsway Studios, it seemed like on any given day there was a parade going through the Quarter. And that always struck me. I thought it was incredible that if there’s a topic people want to bring attention to, they’ll have a parade. Or if they want to celebrate there will be a parade. I love that, because there is a great emotional commitment to showing up, congregating and marching. When Katrina happened I kept thinking about the incredible history the people of New Orleans have, and I still feel a great connection to that time, the area we worked in and to the people there.

What brought you to New Orleans to record your second album, Sheryl Crow?
I’d say it was kind of random, but I do think the city pulls people in who are meant to be there, and they leave heavily impacted. New Orleans always amazes me because I feel there’s such a strong karmic pull there. I was looking for a place to record that was going to open my heart and affect me and be part of the personality of the music, and there’s no better place than New Orleans to do that. Everywhere you go, you’re inspired by something, like a guy on the street playing music or just that incredible amalgam of people from all different walks of life coexisting together. I think it’s an incredible little snapshot of what America is meant to be like; it welcomes everyone, no matter who or how you are. New Orleans is a place you can live the kind of life you want to live.

While others may think New Orleans isn’t worth the effort, it’s awesome to have an artist of your caliber supporting us and celebrating our lives through your music.
Oh, that’s really nice, Christine! It’s just incredible that people are still committed to keeping attention dedicated to the city, like Brad Pitt. It’s one thing for celebrities to go out and do things, but this guy is actually making things happen and getting people to be involved in not letting the city wane, particularly the Ninth Ward. The people of New Orleans are powerful in pulling others towards them that have a kindred dedication to help. You guys are spiritual people, and you bring people to you that are of like minds. When we visited the Ninth Ward, what struck me were all these young people volunteering to work and build houses for Habitat for Humanity.

Let’s detour a bit: Critics are hailing your latest album as a classic. It’s even been dubbed your magnum opus. You must be very proud of this album!
I am proud. I know in my heart I made the best record I could make, and there’s nothing on it that I don’t feel fully committed to. Every single thing on it is something I felt very urgent about and very fearless writing about.

“Detours” is a small word, but it seems to say so much about your personal life. You had a lot going on before this album, particularly your breakup with Lance Armstrong, your bout with breast cancer and the fact that you’ve become a mom. All this must have fueled your writing for this project.
It did. The experience of coming out of all that not only fueled the record, but it really informed the record, and definitely having a newborn created a sense of urgency in me to write about things that really resonate with me as truth. My experience of going through a relationship ending, whether it be public or not public, and then being diagnosed, was that I really needed to go through the entire
experience and mourn those feelings, you know, grieve, be angry, be fearful and be joyful and hold the emotion so that when I was done with it I could be done with it, as opposed to pushing it down or making myself distracted and then carrying all that with me for the rest of my life. That’s what we Westerners have learned to do instead of sitting, being quiet and experiencing our inward life. We make ourselves busy and don’t experience our emotions. Emotions are really the gateway to awakening, so for me it was becoming awake for the first time. So the writing process was actually a retelling of all my experiences to myself.

Besides being very personal on this album, you’re also pretty tenacious about global issues that concern you, like in the songs “Shine Over Babylon” and “Gasoline.”
I feel we’re in a moment now in our history where it’s time to be fearless, truthful and to look at the truth, and to be emotionally invested in what’s happening around us. I think we’ve gotten so far away from it that for me not to write about all those things would be denying myself, really. I think that where we are in this moment of history is where we brought ourselves to be; reality TV, computers, BlackBerrys and 24-hour news networks with people just babbling on have served to dull us out and distract us from what’s really going on, and that’s been an incredible opportunity for the government to manipulate us. It’s time we wake up and start demanding answers. I’m one of those people in this country that can’t believe this administration has been allowed to do what they’ve done. We’re at a precipice of things changing in such a way that we won’t be able to reverse it, like the environment. We’ve got a small window of opportunity for change, and we need to embrace it.

You ready to hit the road and tour this summer?
I’m really ready and excited, because I feel like this record has created a platform to communicate. I guess when you come on this planet, your drive is to communicate, be heard, be understood and to make a connection, and this album is based on that.

We’ll be celebrating Earth Day this month. You care deeply for this earth and promoting green issues. Does having a son make you even more concerned about environmental issues?
Absolutely! Having a little one makes everything seem much more personal. Once you have a little child, you realize, wait a second, a third of all species are going to be gone in his lifetime? It becomes a personal affront, almost like an insult that this is going to be the result he’ll experience because of our selfishness.

What have you learned about life since you’ve become a mother, and how will you spend Mother’s Day with Wyatt?
Hopefully I’ll get to spend Mother’s Day with my mother; my son loves his gram and pops so much! That would be really fun, and perhaps my sisters and sister-in-law could get together with us too. Just like everybody else, I’ve learned about that incredible depth of love that you can feel as a mother. You think you’ve experienced the deepest emotions that one can ever experience, then you have a child and it’s a whole different ball game.

It’s wonderful to hear the cancer is in remission, and you’ve got a clean bill of health. Isn’t it remarkable what can be done these days for cancer treatment!
Absolutely! Twenty-five years ago, the breast would’ve been taken. Now lumpectomies are done, and the options are much better. Until we have the cure, the strongest thing is prevention, and that’s early detection, knowing your family history and being diligent about getting mammograms, and that’s what saved me. I’ve sort of become a poster child for that. It’s humbling. I was healthy before I was diagnosed, so it just goes to show how little control you have over the events of your life.

Sheryl, you were gorgeous when you made your entrance onto the music scene 15 years ago, but now it’s like you’ve evolved into this even more gorgeous woman. You are one hot babe! You’ve got to share your secrets for looking so darn good!
Oh, my gosh, thank you! Heavens to Betsy, thank you! My secret is just to embrace all the changes and celebrate them. Like every other woman in her 40s, I’m not loving seeing all the lines appear. Part of my message to the universe is that I love myself enough to embrace the changes, and I think there’s a lot of joy and grace in that, and joy and grace definitely will inform how your face and body respond. Rather than going and getting all the stuff you can do, for me it’s a celebration not to do that.