Most people have never participated in a real-life auction (eBay doesn’t count), so common impressions of what an auction must be like naturally come from movies and TV shows. 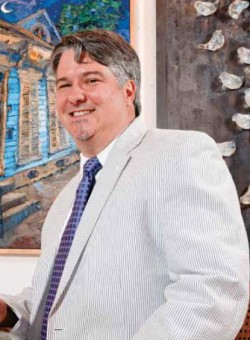 “Well, what they show in the movies is actually pretty close to what really goes on,” said Ashton Thomas, president of New Orleans Auction Galleries. “You have the auctioneer with a gavel, buyers holding up their paddles and things getting exciting whenever a bidding contest gets underway.”

Founded in 1991, New Orleans Auction Galleries is a major regional auction house located at the corner of Magazine and Julia Streets in the downtown Arts District. It houses plenty of paintings like the other galleries on the block, but its sprawling, second-floor space is also filled with furniture, silverware, porcelain, Coromandel screens, lighting fixtures and lots more. Most items carry an antique aura, but as Thomas said, “There’s something to fit every style here—even contemporary. If you don’t like a painting, you’re certain to find a piece of estate jewelry you’d like.”

Around every two months, the auction house holds a sale of roughly 1,500 items (or “lots,” which may be a set of items). Each sale lasts two or three days, and everything is sold on consignment, with the auction house earning a commission on each lot sold. In many cases, the consigners are the heirs of someone who has recently died.

“An auction is a way of bringing stuff to market that allows sellers to get better prices than they could at an estate sale,” Thomas said. “We don’t just get items from the South, but from all over the country. People like to sell through us because a particular piece might appeal to our specific audience, or sometimes they want to tap into the mystique of New Orleans.”

Bidders come from all over as well, and thanks to the Internet, participants need not even be in town while the auction is going on. All auctions are streamed online, and an employee in the back of the auction room holds up “Paddle 1000” whenever a bid arrives on the house computer screen.

The Internet has been a double-edged sword for the auction business, according to Thomas. On the plus side, it has broadened the reach of consigners, buyers and the business in general. On the other hand, the ability for buyers to do extensive research on an item and the ease of finding it through various vendors has exerted downward pressure on prices. That’s one reason New Orleans Auction House is always looking to attract and sell items that are unique or hard to find, according to Thomas.

The reserve on many items start at $100 or so but of course can go much higher. The house’s biggest single sale since its founding was a Philadelphia highboy (an ornate chest-of-drawers) which went for $731,000. Under Thomas’ tenure, the record sale was a Rodrigue blue dog painting that went for $98,400 to benefit the George Rodrigue Foundation for the Arts.

Thomas started in June 2012 and is entirely new to the auction business. “I never thought my career would take me here,” he said. “I enjoy art, but I don’t have a background in it. Luckily, I inherited a capable staff of consigner agents who are specialists in paintings, silver, furniture or whatever their fields might be.”

Thomas grew up in New Orleans, studied math in college in Dallas, and then worked as a bartender at the House of Blues. Later, he took a course in computers and joined the IT department of Brooke Staffing, a regional temp agency. Over the years, he took on more and more duties at Brooke and eventually rose to the position of president. The owner of Brooke Staffing, who was also an investor in New Orleans Auction Galleries, offered him his current position. Thomas’ technical and administrative talents prepared him for the job.

“Running an auction house entails a massive effort of coordination,” he said. “For our upcoming sale, we have 1,600 lots to track, catalogue and photograph. We plan a party before each sale. The event itself is crunch time, and after it’s over, we have to arrange pick-ups, pay consigners and start all over again. There’s no slow period.”

Since joining the firm, Thomas has redone the phone system, changed how photos are stored and updated the computers. As his process of modernizing the auction house continues, he is continually exposed to thousands of fascinating pieces.

“I have a collector’s eye, and something always catches my attention,” he said. “But I haven’t bought anything yet. I’m trying not to.”

789
previous Meet + Greet : Kirk Coco
next Dance Your Way to a Fitter Physique