Patron Saint gives all to his teams and his city 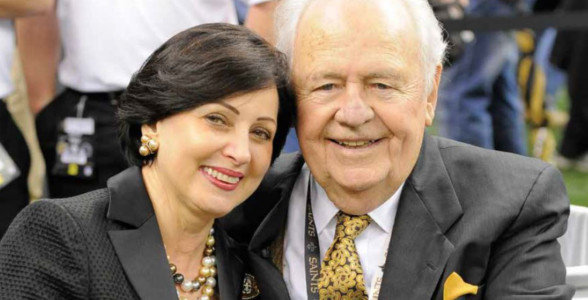 Tom Benson, as the owner of the Saints, would naturally care for the city his team calls home, but his roots actually run quite deep in New Orleans. First, he was born and raised here, specifically in the working-class, racially mixed St. Roch neighborhood just on the other side of St. Claude from the Bywater and Marigny. As a boy, he played pick-up games of football in St. Roch Park and delivered “The Times-Picayune” for pocket change. Now, in addition to owning the city’s football team, he owns its basketball team and many general business interests.

“It’s important to me to support my hometown and the entire region by investing in the community,” he said. “The future of the area’s economy depends on the major businesses and employers in the Gulf South being locally owned. Distant owners simply aren’t inclined to care about the region like we do.”

This reasoning had a role in his 2008 decision to purchase WVUE, the local FOX 8 affiliate, making it the only television station in the New Orleans market that is wholly locally owned. Benson noted that most TV stations throughout the country are owned by national media conglomerates.

His desire to be involved in his hometown also played a part in his decision in 2009 to purchase the Dominion Tower, which had been abandoned since Katrina, and rename it the Benson Tower. He also purchased the adjacent New Orleans Centre and began developing the public space known as Champions Square.

“I didn’t like seeing so much blight next to the Superdome. The area is such a vital part of the city,” he said.

To be sure, this drive to keep his hometown vibrant is what motivated his original purchase of the Saints in 1985. At the time, Benson was a busy businessman, too busy to devote much time to even being a Saints fan, but he didn’t want the city to lose the franchise.

The Saints hadn’t been doing well, and the talk about town was that the team would probably move to Jacksonville. But Benson’s purchase put the team firmly in local hands and dispelled constant rumors that its New Orleans days were numbered. Now the Saints could focus on winning. Just two years later, they made it to their first playoff game. It was the first positive step in the long journey to the 2010 Super Bowl victory.

The story echoes Benson’s recent purchase of the city’s basketball team. The NBA had taken over the Hornets from its founder but needed to find a permanent owner. The team’s future was uncertain. Benson’s 2012 purchase gave the team and its fans stability so it can now focus on winning.

“The name Hornets came from Charlotte and didn’t fit our region,” said Benson. “We renamed the team the Pelicans to represent our culture and our resolve. It also calls attention to the need for coastal restoration and wildlife conservation.”

Investment isn’t the only way Benson is involved with local sports, however. He was a major donor to Tulane’s new football stadium, now under construction.

“When Tulane gets their own stadium, they’ll put 30,000 people in it,” he said. “It’s going to give Tulane football life again. It’s going to become the ball club they want it to be.

“Tulane and Loyola are very important to New Orleans,” Benson continued. “Between them they have about 15,000 students, and the majority are from out of town. They spread the word back home about what a great community this is.”

Benson himself enrolled in Loyola in 1944 to study business and accounting, but he soon left the university to enlist in the Navy for World War II. When he returned to New Orleans, he got a job as a bookkeeper at a Chevy dealership. From there, his career blossomed, and he honed his business acumen and built a portfolio that consisted of auto dealerships and banks.

Benson received an honorary degree from Loyola in 1987 and maintains a philanthropic involvement in the university. Just earlier this year, the Gayle and Tom Benson Charitable Foundation pledged $5 million in undergraduate scholarships.

The Gayle of the foundation’s name, naturally, is Benson’s wife, and much of his philanthropic endeavors of late have had her involvement. Their relationship, in fact, had its roots in a charitable cause. They met in 2004 when she was raising funds to repair the roof of the St. Louis Cathedral. She wasn’t a sports fan and didn’t really know who Tom Benson was. She soon got up to speed on both counts. They married that same year.

Their shared commitment to Catholicism has translated into many charitable donations to Catholic organizations and facilities. Last year, the Pope himself awarded them the highest Papal award granted to a lay person for outstanding service to the Church. But their donations, of course, span many different causes. As another example, they donated $5 million to the Gayle and Tom Benson Cancer Center at Ochsner.

In the meantime, Benson keeps busy attending games and keeping on top of his diverse business interests. “A lot of my friends are looking forward to retiring so they can play more golf and do this, that and the other,” he said. “My enjoyment is coming to the office every day. The challenge of business really keeps me active and young. It’s not work to me.”