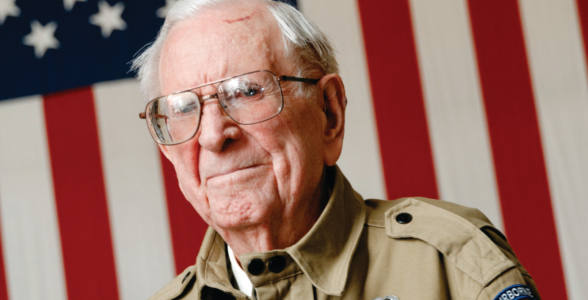 “I fell in love with the girl, and I’m still in love to this day.” The “girl” Tom Blakey mentioned with a smile was New Orleans, the city he’s called home since returning from Europe when the Second World War ended.

The spirited veteran has many accomplishments under his belt: as a WWII paratrooper, he was one of the first to land in enemy-occupied France on June 6, 1944, otherwise known as D-Day; in 2007, the French government bestowed him with the Legion of Honor, the country’s highest honor for foreigners and by the end of 2013, he will be able to boast a remarkable 14,000 hours of volunteer work at the National World War II Museum. Not bad for a 92-year-old.

An article in a 1941 issue of “Life” was what made Blakey decide to become a paratrooper. “I read that paratroopers were the best and the brightest of the army,” he recalled. But when the soldiers of the 82nd Airborne Division leapt from their planes, no training could prepare them for the obstacles they met. “We were being shot at before we even got out of the plane,” said Blakey. Some landed in trees. Some landed in water and drowned under the burden of their 135-pound packs. “Once I touched down,” said Blakey, “it was two hours before I found another American soldier.”

The objective of that first mission was to capture and hold the La Fiere Bridge, which was the only bridge to Normandy’s beaches that was structurally strong enough to allow tanks to cross. By securing the bridge, Blakey and his fellow soldiers ensured that the Germans could not assemble tanks behind the Omaha and Utah Beaches. “We were told to take the bridge as quickly as possible and hold it until we were relieved.” Relief didn’t come for four long days; meanwhile, Blakey and the other soldiers charged with guarding the bridge were under attack for the entirety of those four days, but they held strong. Without a doubt, if Blakey’s mission had not been successful, the story of D-Day would be much different from the one we honor today.

Blakey went on to fight in other famous battles, including Holland Market Garden and the Battle of the Bulge. He was in combat in Europe for just over two years, and found himself in Paris when the war finally came to an end. When asked what that was like, Blakey’s mischievous smile reappeared as he replied: “The champagne flowed freely and everybody was extremely happy.”