When New Orleanians look eastward beyond the Mississippi border to Biloxi, they’ll discover a place intertwined with their past, present and future, extending all the way back to the founding of the two cities. The Sieurs d’Iberville and de Bienville— names that any resident will immediate recognize in two French Quarter streets—were instrumental in the founding of Biloxi and then New Orleans as capitals of French Louisiana. Biloxi even hosts a longstanding traditional Mardi Gras, which proves that we’re cut from the same cultural cloth.

Benefiting from peaceful, sandy beaches and refreshing Gulf breezes that can’t reach our city, Biloxi has lured vacationing New Orleanians for centuries now, and the wealthy built grand summer residences there. More recently, with the legalization of gambling in the early 1990s, the city began its transformation into a Las Vegas of the Deep South. Like New Orleans, Biloxi suffered extensive damage from Hurricane Katrina, and the city is in the process of its own recovery. Condos and hotels are sprouting up quickly. Damaged casinos are back in operation, while new ones are breaking ground. If you haven’t been to Biloxi in a while (or have never been), it’s high time for a visit. Our cousin, located just an hour and a half down I-10, is on the verge of a breakthrough. 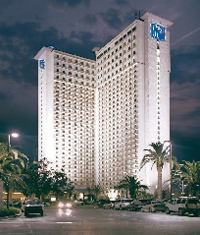 How many casinos can a relatively small town like Biloxi support? Apparently quite a few, because developers keep flocking there to build more. Demand is high; the buzz around the city as an upand- coming resort destination keeps growing. Biloxi and adjacent towns were home to a dozen casinos when Katrina hit and immediately shut everything down. Some casinos were to disappear forever, but others quickly got back on their feet. In order to make recovery easier, the local government scrapped the rule that all gambling must happen offshore (in practice, meaning permanently docked boats), and now casinos can operate on land within a certain close distance from the water. Some refitted the existing meeting spaces of their hotels, while another strategy has been to build a pier where the boat had been docked.

The IP Casino Resort Spa, having incurred less damage than others, led the pack as the first of the bunch to begin operating post-Katrina. It also used the reconstruction period as an opportunity to fasttrack planned improvements and to rebrand itself, scrapping the former Imperial Palace name.

The IP was soon followed by the Beau Rivage Resort & Casino, which, having spent $550 million on repairs and improvements, reopened exactly one year after the hurricane. Many consider Beau Rivage the crown jewel of Biloxi. A readers poll by Travel + Leisure magazine named in January the Beau Rivage hotel as one of the best in the world. And in October last year, the same publication listed Beau Rivage’s spa as one of the top 25 hotel spas in the continental U.S. and Canada. Locally, Beau Rivage stays active in Biloxi rebuilding projects as well as in other community causes.

Meanwhile, the Hard Rock Hotel & Casino had been planning to open its doors for the first time in early September of 2005, just days after Katrina ended up making landfall. Overcoming hurricane-related setbacks, it finally opened at the end of June 2007 and includes 318 new hotel rooms. Like Beau Rivage, the Hard Rock does a good job booking national musicians, but with more of a youthful focus on rock music, not surprisingly.

Casino Magic is gone for good, but on the site, Harrah’s is planning a Margaritaville Casino at the cost of more that $700 million; it is scheduled to open spring 2010. Pirate-themed Treasure Bay Casino Resort has been undergoing a series of expansions. In all, Biloxi has 11 open casinos, with many more projects proposed or already under construction.

Revenues from the gaming industry have been pouring in. For 2007, total casino revenues surpassed $1 billion, a threshold that hadn’t even been reached before Katrina. But other aspects of the tourism business besides casinos are coming up as well, and Biloxi is preparing for growth. The airport terminal is being expanded. The city is redeveloping Beach Boulevard as a scenic drive. The regional convention center will complete its current expansion in 2009.

At the same time, new luxury condo developments aimed at regular visitors to Biloxi, called condotels, are growing in popularity. Six are currently open, and three more will open soon, including the South Beach Resort & Spa, which is spearheaded by New Orleans’ own Ray Wooldridge. Other condotel projects are on the drawing boards.

Biloxi tourism has always been strongly based in the regional market, but as the area recovers from Katrina, it’s receiving wider exposure as well. “Many volunteers are still coming down, a lot from the Midwest and from places like Connecticut and Massachusetts as well,” comments Janice Jones, the manager of media relations for Mississippi Gulf Coast Convention & Visitors Bureau. “They’re spending money, eating in restaurants, visiting casinos and seeing other attractions.” When they return home, they tell family and friends about Biloxi and help spread the word of this exciting place on the shores of the Gulf of Mexico.

Beyond Gaming With Biloxi’s casino explosion over the last 15 years or so, one might overlook the attractions that have drawn New Orleanians and others to the region for so long. It’s important to remember the casinos aren’t starting from scratch. They’re building their businesses on the framework of beloved attractions and a hospitality infrastructure that can trace its roots far back into the 1800s. For visitors to Biloxi that aren’t particularly interested in trying their luck at slot machines or poker tables, the new casino-resorts can offer a good value. The big complexes know they stand to earn more revenue from gambling than from hotel rooms, so they price their rooms relatively low to draw in the customers. There are also plenty of lodging options in Biloxi for those seeking something more low-key than a casino hotel and who just want to spend some relaxing time on the beach.

Indeed, the 26-mile-long stretch of white sand is the closest beach of significance to New Orleans and offers a quick getaway from the Big Easy’s heavy summer humidity. It may not have the dramatic surfing waves of Hawaii or California or the exotic appeal of coastlines in Brazil or Bali, but Biloxi’s beach is not without its own Southern charm. The waves are gentle; the water is warm and clear. It’s nothing too flashy or showy. It’s simply a lovely spot for tanning and book reading, for kids to build their sand castles and splash about. If you wish to get far out on the water, chartered excursions will allow you to try your hand at the area’s acclaimed fishing grounds for deepwater fishing.

Biloxi’s stunning coastal golf courses frequently receive high rankings from renowned publications and golfing organizations, and fees are quite reasonable. Local historians cite a New Orleanian architect, Charles Neiman, as building the first golf course in the state of Mississippi (with oyster-shell tee boxes) in 1908, and the Mississippi Gulf Coast has had strong golfing traditions ever since. Tom Fazio’s Fallen Oak and Jack Nicklaus’ Grand Bear, designed for Beau Rivage and Harrah’s respectively, are excellent, as are the region’s many public and semi-private courses.

Regarding Biloxi’s dining landscape, the influx of casinos has raised the diversity and quality of options over the last decade. Every resort seems to carry the typical range, from a casual grill to innovative fine dining, in addition to the all-you-can-eat buffets. Throw in an Asian fusion restaurant, a quality steak house or celebrity-chef outpost from the likes of Emeril Lagasse, Luke Palladino or Todd English. Meanwhile, plenty of soul food, seafood and Southern-style home cooking can be found throughout the area. Serving fine cuisine in a historic home, Mary Mahoney’s is a Biloxi institution revered by locals just as New Orleanians love their Galatoire’s or Commander’s Palace.

A Bright Future As Biloxi’s casino industry grows, city leaders still see the importance of developing attractions for children and for those who want to enjoy Biloxi’s nongambling side. Even casino officials agree.

“People don’t necessarily want to stay in casinos the whole time. For the future of Biloxi, the city needs non-gaming hotels and motels, free-standing restaurants, things to do like mini-golf and water parks,” Jon Lucas, the president and general management of IP Casino Resort Spa, told New Orleans Living. “If that happens as our infrastructure is rebuilt, Biloxi will become a full-blown destination resort.”

Brian Sanderson, president of the Gulf Coast Business Council, believes such a future is indeed coming to Biloxi. “Over the next five years, I believe you will see Biloxi and the entire Mississippi coast become one of the most desirable places to spend your vacation,” he says. “A world-class science and education attraction is being built in Hancock County by the creators of Epcot Center, and the gaming market is poised to become the hottest market behind Las Vegas. Between these attractions, you have a vibrant arts community that is going forward with the Ohr-O’Keefe Museum designed by Frank Gehry. Warm downtown districts that have wonderful restaurants and shopping are expanding.”

It’s clear that Biloxi is growing quickly, and New Orleanians should take note. From the same founding fathers in the 18th century to the same tragedy of the 21st, the stories of Biloxi and New Orleans are linked. Still, Biloxi is different enough that a trip to the Mississippi Gulf Coast is indeed a vacation. In a post-Katrina landscape, the city merits a fresh round of exploration (and keep in mind that residents are seeking tourist dollars to support their recovery like we are). Offering the glamour and high style of casinos and luxury condominiums, as well as the quiet beauty of national parks and sandy beaches, our cousin in Mississippi is due for family reunion.