The Saints’ New Tight End Brings His Best to the City 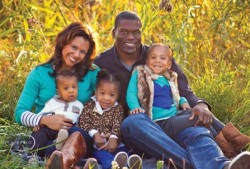 New Orleans embraces the new, the passionate, the committed, the talented and the faithful. In Benjamin Watson, the New Orleans Saints and New Orleans may have found someone who fits all of these prerequisites. In 2013, Watson has potential to emerge as Sean Payton’s newest offensive wrinkle. He is very likely going to get some important targets, especially in the red zone. In Cleveland, he was third in receptions, touchdowns and yards, but in the Saints’ far more potent offense, Payton will find plenty reasons to remind fans and defenses why Watson was a first-round pick for the Pats. Watson is exactly the kind of smart, experienced, classy player the Saints love to feature and his presence on the other side from Jimmy Graham will provide plenty of opportunity. Playing with Drew Brees means that all weapons will be on the table and, at 6’3”, 255 pounds, Watson will eventually pose a very serious on-field threat to opposing teams.

Watson views his coming role as being a good mix of both receiving and blocking. “This is an offense that has a lot of talent, it has accomplished a lot of great things and I will get my chances to make plays and others will get their chances,” he said. “Coach Payton does a great job of using your strengths and putting people in a good position to have a role. He likes to get a lot of people involved.”

At the same time, Watson is patient and realizes that he will have to work his way into the offense. “When you come to a new offense, you have to earn your role and earn respect, and the first part of that is learning what to do. So, for me, it’s all about dissecting the offense—what the tight end does in it and what different calls mean—learning how to erase my memory from the last nine years, reset, start afresh and go forward.” While there is no doubt that it will be a considerable transition from the league’s 25th ranked offense to its second overall, there will still be advantages. “All offenses are different,” said Watson. “But a lot of them have similarities, and the good thing about being in Cleveland (as opposed to New England) and coming here is that the offenses are more similar in terms of the west coast system. Some of the play calls and concepts are similar.” As for the prospect of playing at the same time as Jimmy Graham, he said: “It’s going to be fun seeing how we work off each other and complement each other. I’m excited about that.”

Watson also brings the personal qualities that have become a hallmark of recent Saints teams. Family, faith and social responsibility form a large part of his life. Like Drew Brees, he has been a trusted leader among fellow players as he is now a member of the NFLPA Executive Committee and has also been a delegate and a rep alternate. Having emerged from a whirlwind courtship by the Saints (while out of the country on vacation, no less) and the birth of his fourth child (just a day after signing, he was “born a Saint”) and then immediately plunging into finding a new domicile and learning a new playbook, Watson and his wife, Kirsten, although very pleased with their past homes in Cleveland and New England, found a lot to love in New Orleans. “We wanted to go someplace in the South,” he said. “We’re both University of Georgia graduates and we’re both from the South. We wanted to go somewhere with good food and where family would be close. Kirsten has family in New Orleans and she grew up in Baton Rouge. We wanted to go someplace that had a winning team—a team that had a chance to compete for a championship—and where the fan base was the best, bar none.” Watson appreciates that the Saints were not always winning and yet the fans (including Kirsten’s own uncle) still loved the team. “I know this a very passionate fan base; they showed up when the team was not winning and now it is great for them to show up and have something to be proud of. When New Orleans called us, it was like, ‘Wow, Lord, you answered a lot of prayers.’ Everything checked off. We’re excited to be here.”

In keeping with New Orleans’ own post-deluge renaissance and devotion to civic improvement, the Watsons have personally dedicated their own charitable foundation, One More (watsononemore.org), to improving the lives of those in need. “We were raised to believe that charity is not just about giving money; it’s about giving time, doing for others, passing on blessings and passing on to others what has been done for you,” said Watson. “The purpose is spreading the love and hope of Christ to one more soul, and that’s done by meeting people’s physical needs, by feeding them, by clothing them, by promoting education and also by telling them about the love of Christ. We want to leave a legacy for the NFL and our children, not just to be known as a great player but as a family that reached out to others and showed the love of Christ to others.”

It is difficult to imagine a better addition to the Saints and the city than the Watson family. Benjamin Watson will bring another element of versatility to an already high-powered offense and, together with his wife and family, clearly brings the kind of initiative, dedication and ingenuity that are rapidly becoming the keystones of an ever-improving city.

1.82K
previous For the Love of the Game: The NCAA Women’s Final Four in New Orleans
next Akiem Hicks, Possible Defensive Star of 2013