Never mind flowers (thank you, anyway), but if you must, bring me lavender—and lots of it. As soon as you had pulled out of my driveway, I’d find an old paper sack under the kitchen sink, fill it up and leave it on an unmarked Uptown porch, in hopes that Mary Sonnier might make more of her stunningly lucid lavender syrup, which she regularly drops off at Iris.

It takes a blooming acre of lavender to come up with just 12 pounds of essential oil, which is used to make the syrup, so it’s not cheap, but it’s less gaudy than gold and much lighter to boot. I think of lavender as a gourmet bar’s first-aid kit; an ancient herbalist tells us it is of real service for “giddiness or turning of the brain,” as well as mental depression and delusions—all of which I see at Iris daily. I’ve administered a few drops of Mary’s syrup to many a forehead that was desperate for attention.

Not that plums are in their prime right now, but like an anxious parent bent on hustling a rushed marriage, I drove in blind haste with both hands on the wheel to the nearest Rouse’s and burst through the automatic doors into the produce section, an amateur fruit-whisperer’s field of dreams. I’m happy to relate that Chilean plums ain’t half bad. I took out their stones and dropped them in a juicer with their skins on, so as not to lose any tartness, then pushed the nectar through a fine mesh strainer. The plum wine, frankly, is in the recipe below as a kind of insurance for consistent flavor, since not all plums are created equally: At least it’s cheap and once open, keeps well. First, I made the drink only with vodka, and that one went down just fine. But I grew irritated at how cozy the lavender and plum seemed to be getting in the glass. Tanqueray, with its sweet nose and distinct juniper, got ’em on to the dance floor. 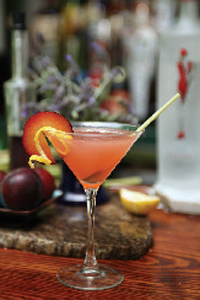 Combine all ingredients in mixing glass, shake well with hard ice and strain into a martini glass. Garnish with a slice of plum and a lemon twist.

205
previous Sensible Feasting
next It’s not the sexiest diet plan, but logging what you eat can keep you on track