A Home Built for Two 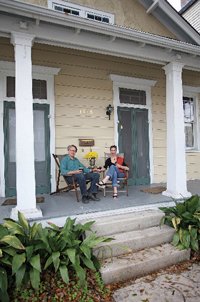 In 2004, when Tom and Susan Sully began looking for a second home, they knew they wanted to immerse themselves in the local culture.

Tom is a painter who specializes in landscapes, figurative painting and portrait miniatures. Yes, he is a direct descendant of famed painter Thomas A. Sully; in fact, he is Thomas A. Sully III. Susan is the author of more than half a dozen books about interior design, including the very popular New Orleans Style. And they go nowhere without their chocolate standard poodle, Jesse. This merry band, having been ensconced in places as exotic as Morocco and as old-line-grand as Charleston, descended on New Orleans to “smell the coffee.”

Like many young couples, part of “smelling the coffee” included falling in love with a wonderful, neglected cottage and working as much on it as on their careers. “When we were looking, we kept hoping we would find something as rich as this,” says Susan as she stands in the living room where the walls and 14-foot ceilings are stripped bare to the heart pine and cypress wood. She touches the New Orleans–made brick chimney that bisects the living room and a bedroom-turned-studio. “When we walked in, Tom fell in love with the integrity of the materials. I fell in love with the handsome detailing—pocket doors, deep cornice moldings—that turned this basic Creole cottage into an elegant home.”

The house is situated on a quiet street in Faubourg St. John, not far from the racetrack and within walking distance of the New Orleans Museum of Art. It was shaded by trees, boasted a large backyard and needed some TLC—more TLC, in fact, than the Sullys bargained for. The entire house needed to be rewired, replumbed and the central air and heat moved to the attic.

“We were told the house was build circa 1850,” says Tom, who gutted the kitchen and bathroom pre-hurricane, spending six months hanging cabinets, tiling counters, creating closets, painting details on the floors and resurfacing a cast-iron clawfoot bathtub. Luckily, the house escaped damage during Hurricane Katrina. “It has withstood a lot. To me it is simple but sturdy, and in many ways it benefited from neglect because no one came in and yuppiefied the place. When we started working on it, we actually wanted to do as little as possible, to keep it as close to its roots but still livable in 2008.”

Two of the four fireplaces were re-dressed antique cypress mantels from the Bank (“New Orleans has the most fabulous architectural salvage places,” says Tom). In the bedroom, Susan pickled the wood to a “limed” effect, then pulled out pots of paint samples to get the right French-gray moldings and walls of chartreuse-turned-absinthe green. The colors set off a treasured Art Deco Chinese carpet. That carpet rolls out from under an antique burled-wood sleigh bed, a gift from Tom’s mother to the couple. A pair of armoires holds collections of hats the two seem to favor. And Tom’s landscape paintings now appear above some of the mantels.

When Tom sets up his easel, taking over a room with the most amount of light, Susan pulls out her sewing machine. “I love sewing; it’s my therapy when I need to get away from the research and writing of my books,” she explains as she grabs a handful of Indian silk used for 12-foot curtains. “I buy fabric everywhere I go … India, Morocco, a flea market,” says Susan, who upholstered two of the walls in the living room with natural-colored linen to bring in light.

“If I had to define our decorating style here, I’d call it Orientalist-Creole,” says Susan who knows her way around decor, from the grand to the humble, as seen in her many books. “I love mixing things from travels. The chandelier and sconces in the dining room are from Morocco. Interesting how the sconces look like the hands of the flambeau carriers during the parades here. The big harvest table in the center of the room is Spanish in style. It’s big so people can sit around it forever. The carpet in the living room is from Africa, the ottoman from—oh, I don’t know— but it looks Turkish, doesn’t it?” It does, indeed. 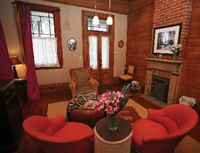 The decor is a treasure trove from some distant caravan, but it is anything but whimsical. The esthetic, like the house, has roots. The house, like the objects, art and treasure within, has a story.

“This house has so much potential,” explains Tom, who along with Susan, works from a large studio in Asheville, North Carolina, part of the year. “The yard, the rooms, the soaring ceilings … oh, this could be a much larger house by adding on rooms. But I love that we have left the original house in as close to original state as possible for modern living. The walls, ceilings, the huge pocket doors with Greek Revival detailing around it untouched, the beautiful wide-plank floors … only the cabinets are from Home Depot. 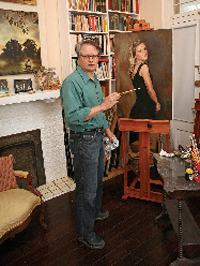 “On balmy summer evenings, Susan and I like to take a long, cool drink out on the front porch and sit and enjoy the parade of neighbors as they pass by. It’s a tiny neighborhood, but it is very much a New Orleans neighborhood,” says Tom, as he watches his wife work from a small, antique pine table, a family heirloom, tucked in a corner of the kitchen area overlooking the backyard. “Now I must get back to work; you know the light here is quiet different than in other cities, and it changes it so quickly …” his voice trails off as he moves toward his studio at the front of the house where portraits of four sisters await.