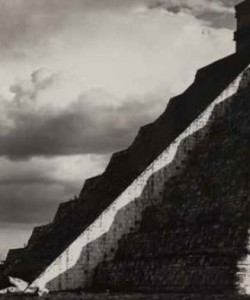 At first, the creation of a tiny new gallery at the palatial New Orleans Museum of Art might not strike you as impressive or important. The as-yet unnamed space, located at the nexus of the second-floor modernism and surrealism galleries, hosts rotating exhibitions of modernist works on paper curated from the museum’s massive permanent collection. Since works on paper are by nature delicate and light-sensitive, the new space offers visitors a chance to engage with the permanent collection outside of private appointments.

Currently, “Shadow and Light,” an exhibit of black-and-white photography mostly dating from 1915 to 1945, occupies the space. The small show explores one of photography’s most basic disciplines: the use of light and shadow to create a compelling picture.

Freeman Family Curator of Photographs Russell Lord, who oversees the new gallery’s exhibitions, explains that the small space is meant to be “conversational.” He points out the subtly playful juxtaposition of a Maurice Tabard nude, vivisected by bars of shadow, and a Picasso nude in the adjacent room. The placement reveals visual similarities between the works, but only to an observer standing in the right spot. On the other side of the gallery, a striking, almost nonobjective photograph by Roger Graetz leads the way to a room of full-canvas abstract expressionist works.

Lord chose the chronological range of “Shadow and Light” for its uneasy position roughly between World Wars I and II. “It’s a little dark, somewhat sinister,” he said, “playing on the ideas of the macabre and the uncanny.” Viewers will find themselves attempting to locate the light source in a photograph or staring into a bottomless shadow. An excellent marriage of light, shadow and the uncanny, Laura Gilpin’s “Stairway” at the Temple of Kukulcán, Chichén Itzá, captures the Mayan pyramid’s now-famous shadow snaking its way down the steps to join with its carved serpent head.

Because of the gallery’s size, Lord admitted he has to “let go of some friends” when curating exhibitions. The end result, however, is a thoughtful selection of works tying together the experience of NOMA’s modern collection.

“Shadow and Light” is on display at the New Orleans Museum of Art, 1 Collins Diboll Circle, until August 4.
Music Spotlight: Naughty Professor

Hailing from all over the U.S., the six young members of New Orleans-based funk band Naughty Professor met as freshmen at Loyola University in fall 2010. Discovering during an informal jam session that their sounds gelled, they decided to run with it, and Naughty Professor was born. The band features John Culbreth on trumpet, Bill Daniel on guitar, Nick Ellman on alto saxophone, Ian Bowman on tenor saxophone, Noah Young on bass and Sam Shahin on drums.

Naughty Professor has been inspired by the success of other contemporary New Orleans bands like Snarky Puppy and Lettuce, who “paved the way for instrumental, original bands like ourselves,” said Ellman and Young. Their music is tight, rhythmic and infectious, successfully showing off members’ technical skill while remaining danceable; the group cites the influence of classic artists ranging from James Brown to Led Zeppelin. Naughty Professor has gained a loyal following in New Orleans and beyond for its high-energy live shows, while opening for big names like Rebirth Brass Band and the Soul Rebels.

The band’s recent album, “Until the Next Time,” came out in April 2013, and is “100% Naughty Professor” from the writing to the recording and production, according to Young and Ellman. They explained: “After spending a lot of time living and playing music together, our sound has naturally evolved. We have a tighter live show and a stronger identity of who we are as a band.”

To promote “Until the Next Time,” Naughty Professor will embark on a three-week tour of Colorado this month, beginning with two shows in New Mexico and moving on to hit seven more cities, including Denver. Catch them back in New Orleans in August.

By now, you’ve probably glimpsed the whimsical spin on “Good Night, Moon” that’s taken over New Orleans bookstores. “Goodnight NOLA,” by Cornell Landry, was inspired by Landry’s younger daughter, Corinne, in the wake of Hurricane Katrina. Landry didn’t want Corrine growing up surrounded by negative feelings about New Orleans. He teamed up with Louis J. Schmitt to create a bedtime book that would send her to sleep thinking of iconic NOLA landmarks, dishes and customs.

Since “Goodnight NOLA,” Landry has written seven more children’s books, including “One Dat, Two Dat, Are You a Who Dat?” and “Happy Mardi Gras,” and is working on a ninth, enjoying commissions from local institutions like the Hotel Monteleone and Touro Hospital. He now works with illustrator Sean Gautreaux, whom he described as an “incredible artist.”

Landry doesn’t charge a fee to give readings, but will happily personalize and autograph his books for purchase. His favorite part of his work? “I get to go to the schools and spend time with the children,” he said. “They are all SO FABULOUS!”
Browse Landry’s books, purchase copies, and learn more about the author at blackpotpublishing.com