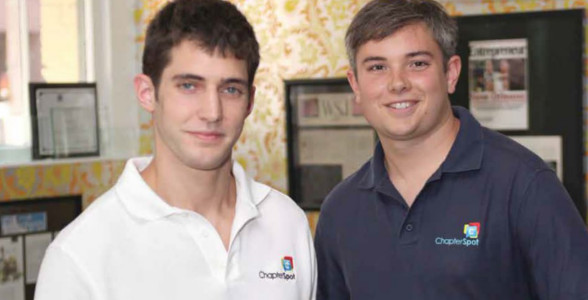 Joe McMenemon and Brendan Finke, Sigma Phi Episilon fraternity brothers at Tulane University, soon recognized a need for a more organized method of communication while working for their chapter. But it wasn’t until they met again, several years later, that the drive to create ChapterSpot.com was born. McMenemon graduated with a degree in finance and had just begun working at Morgan Stanley mere months before the 2008 collapse of the financial sector. Finke was stopping in New York after spending a semester in Europe on a study-abroad program when the two decided to join forces and start their own business.

Although Finke was still in his senior year studying Political Science and Economics at Tulane, the partners delved into their savings and began to build ChapterSpot.com. Aside from attending school here, the duo considered several other benefits to starting their business in New Orleans. First and foremost, it was “where we wanted to be” professed McMenemon. They loved the city, not only for its affordability, but also for its rich culture and laid-back atmosphere. They had also already established connections with a “great network” of people and businesses in the Crescent City, not least of whom were the folks at Idea Village.

In 2009, McMenemon and Finke made their dreams a reality with the official launch of ChapterSpot.com, an online communications resource for greek communities and/or any group or organization that needs services such as a member database to easily send emails and texts notifying members of dues, a platform for payment or for creating and organizing events and even an online marketplace for t-shirts and tickets. ChapterSpot offers the tools needed to manage organizations at both local and national levels, and can design, build and host websites for individual chapters.

It seems that work and play are intricately intertwined for the young partners, especially McMenemon, who believes he’s reached that magical balance where “work and life are aligned” instead of in opposition. They both admit that even while out on the town, enjoying dinner and drinks with family and friends, the conversation almost always turns to ChapterSpot. But before you start thinking they’re a couple of work-a-holics, know they have some downtime; Finke enjoys cooking and McMenemon can’t resist a good run through the streets of the Crescent City.