There’s a new delicious dining destination in the French Quarter 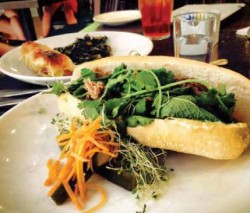 dubbed Kingfish, where folks can taste the creations of the talented, James Beard Award-winning chef, Greg Sonnier. Named after the infamous Louisiana Governor and U.S. Senator Huey P. Long, Kingfish is an “upscale-casual” venue offering dishes like Tempura-Battered Deviled Duck Egg, “Duck a la Saulnier” with ramen noodles and “Junky Chick” Rotisserie. With a distinguished chef like Sonnier in the kitchen, it’s only natural they’d choose an equally honorable bartender, and they struck it rich with Chris McMillian.

Although Vietnamese food could always be found in abundance on the West Bank, there seems to be a recent explosion of these restaurants now in the East, including the recent addition of Ba Chi Canteen on Maple Street. Ba Chi is run by the same folks who own Tan Dinh, but with a focus on slightly different fare. Among the classic favorites like pho, banh mi and vermicelli bowls, you’ll find Spicy Kim Chi French Fries and a huge selection of “Bacos” or their version of Vietnamese tacos. These munch-able mouthfuls feature flavors like Honey Ponzu Shrimp, Bulgogi Beef with Kim Chi and Creamy Spicy Catfish.

Pho Bistreaux is another Vietnamese restaurant that recently flung open its doors to the delight of people living near Oak Street. Located in the building that briefly housed yet another burger joint, deli and Indian cuisine, Pho Bistreaux is the newest addition to one of the fastest-growing corridors in the city. The restaurant sports a sleek, modern look with counter seating, high tables and low-hung track lighting. Enjoy dishes like Grilled Pork or Chicken “Sliders,” pho, vermicelli, egg rolls and spring rolls, or an interesting combination of both. The great response from the surrounding neighborhood is one sign that Pho Bistreaux may enjoy staying power.

Celebrating 17 years, Sun Ray Grill launched a brand new menu, the first of many scheduled enhancements to the restaurant. New menu items include seafood cocktails like Jumbo Lump Crab Meat tossed with house pickled vegetables, a Yucatan Shrimp Cocktail with diced avocado and Hawaiian Poke featuring seared tuna with mango and almonds. Sun Ray Grill has also expanded its already popular fish taco offerings with Wood-Smoked Lemon Fish Tacos and seasonal Grilled Soft Shell Crab and Fried Scallop Tacos. Owner Dana Deutsch said that “Our menu tells the story of my life—what I have seen and tasted in the places I have spent much of my time.”

After several months of uncertainty, fans and neighbors can put away fears that Tujague’s will end up as yet another t-shirt shop in the French Quarter. Owner Mark Latter, who took over the historic restaurant after his father passed away, has finally assured the community by signing a new lease on the building. Open for over a century and a half, Tujague’s will continue to serve Shrimp Remoulade, its house specialty; Beef Brisket with Creole Sauce and classic New Orleans cocktails like Absinthe Frappes and Sazeracs.