Chris Paul has entered the pantheon of roundball greats with perhaps the single most valuable performance over an entire season since Tim Duncan first entered the NBA panorama. 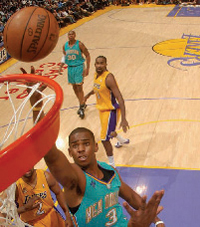 He took an oft-mediocre franchise best known for overly fashionable teal blue striped uniforms to a team record for wins, to a year-long run at the top spot in one of the toughest conference lineups in decades, a division title over the defending league champions-, and a second seed in the playoffs. More than that, he almost single-handedly transformed a franchise that in the beginning of the season could not sell seats in the top half of its stadium, and which midseason threatened to move in the guise of what appeared to be a fairly dubious restructured contract, into a late season surging threat
to the reigning hardcourt hierarchy.

Paul was the first to lead the league in steals and assists since John Stockton in 1992, and the first to finish with more than 20 points per game and 10 assists per game since Tim Hardaway in 1993. Only time will tell if the league will sell out to Los Angeles ad madness again by wrongly handing the 2008 MVP to Kobe Bryant, but here’s hoping that the league will see its way to grant it instead to the one player in the league who has contributed the most to his team, his franchise, and his city by relying on what made the league great in its heydays: pure, fundamental, smart captaincy and leadership.

To have seen a Hornets game this year meant that fans were able to enjoy a command performance of on-court coaching, masterful ball handling, the visible respect of teammates and an awareness of the impending importance of every shot by Paul. The jersey of one Pistol Pete Maravich hangs on the wall of the Arena (and Dome) and it is quite likely that it will be joined by the only basketball player to ever rival his impact in New Orleans. Maravich brought out the love of classic basketball in New Orleans, but Paul revived it.

New Orleans is decidedly unused to championship fever. The lone pro championships involved the minor league Buccaneers (the ABA basketball team that played in the Loyola Field House), the Zephyrs and the Pelicans. No big league team has ever played here and won it all.

The Hornets will face the Dallas Mavericks in the first round and if all goes well, they will play through May, possibly into June (if all goes extremely well). If they beat the Mavs, who hold a dismal road record of 17-24, the Hornets will be rewarded with the right to play the San Antonio Spurs. If they can
overcome that monstrous hurdle, they may next have to overcome the number one seed L.A. Lakers, led by Kobe Bryant who is always a threat to put up 50 points. But keep in mind that through all of this, the Hornets still bested the

Spurs during the regular season and finished but one game behind the Lakers for the Western Conference crown, and in the end Bryant has never won a title without Louisiana’s own Shaquille O’Neal by his side. But no matter what, the margin for error will be small, as the difference between the top team in the Western Conference playoffs and the bottom one is but 7 games (as compared with the Eastern Conference of 29). All teams in the West won more than 60 percent of their games. The Suns bring Steve Nash, and the Nuggets will bring Carmelo Anthony; there is no easy foe. Perhaps the team that Hornets fans fear most is, ironically, the Jazz (to whom the Hornets lost three of four games).

However, the team has built its repertoire of skilled players on more than Chris Paul. David West has been dominating this year from the inside and outside, rebounding almost 9 times per game, averaging more than 20 points per game and landing lightning quick moves and easy shooting touches on poorly matched defenders all year long. Peja Stojakovic finished second in the league in 3-point shots made and fifth in 3-point shooting percentage. West and

Stojakovic appeared to have had the greatest impact on the team’s improved play this year over last year’s. Tyson Chandler, finishing third league wide in rebounds and second in field goal percentage, provided the kind of real, imposing presence in the middle from the center position that any team with aspirations for a title must possess. Along with Morris Peterson’s dependability, versatility and disciplined play, the team has put
together one of the finest starting fives of any team in the league.

The bench has been strong as well, with Jannero Pargo coming in as a backcourt mate to Paul, a combination that seems to lead to a bona fide mass of confusion for opposing defenses; Bonzi Wells who brings playoff experience, scoring and defensive ability and toughness; and the solid platooning of Rasual Butler, Hilton Armstrong, Mike James, Ryan Bowen, and Melvin Ely. Perhaps the man to look out for most prominently, though, is first round draft pick, Julian Wright. Wright – played strong- in the last quarter of the season, piling up minutes, points, big plays, and crowd-awing athletic moments that point to his being a possible key factor in the playoffs and a main cog in next year’s team.

Perhaps the Hornets’ most impressive qualities this year have been their ability to surge at important moments and altogether their vastly improved team chemistry.

Finally, what is also outwardly noticeable is that they have taken on more of the spirit of their hometown. Their incongruous Carolina teal blue has morphed into a more natural Mardi Gras Gold with bands of purple, and that blue sure seems to be taking on positively green qualities as well; their pre-game introductions have become friendlier, more boisterous and less formal, all while their reliance, interaction and chemistry with the home crowds have expanded wildly beyond what it had been in a very short period of time, much like the crowds themselves. The Hornets have certainly, maybe finally, created a real nest for themselves in this city on the river, and if they bring a major league trophy home to their championship-hungry fans, they may find themselves embraced and taken in by its devotion like they may have never imagined.