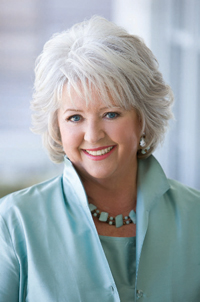 She’s a kind-hearted, effervescent and unpretentious Georgia homemaker, and she just happens to be one of the most popular and beloved celebrity chefs in entertainment today. After living for two decades with agoraphobia brought on by the death of both her parents and a decaying first marriage, Deen took $200 and began making food out of her home for a lunch delivery service called The Bag Lady, with sons Jamie and Bobby helping with deliveries. The business grew and within two years, Deen eventually opened The Lady & Sons, which averages 1,200 visitors per day. After a rainstorm drove a literary agent into the restaurant, a major publishing house realized the potential in Deen’s self-published cookbook and Deen soon found herself on QVC selling The Lady & Sons Savannah Country Cookbook, where the accidental icon’s rise to fame took hold.

Since then, Deen has reigned queen supreme of southern hospitality, using her undeniable charm and brilliant kitchen skills to become a tremendous hit, publishing numerous cookbooks, including Paula Deen Kitchen Classics and Paula Deen Celebrates. She’s also become a darling of the Food Network and a household name thanks to her television shows Paula’s Home Cooking, which debuted in 2002, and Paula’s Party, in 2006. In 2004, she opened Uncle Bubba’s Seafood & Oyster House, another wildly popular Savannah restaurant. In 2005, Deen launched Cooking With Paula Deen, a magazine with an impressive circulation of 1.3 million, and in 2007 she released her frank and endearing memoir, It Ain’t All About the Cookin’. Also in 2007, Deen won two Daytime Emmy Awards and was ranked one of the 100 most powerful celebrities by Forbes magazine. Deen’s indomitable empire will continue to expand this year with even more books, lines of both rugs and cookware and her own buffet at Harrah’s Casino Tunica. No matter what this culinary rock star conjures up, she’ll always bring her love of life, laughter and family to the table. Deen made the time—and what a harried calendar she has!—to talk with New Orleans Living and send the city she loves a big ol’ hug!

Hi, Paula! It’s awesome to meet you! Thanks so much for chatting with me today!
Well, hey Christine! You are just so welcome, honey!

I’m amazed at all the stuff you’re up to these days. You are everywhere! Do you find it hard to keep up with yourself sometimes?
I’m kind of amazed too! [Laughs] Yes, it blows me away! I was just talking to my Aunt Peggy, and apologizing to her because we hadn’t talked in a while, and I told her they move me so quickly that I don’t have time to think! I get on a plane and get shuffled from one place to the other. I’m missing a lot of life because I’m moving so quickly. .

You seem to really love your work—doing cookbooks, having restaurants, publishing your own magazine, taping two shows for television. I mean, you got it goin’ on, girl!
I got it goin’ on, girl! I love my work! I love, love, love my work. You know, I’m so fortunate that my team is fabulous. They’re great; they’re like my family. And we have the best time together! It certainly makes the work not seem so much like work.

Southerners have a way of being quite open about their lives, and you certainly didn’t disappoint in your recent memoir, It Ain’t All About the Cookin’.
Some people thought I was telling too much, but I trusted my gut more than theirs. You can’t help somebody if you’re not truthful. I couldn’t sugar things up. There’s lots of girls and guys out there that have really had some hard knocks, but you can take those hard knocks and you can still come out on top. In order to convey that message, I had to let them know the kinds of hard knocks I’d been through that I had overcome. I knew I was taking a chance, but I’m human and the important thing is when you make a mistake, you learn from it. And that mistake can somehow turn into a blessing. It’s important that everybody knows that if God can forgive you, you can forgive yourself and move on.

True. And you’ve become a huge inspiration to people. You must hear plenty of touching stories about how you’ve affected the lives of others.
I do! In fact, a girl came up to me in New Orleans recently, looked me in the eye and said “Paula, it was like reading my own life story. I went through everything you went through, and thank you for sharing that with us.” I know that some people might have been offended, but you know, I can’t worry about those three or four people.

What other exciting writing projects do you have brewing right now?
My goodness, I’ve got a lot on the table right now! The book I’m most excited about is my children’s cookbook, Paula Deen’s My First Cookbook! I have so many little fans out there that love my show. And with me having a grandson now, it’s important that I gear myself to the little ones.

Oh, you must absolutely love being a grandmother to Jack, and I’m sure you don’t spoil him at all!
Oh, honey! Listen, when he sees me, he starts looking for what I brought him ’cause he knows I’m not coming to his house empty-handed! I absolutely love being a grandmother! The only thing I don’t love is that I don’t have time to be that typical grandmother, but I make the most of the time I have. Oh, and another book I’m getting ready to kick off is a style book with Brandon Branch—he’s one of my personal assistants; he’s the creative director of my magazine, and he does set design on my shows. It will have nothing to do with cooking, and you’ll see how embedded we are in Savannah style.

The Paula Deen Buffet at Harrah’s Casino in Tunica, Mississippi, will be opening soon. That is awesome!
And that is probably the biggest and most exciting thing of the year for me! We’re talking about other locations, too, and I told them, “Now listen, I think this is the perfect marriage, and I want to have lots of children with y’all!” And oh, gosh! We’ve got a bread station where the cheese biscuits and the hoecakes will be cooked. We’ve got a little kiosk that will be named Uncle Bubba’s Oyster’s House after the seafood restaurant my brother and I have in Savannah. Oh, my gosh, it’s so good! That’ll be where you get all your seafood like your char-grilled oysters and fried shrimp. Then there’s Michael’s Smokehouse where you get B-B-Q and brisket and everything….

Okay, the Zone Bar I ate for breakfast just wore off!
Well, hey, I ain’t had breakfast yet! And then we’ll have the Lady & Sons station, where you’ll have the fried chicken, the collard greens, the macaroni and cheese, the butter beans, the black-eyed peas … oh gosh! Then you’ll have Little Jack’s Corner, and that will be the dessert station.
Everyone must tell you about their favorite recipe of yours, and I think your recipe for the Krispy Kreme Casserole is most intriguing to me. I could really hurt myself with that one!
Oh, God! Listen, it should come with a warning label: Only one serving per year!
What invention do you think has been the biggest innovation for mankind?
Oh, I think probably the deep fryer! When we were designing my kitchen, I told my husband, Michael, “I don’t give a damn if there ain’t even a stove there! I’ve got to have a real deep fryer in my counter!”

Being that New Orleans is such a food town, you must absolutely love it!
I adore N’Awlins! I would have to say that Louisiana-style food is my second favorite style of food behind that farmhouse Southern style. Louisiana cookin’ is just phenomenal! And New Orleans has so much character, I just love it. I love that place Deanie’s, where you just sit down at the table and they bring you boiled red potatoes and butter; you know that makes this fat girl very, very happy! What a way to start a meal; it’s like you died and went to heaven! And I love Drago’s, where we had our first char-grilled oysters. That’s what inspired us to serve those at our restaurant in Savannah. They are awesome! I’ve been to Café Du Monde and I love it too! And I remember the very first time I ever set foot in New Orleans. I was around 26 years old, and I remember going to Pat O’Brien’s. And those dueling pianos! I just thought it was the grandest place I had ever been! I have not set foot back into Pat O’Brien’s since the late ’60s or early ’70s. It was wonderful. And I drank those hurricanes, and I said, “Lord have mercy!” [Laughs] They took pictures, and I still got that picture somewhere.

So the recipes in your sons’ beautiful new cookbook, The Deen Bros. Y’all Come Eat, look delicious. Your boys have become true celebrities themselves!
Oh my gosh! Thank you! I’m so proud of their book. I
like their first one, but this second one really blows the first one out of the water. I love my boys! I am so proud of them. I don’t know how it happened, but they are good guys; they just turned out so good. And you know, you never really know what “it” is and you can’t define “it,” but you know when somebody has “it,” and I knew they had “it.” And TV is second nature to them. I mean, they just walk up there and be themselves and it just works.

On Mother’s Day, will you be queen for the day or will you wind up in the kitchen like many mothers do?
Oh, Lord, honey, I don’t know if I’m working, I don’t know anything! Oh, I’ll wind up in the kitchen, though—that’s where I like it! For years, I was in the kitchen cooking for all the mothers that came to the restaurant. And that was the only place I wanted to be. When we got through feeding all the mothers, we would sit down at the end of the shift and have our Mother’s Day meal. In the last few years, that’s not been the case. If I’m home, I’ll probably have all the children over. That’s who I want to be with.

You just celebrated your fourth wedding anniversary with your husband, Michael, in March. You two look so happy together!
We love each other so much, and we have such a good time being together! It’s wonderful that Michael’s career allows him to be with me lots. It seems like we’ve been together for 40 years instead of four because we’re so comfortable with one another. Our feelings for each other have real deep roots, like we’ve spent years together. We’re soul mates, honey!

Forget about perfume and lingerie, girls, and get thee in that kitchen!
You get you a cake, honey! [Laughs] Play dirty, honey! Oh, it’s so good!

Okay, Paula, give me the menu for your last supper …
Well, to quote Michael—and I think he’s got the right answer—it would be a buffet, and it would be a very, very long one!