Tucker Fitz-Hugh, Jr. has a lot of pigs. “I painted a pig once,” he laughed, “and then everybody wanted one.
I’ve done chef pigs, lawyer pigs. Right now I’m working on a Pope pig.” 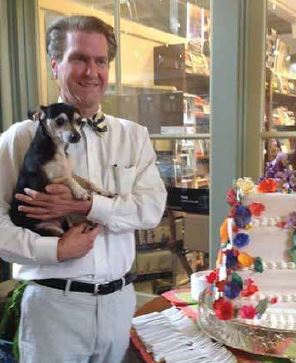 The fifth-generation New Orleanian is a masterful painter, having studied at the New Orleans Academy of Fine Arts under founder Auseklis Ozols. Proving that his ability extends beyond the porcine, Fitz-Hugh’s home studio displays several oil works in progress, including portraits, bayou landscapes and oysters on the half-shell. A gorgeous mural wraps the curved dining room wall of his Garden District home. Fitz-Hugh was Ozols’ apprentice while they created the piece: an abandoned dinner scene set on a light-struck chenier, filled with subtle animal allegories and homages to the artists’ personal lives. “He taught me how to see,” said Fitz-Hugh of his mentor.

Seeing is not only a vocation, but a pleasure in Fitz-Hugh’s garden. The space, filled with exotic plants and shaded by overhanging trees, spans the length of his house and is a work of art in its own right. Its main attraction is the “orchidarium,” a collection of brilliant flowering orchids ornamenting a live oak. “Heaven is what we create,” said Fitz-Hugh. “You feel closer to God in the garden.”

The painter, who’s also an accomplished chef, was recently chosen as a spokesperson for the Gulf Coast Seafood Foundation. He throws regular dinner parties, cooking for an often star-studded crowd of thirty or more. He’s also planning to turn his winter studio into a commercial kitchen to facilitate the expansion of his catering business.

Fitz-Hugh considers himself blessed to be able to pursue his passions, refining each piece as he creates it. “It really is all the same—painting, cooking, gardening,” he said. “You lay the foundation, and then it’s technique.”

View a selection of Fitz-Hugh’s paintings and contact the artist at www.tuckerfitzhugh.com

Local chanteuse Alexis Marceaux is a New Orleans favorite, singing around town in multiple groups and genres. Marceaux, who grew up in Chalmette, “surrounded by music,” also plays guitar, keys and percussion.

She performs often with partner Sam Craft as Alexis & the Samurai, playing music she characterizes as “indie rock with a Louisiana flair.” The duo’s original repertoire incorporates influences like Feist, Fleet Foxes and Fiona Apple, as well as subtle nods to zydeco and brass band music. “Sam and I both play percussion while playing other instruments,” Marceaux explained. “There are constant vocal harmonies…we whoop and shout and then dive right down into a slow, sweet chorale.” Alexis & the Samurai is currently enjoying a residency at Chickie Wah Wah, sharing the stage with venerable musicians like Alex McMurray, Craig Klein and Susan Cowsill.

Last summer, after noticing that audiences loved it when they sang their own versions of Cajun tunes, Marceaux and Craft assembled Sweet Crude. This seven-member “dream team” of musical friends and acquaintances performs original indie rock songs in Louisiana French, and debuted this spring. “Any reasonably aware citizen of these parts understands the cultural significance of Louisiana’s mother tongue,” said Marceaux.

On the rare occasion when she’s not playing, singing, listening to, or recording music, Marceaux likes to visit The New Movement Theater in the Marigny to watch improv shows. As a musical theater graduate of the New Orleans Center for Creative Arts, she believes “there’s still a huge part of me that is connected to the theater world that I have not tapped into yet.” She and Craft, along with a few friends, have become part of the house band for the theater’s bi-monthly “You Don’t Know the Half of It” show.

Currently in the process of recording at Marigny Recording Studio with friend and collaborator Rick Nelson, Marceaux is grateful to be where she is. “This beautiful city of ours has so much to offer,” she said. “I feel lucky that I was born in the place I was meant to stay.”

Buy CDs and merchandise, and learn more about Alexis Marceaux, at alexismarceaux.com

In the wake of Hurricane Katrina, when over thirty elderly residents of St. Rita’s Nursing Home in Saint Bernard, La., drowned instead of being evacuated, fingers pointed to Sal and Mabel Mangano. The Manganos, who had owned and operated St. Rita’s for years, decided to ride out the storm as they had always done, and when floodwaters swept into the single-story structure, thirty-five residents died.

In “Flood of Lies,” attorney James A. Cobb, Jr., who defended the Manganos during their trial for thirty-five counts of negligent homicide, tells their side of the story. “It wasn’t Sal and Mabel. It was a flood caused by the negligence of the Army Corps of Engineers and the levee boards,” Cobb said in a 2007 interview with “Esquire.” Lapses in duty by state officials were also a large part of the tragedy, Cobb contended, pointing to a government “cover-up” on the part of those also responsible for overseeing evacuation procedures.

Cobb, whose family lost its home in Lakeview in the flood and whose own story of loss is interwoven with the Manganos,’ took the case to fight the perception that the Manganos were monsters. They were the only people to be tried in a criminal court for anything that happened during Katrina, he points out, calling this scapegoating a “grave miscarriage of justice.” Providing facts of the Manganos’ case side by side with the levee breaches and floodwall failures, Cobb puts their accusation in context.

Painful but powerful, “Flood of Lies” is an unrelenting exposition of the individual struggles New Orleanians faced during Katrina—exemplified in Cobb’s personal experience—and of the systemic failures of authority that led to the St. Rita’s tragedy.

Find “Flood of Lies” at your local bookstore or on Amazon, and learn more about the book at www.floodoflies.com