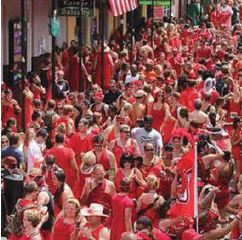 This annual summer restaurant promotion offers delectable three-course menus for low prices at famous restaurants all over town. Celebrate dining in America’s most delicious city at a price that will cool down your wallet. Participating restaurants include Antoine’s, Bourbon House, Cafe Giovanni, The Bombay Club, Brigtsen’s, Cafe Adelaide, Dijon, Vacherie and more! coolinaryneworleans.com

August 10 – Dirty Linen Night
In response to White Linen Night, an annual event in the Warehouse Arts District on Julia Street, some artists at a French Quarter gallery decided to hold a tongue-in-cheek party to feature the artists and galleries of Royal Street during the slowest month of the year. Since then, the event has taken place annually to bring attention to the unique artist-run galleries, shops and other businesses in the Royal Street Artist’s District, located in one of the most historic neighborhoods in the country. Dirty Linen Night is free and open to the public and will feature more than 60 galleries and shops.

August 10 – New Orleans Red Dress Run
Sponsored by the Hash House Harriers, a self-proclaimed “drinking club with a running problem,” the annual New Orleans Red Dress Run is a uniquely hilarious undertaking that raises money for breast cancer research among other worthy causes. The roughly four-mile run begins at 9:30 AM, when runners donning mandatory red dresses assemble for music and drinks before making their way through the French Quarter, spreading red-frocked joy to all along the way. nolareddress.com

August 28-September 2 –Southern Decadence Festival
Also known as “Gay Mardi Gras,” the Southern Decadence Festival started in 1972 and has grown into one of the largest gay celebrations in the country. This week-long extravaganza offers parties, contests and pageants centered at the Bourbon Pub on the corner of Bourbon and St. Ann Streets in the French Quarter. The festival kicks off with a parade and performances by last year’s Grand Marshals. southerndecadence.com