An Interview with Karena Niblett, Regional Vice President of Winn-Dixie 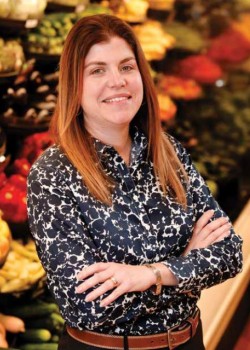 On July 31, Winn-Dixie is set to be the first major opening on the block, boasting a new look and design with unique features and local favorites customers love. Winn-Dixie executive Karena Niblett is excited about the new store and Winn-Dixie’s presence in New Orleans.

“You have to be from Louisiana to truly understand the food culture, and most of my team was born here,” said Niblett, who is a regional vice president for the chain. “Within our prepared foods, not only do we offer Southern comfort food, such as mashed potatoes and home-style macaroni and cheese, but we also offer local dishes, such as étouffée and crawfish Monica. We can’t just stock beans on our shelves. We need to have Blue Runner. We adapt to our local market. For example, we carry 50-lb. bags of rice during gumbo season.”

With the new Mid-City Winn-Dixie located directly across the street from Rouses, and two other big-box grocers setting up shop in or near the neighborhood during the second half of this year, Niblett isn’t fazed. “Competition is good for us,” she said. “We have 480 Winn-Dixie stores throughout the Southeast, and our goal is to do what’s right for each neighborhood we serve.”

If in the national supermarket landscape Whole Foods targets affluent, natural-food shoppers and Costco relies on a membership model, Winn-Dixie’s unifying niche is a neighborhood focus, according to Niblett.

The Mid-City store, the first new Winn-Dixie in New Orleans since 2010, is a “premier” store that emphasizes fresh options, such as prepared hot foods, gourmet cheeses, locally inspired desserts and much more. It’s located on the Lafitte Corridor, an old railway line that is now being converted to a bike path, which will extend from Lakeview to the French Quarter.

Niblett explained that this location is important to the store’s identity. “Each Winn-Dixie location is customized to fit the unique neighborhoods we serve. The new Winn-Dixie will place an emphasis on healthy living options. The store will feature a larger-than-usual assortment of natural and organic foods, as well as a Farmer’s Market entrance highlighting more locally grown produce.”

The new Winn-Dixie location is just one of the 95 stores in Niblett’s region. She manages six district directors, and says her management style is to motivate her team, without micromanaging them. She sees herself as being an advocate, which entails listening to her team and making sure they are getting what they need for their stores and communities. Even though her region stretches from Pensacola to the other side of Lafayette, she visits each store twice a year.

“It’s a big undertaking, but my favorite place is in the store,” she said. “You learn so much from the associates. They spend a lot of time interacting with customers. The best ideas come from them. The workers know how to best present their products to customers.” Niblett has only been with Winn-Dixie since 2011, but she’s already seen great success during her tenure. The associates have become more comfortable with her hands-on approach, and they eagerly prepare for her visits with suggestions and lists of products and items they need to serve customers as efficiently as possible. Niblett has been able to secure the resources that her team need to successfully do their jobs, and in turn has seen great return on investment and increases in sales.

Niblett has had a long career in food service and retail, starting with a managerial position at Godfather’s Pizza that she held while taking business courses at Southeastern Louisiana University in Hammond. She later worked at Lafitte’s Landing, a fine dining restaurant owned by renowned Chef John Folse. La Madeleine recruited her as a director of catering in Baton Rouge, and when Target set up shop in Louisiana, she made the move to big-box retail. Niblett quickly moved up through Target’s ranks, but she eventually decided to take a break from her career for about six months.

“I have five little kids—two sets of twins (two girls and two boys), with a boy in the middle. It’s always a challenge managing a family while having a demanding career. Like so many working moms, it’s very important for me to successfully balance both aspects of my life.”

After taking a break, Niblett found her next job at Walmart. “I’m a big admirer of Sam Walton,” she said. “He would visit stores and associates. He was very connected to his business, but you don’t see that anymore. The teams are too big.”