Cilantro adds a new twist on an old favorite 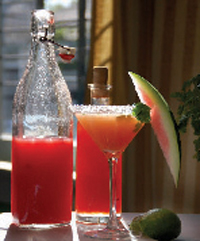 The couple, eyes aglow with the promise of all things New Orleans, order their drinks. To make them, I use two handfuls of a leafy herb that’s reputedly an aphrodisiac, and in larger amounts a narcotic, along with a bottled substance our poets tell us causes people to remove their clothes. Here they are, engaged in decent conversation, reverently unfolding a brochure for a cemetery tour, next thing they know they’ll be holding each other up off the floor belting out “Islands in the Stream” at the Cat’s Meow. Come March, they’ll welcome the newest addition to their family, baby son Decatur. Getting people from here to there, that’s the strange, quasi-priestly role I play, humble mediator of tequila’s devilish designs.

Cilantro: Beloved by some, repulsive to others. I’ve found it to be quite versatile in cocktails, and I’m especially impressed with the way it can sacrifice its distinct taste in the service of exposing and highlighting surrounding flavors. For example, in my Cilantro Mint Cocktail at Iris, which is based on vodka and the sugar cane liqueur falernum, the cilantro uncannily merges grape, apple and mint, while adjourning to the background. As in food recipes, it should always be muddled fresh, not cooked. It’s no great imaginative feat to match it with watermelon, as in the recipe below, but again, I think that, hand in hand with the watermelon syrup (cooked watermelon has a fascinating richness), it adds unexpected depth and even subtlety to a margarita.

By the way, the margarita, even next to the classic daiquiri, is for me the queen of cocktails. Rum’s a good sport in all sorts of churlish concoctions, but tequila screamed in the crib for lime and Cointreau. For many, in fact, the taste of tequila is inseparable from its cahoots with these two other ingredients. It’s one of those drinks that can suffer interpretation and still come out alive and kicking. I just say, always more sour than sweet and never frozen—but between frozen and nothing, I will take the frozen.