Home SPORTS It’s Up To Us: How Sports Can Help Save New Orleans
SPORTS
July 31, 2013 Paul Wegmann 0

It’s Up To Us: How Sports Can Help Save New Orleans

Vince Lombardi said that, in sports, winning is a habit. 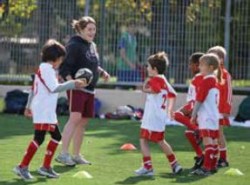 But in life, there is winning and there is losing, and then there is also getting a chance to get in the game and develop the habits that make winning in life possible. The most legendary coaches, whether Lombardi or Paul Brown, Red Auerbach or John Wooden, Earl Weaver or Casey Stengal, were more than just instructors in technique and formulators of strategy; they were teachers, talented orators, shapers of emotion, skill, principle and discipline. They were loved by their players as not just leaders in battle and victory, but as friends, father figures and life mentors who taught so much more than just how to throw, shoot, run, kick and catch. They taught their teams how to look deep inside and reach and find much more than they ever thought possible, to do what they thought could never be done.

In New Orleans today, a city rising ever more from a devastating deluge to ever-greater entrepreneurial heights, there nonetheless continues a troubling tradition of youth who go un-coached in sport and life. While the city’s ambitions remain high, many of its citizens will never get the chance to “get in the game.” In the face of this decades-long problem, Up2Us, a local organization that is also part of a national movement, has itself arisen to offer a solution in a very practical way, providing coaching through sports that brings real life benefits to young Orleanians and the city they live in.

New Orleans’ Up2Us Regional Coordinator, Luella Williams, has helped spearhead the Coach Training Institute. Between July 27 and 30, Up2Us will train and ultimately induct 44 new coaches into its program. As Williams explained, “We teach sports-based life development techniques and how to create safe spaces for youth utilizing sports. Our institute focuses on trauma-sensitive coaching, helping children rewire how they instinctively act towards certain events and how they experience various traumas in their lives. We integrate all that into how the coaches teach sports.” Though the program is new to New Orleans, it has already been in place nationally, and has proven effective in large cities like Boston, Chicago, New York, Miami and Los Angeles. It is funded regionally by the Laureus Sport For Good Foundation, Mercedes-Benz and Nike, and was founded in 2009 by executive director, Paul Caccamo.

Up2Us partners with a coalition of youth programs to use the power of sports to end violence in communities, promote health and inspire academic success. The Coach Training Institute will involve 25 such partners, and will be active not only in a wide range of sports, such as soccer, basketball, biking, rugby, football, flag football and others, but also in a variety of intellectual skills, such as reading and writing. Coaches will be trained in youth development techniques in their specific sports, and will then return to their host sites, where they will develop and integrate the techniques they have learned.

Williams explained that ultimately, the goal is to hold the Training Institute annually. “We want to develop a cohort of coaches so that they can learn from each other and potentially have their teams compete against each other,” she said. “We are moving towards having a universal start date to create a culture of sports-based youth development—a movement—and thereby build an alumni-based mentor program. We are working to ensure that every child in America has access to a coach/mentor. It’s one thing to be a coach and it’s one thing to be a mentor, but when you blend those two roles, it creates a safe space for children; that’s what we’re trying to do. It’s about building the whole child, not necessarily about building the next Drew Brees, but making competition fun and exciting while also growing life skills. It’s about community as well—engaging the parents as well as the entire community.”

The future of sports relies on children, but perhaps the future, for many children, including this city’s next generation, rests upon sports. Up2Us has chosen New Orleans to lead a national effort to ensure that all children have a place to play and a chance to learn and grow by giving them a coach and an atmosphere in which they can move forward.

To learn more, visit Up2Us.org
If you are interested in participating in the Coach Training Institute, email Luella Williams at [email protected]