Hubig’s Pies has solid plans to rebuild its bakery on Press Street in the Marigny almost a year after a fire destroyed the original operation. The site, owned by the New Orleans Center for Creative Arts, has been approved, and avid fans anxiously await the first delectable pies. Hubig’s is delighted to remain in the community of which it has been a part since its founding in 1921. Simon, Hubig’s mascot who appears on the packaging of each and every pie, has become a beloved, nostalgic symbol of New Orleans and both locals and tourists alike are excited to see him again. 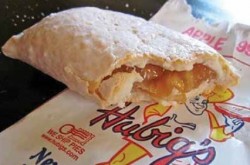 On St. Charles Avenue, a chameleon-esque restaurant has gone through another name change, though it remains an Italian eatery. What was once the almost unpronouncable Trinacria later morphed into Leonardo’s Trattoria, only to switch once again, this time to Cibugnù. The newest restaurant touts features like a wood-fired oven, hand-made pasta and al fresco dining. There’s even a sample menu listing dishes like Cinque Bucci, a Squid Ink Pasta with Crab Cream; Briante, Sausage Pizza and Braciola, Flank Steak rolled with Speck and Gorgonzola Cheese. Sometimes change is for the better…

Chef Gabriel Beard has taken over the helm at Serendipity after an abrupt departure from Chef Chris DeBarr, who left for other opportunities in Houston. Serendipity, located in the American Can Company Building in Mid City, is moving on with Chef Beard, who has worked for local greats like Frank Brigtsen and Susan Spicer. The restaurant menu already features Beard’s own dishes that while unique, seem a bit more approachable for the average diner. New items on the menu reflect a focus on American comfort food like Paneed Pork topped with a poached egg and served with corn flour dumplings and Hangar Steak drizzled with marrow sauce and served with green bean casserole and pan-roasted potatoes.

The much anticipated McClure’s Barbecue opened last month on the corner of Magazine and Bordeaux Streets in Uptown. After serving his mouth-watering ‘q’ to avid fans at a pop-up inside Dante’s Kitchen in the Riverbend, Neil McClure decided it was time to open his very own restaurant. The new eatery offers smoky barbecue fare like Ribs, Pulled Pork, Beef Brisket and Smoked Chicken with several house-made sides including Spicy Sweet Cole Slaw, 4-Cheese Macaroni and Pork & Pork & Beans. Visit McClure’s online to see the menu and catering services at McCluresBarbecue.com