Eric Heatherly: Got Your Goat

The elite Southern musician emerges with fascinating new project The Goats of Kudzu and enthusiastically supports the Louisiana SPCA as a Celebrity Chair for the 35th Annual Howling Success Patron Party & Gala on November 2, 2013 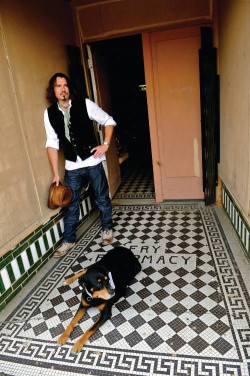 Musical whiz kid Eric Heatherly is poised to mow things down with his brand-new project, The Goats of Kudzu. After years of major label haggles, heated child custody battles and other letdowns in life, Heatherly strove to persevere through the bloodsucking and retaliated by cranking out an earth-shaker of a new album, self-titled “The Goats of Kudzu,” an eclectic collection of warm, soulful, rootsy tunes laced with a strikingly raw organic vibe that resonates right down to the bone. Tracks like “Soul Butter,” “All Fried Up” and “Guaranteed Tears” were recorded on the most retro yet workable equipment he could find. Heatherly has been hailed as “the best mix of Sun Records meets the Grand Ole Opry that I’ve ever seen or heard” by Billy Bob Thornton, and recognized as a musical tour de force by industry stalwarts such as Duane Eddy and Jerry Lee Lewis. Likewise, the accolades are forthcoming with “The Goats of Kudzu”; respected music historian Colin Escott deemed Heatherly’s newest work rich, timeless music with eternal values and stated, “If you care about country music’s past but fear for its future, you need to hear ‘The Goats of Kudzu.’”

Heatherly played most of the instruments himself in the studio and will perform live as a one-man band. As he belts away and kicks out songs on drums, guitar and harmonica, he’ll show the world a little something different with the “Drum-O-Phone” he invented.

In addition to getting his goat on musically, Heatherly is also letting things go to the dogs: in honor of his lovable Lucky, a shelter pup Heatherly rescued almost 13 years ago, the guitar guru and staunch supporter of animal causes has joined forces with the Louisiana SPCA as a Celebrity Chair for the 35th Annual Howling Success Patron Party & Gala at the Hyatt Regency New Orleans on Saturday, November 2. Talk about an exciting evening of honest-to-goodness party animals!

Eric, this is a cool and amazing new sound you’ve hit upon with your new project, The Goats of Kudzu. What a great vibe you’ve got going on here!
Thanks, Christine! Basically, it took over two years of writing and then recording on vintage recording equipment at two analog studios in Nashville: Fry Pharmacy and Welcome to 1979. I didn’t think about the major label systems in Nashville or the radio; I just tried to make a piece of art that I’d be happy with if I heard it somewhere in a café, or on a train in Italy or driving on the coast of California. I tried to write songs that were personal and that reflected all the mood swings I’ve been through with records not being released, family transitions and just a gumbo of different things going on in my life. I wanted to have an eclectic mix of things, but for it to still have that common thread of rawness and organic vibey-ness. I poured every ounce I had into this collection. When you are free of confines, you might as well make music you love and do what you are happy with at the end of the day. I was tired of beating my head against the wall, trying to fit into the modern, contemporary country rock sound with my bluesy, country edge, because no matter how much I try to confine it and shave it down to fit it into that box, it was still too much on the outside.

You have always been an innovative guy, but with “The Goats of Kudzu,” you have outdone yourself! You’ve explored a new sound.
It’s my lifeblood to find a new take on something, and I did learn to play more instruments for this album. The album opens up with a kick drum, and it’s that gritty, sultry, itchy-like-okra, snappy-like-beans, down-and-dirty distorted sound. This is the first time people are hearing the sound of a Drum-O-Phone, which I built. I took a 1941 Ludwig bass drum and incorporated a phonograph record horn and miked the drum and the horn. It’s a signature sound that sounds like John Bonham from Led Zeppelin. You’ve got to hear this thing live because it’s powerful; it’ll knock a hole in your heart!

With the song “Franklin Courthouse Blues,” it seems like experiencing tough times allowed you to create fabulous music.
It’s true. Like Harlan Howard said, “Until you’ve had a couple of divorces and your dog’s been run over by a truck, you can’t write a true country song.” This album comes clean and lets people who are interested know what’s happened to me personally and professionally, with all the custody battles and the whole legal debacle that has dragged me over the coals. There’s nothing in this world as bad as wanting to be with your child and not being able to. It’s a song for the fathers out there who are providers and who love their children and want to be with them more than they want that Mercedes or that new Fender guitar, and they sacrifice everything to be with them. It’s not for the deadbeat dads out there; it’s for the guys who’ve been heart-wrenched and financially ruined by the legal system and have done everything humanly possible to raise their kids and be with them. I thought they deserved a song. Just yesterday, an unsolicited guy told me he couldn’t finish listening to the song because he was in tears. I want to connect with people through my music and, in that instance, the music did what it was supposed to do. I’ve lived a lot and have earned my stripes with this thing and I feel great about it.

The rich, throwback sound on “The Goats of Kudzu” fits in well with New Orleans, with the European influences and jazz laced throughout it.
I’ve spent extensive amounts of time touring in Europe. You hear Tom Waits or Django Reinhardt and you can’t help but absorb that stuff when you’re outside of the poppy American realm. And all the Italian, French and other multicultural influences make New Orleans a gritty town. It’s organic, it’s sultry — I totally think it’s a perfect fit for this music. I even have a line in the first track, “Whittle,” that goes, “It’s hotter than August in New Orleans” because two summers ago I really burnt my tail up in New Orleans, but it was great! I ate fantastic food and I was one happy boy! I was there for the Saints and Steelers game, and everywhere I went, the Saints fans and the Steelers fans all got along, screaming and high-fiving one another, no animosity whatsoever. I couldn’t believe the hospitality the people of New Orleans showed the Steelers fans. It was really something to see.

You rescued your dog Lucky from a shelter, so it’s fabulous that you are a Celebrity Chair for the Louisiana SPCA’s 35th Annual Howling Success Patron Party & Gala this November 2 at the Hyatt Regency New Orleans.
I am honored to be involved with Howling Success! Lucky is almost 13 years old. She’s been on several of my CDs, both her picture and her voice. Lucky went to every one of the “Goats” sessions; she’s part of the album: barking, sneezing and growling on it! (Laughs.) She goes everywhere with me; she’s a big part of my life.

I think about the devastation after Hurricane Katrina and all those thousands of displaced animals I saw on the news. It brought me to tears seeing those poor dogs swimming and trying to get rescued. I know the Louisiana SPCA does wonderful things to help animals and just had the groundbreaking for a state-of-the-art clinic expansion, so it shows how committed they’ve remained to the community after the storm.

When I’m out on the road, my little girl Christiana and I visit animals in the shelters just to give them a little action and a break. It’s good for her to see that. When we drive away, she’ll ask, “Daddy, what’s going to happen to that brown-and-white spotted dog?” and I’ll say, “Well, we hope and pray that he finds a home.” I want her to realize animals need help and you have to raise money and do everything you can to help feed them, get them veterinary care and help them find homes. There is some kind of special bond with those shelter dogs; they know you saved their life! Poor Lucky was in the bottom of a cold, wet cage, just shivering at seven weeks old, screaming her brains out. I picked her up and she cried even harder. I found out that she was sore because they tried to euthanize her the night before and the needle missed her heart! I went, “WHAT! Well, she is going home now!”