Places: Aunt Sally’s Pralines
It was the French who originally combined almonds in a sugar syrup to craft the first pralines in the 1600s. Settlers brought the recipe to Louisiana, where both sugar cane and pecan trees were plentiful. When, in the 19th century, New Orleans chefs substituted pecans for almonds and added cream to thicken the confection, the Southern praline was born. 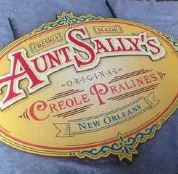 In the early 1930s, Pierre and Diane Bagur opened their French Quarter shop in what looked like a log cabin. The Bagurs were both second-generation New Orleanians of French Creole descent who wanted nothing more than to share the wonders of their hometown with newcomers. Among the items they sold were “pralines,” unique Creole candies made over a gas stove in a copper pot and then poured onto a marble surface to cool – the same way Aunt Sally’s Pralines are prepared today.

Years later, the Bagur family is still dedicated to carrying out the dream of Pierre and Diane, proudly sharing its Creole pralines, cookbooks and memorabilia with both locals and visitors to the Crescent City. You can find their “disks of pure joy” at 810 Decatur Street or online at auntsallys.com

Downtown NOLA Award – Best-Kept Secret: Dee’s Coffee
Located on Baronne Street between Union and Perdido, Dee’s Coffee is a hidden gem of a cafe in the heart of New Orleans’ Central Business District. Open every day, Dee’s is the go-to spot for deliciously rich espressos, cappuccinos, lattes, mochas and iced coffees brewed from freshly roasted blends. To stay competitive with other coffeehouses in the area, the owner keeps her source close to her heart, but does reveal that the beans she gets are roasted often in small batches from a local distributor. In addition to coffee, Dee’s also offers a large menu of loose-leaf teas and locally baked pastries. Bring your laptop to enjoy free Wi-Fi while sipping on some of the most delicious coffee Downtown has to offer. deescoffee.com

Downtown Proud
Did you know? If you are over the age of 15, riding a bicycle on the sidewalks of Downtown is against the law (City of New Orleans, Municipal Code: 154-1416).

The area’s enhanced police detail has been instructed to issue citations to those who do not comply with this provision, and the penalty is a fine and/or imprisonment. There are over five miles of dedicated bike lanes in the Downtown Development District, so make good use of them and be Downtown proud! Stay safe!

Eat & Drink: The Lucky Rooster
From the folks who brought you Juan’s Flying Burrito and Slice comes Lucky Rooster, a restaurant featuring Asian market and street cuisine with a slight nod to New Orleans. Located on Baronne Street on the edge of the CBD, Lucky Rooster combines the talents of general manager and wine director Joe Briand and chef Neal Swidler to bring inexpensive, unique cuisine to the denizens of the Crescent City. “Nibble,” “munch,” “peck,” “crunch” and “slurp” your way through a menu featuring Korean Sticky Beef, a Happy Mandarin Salad, the “Barbe et Queue” Banh Mi with melting goujajang chile-glazed pork or a “Dragon Warrior” soup with house-smoked tofu and Korean rice dumplings. Don’t leave without a “happy ending”: a Snappy Ginger Lemon Bar or a Fortunate Cookie, “obtuse poetry included.”

169
previous Eric Heatherly: Got Your Goat
next Fitness: September 2013