Aerial & Acro Yoga
Are you looking for a way to take your yoga practice to new heights? Aerial and Acro Yoga are fun, challenging, and ultimately relaxing workouts that have only recently been offered in the Crescent City. 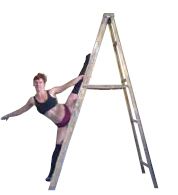 Did You Know?
An inversion (i.e. hanging upside down) encourages lymphatic drainage, a healthier heart and lung tissue and a more balanced hormonal system.

Aerial Yoga
What: A new experimental form of yoga that employs a circus hammock or “silk,” a sling rigged from single points in the ceiling.

Why: Greater strength and flexibility. The effect of gravity and the stretch of the silk allow for deeper stretches and more complete backbends, not to mention the benefits of inversion.

Fitness Fanatic: Jessica Tzur
Aerial Yoga Instructor, Pilates trainer & Burlesque Performer
A self-described “theater major who dropped out to join the circus,” Jessica Tzur trained as a trapeze artist at Circus Center San Francisco, but then returned home to New Orleans, where, among many other things, she teaches Aerial Yoga at Swan River Yoga. Tzur has performed on her trapeze in local burlesque shows for years, but she just recently became a burlesque performer herself. She is also known around town for her signature “ladder act,” in which she uses a ladder as her aerial apparatus—something that must be seen to be believed.

When asked about the benefits of aerial yoga, Tzur said: “It obviously takes a lot of upper body strength, but the thing people often don’t realize is how much it strengthens your core. You’re using your core muscles to stabilize yourself the entire time”

LOOK THE PART
Gear to Get You Going