In football, as in life, versatility is key to success. Adjusting to changing circumstances on the ground, as they happen, is a skill some of the best have and hone. They know that, even more than the talented, it is those most adaptable to change who survive and thrive. 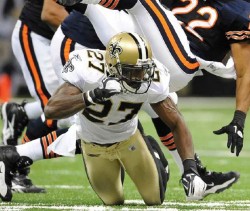 The Saints’ 2013 defense appears determined to apply this maxim to the fullest under new defensive coordinator Rob Ryan, and no defender is more suited to this new concept than Malcolm Jenkins. Having emerged as the 2008 Jim Thorpe Award-winning cornerback from Ohio State, Jenkins was recognized as that season’s best college defensive back. He began his NFL career in 2009 as a cornerback for the Saints, and then transitioned to a free safety position in 2010.

Despite Jenkins being a stalwart defender through three Saints playoff seasons and a championship, last year’s challenges necessitated a revised approach for the defense as a whole that harkened back to what worked from 2009-11. With this approach, the team will rely on Jenkins’ reputation as a hybrid player; his versatility will be perfect for this new means of attacking offenses in the forthcoming year. As Jenkins himself explained,

“This is the kind of defense I enjoy playing on because I get to move around and play in a bunch of different positions. This defense has a number of hybrid players: I’m one, Kenny Vaccaro is another and Roman Harper can cover anyone and can play in the box a lot. He can also play deep, so we can move guys around and present some exotic, confusing looks for the offense. That’s fun for me, to use our skill sets to the best of our abilities.”

Known in the past for specializing in pass defense, Jenkins will nonetheless be used in several different packages to help cloak the defense and ensure that opposing offenses cannot readily react.

“I’m probably more of a pass defender, but I will be in different looks. I might be at the nickel in one situation, or I could be at the three or I might line up somewhere else. It really depends on what the offense gives us and what personnel we are in. We have a lot of different packages, and that’s how we were in 2009-10 when we were getting a lot of turnovers and hits on the quarterback and big plays like that. Presenting exotic looks and putting guys in different spots makes it fun for us.”

It’s also good football. Saints fans can look forward to seeing all three of the Saints’ star playmaking safeties on the field at the same time this year, a strategy that was practiced a good amount during training camp. The key, however, is that they will appear in different packages. “That makes us very versatile,” said Jenkins. “Guys are interchangeable, so it is confusing for offenses to identify who is who,” thereby masking what the defense and its various role-players will be doing in any given situation.

Jenkins also explained what makes great defensive backs—what separates those who play from those who excel:

“Mentally, they have to have a lot of confidence and know the defense, as well as be able to match up and cover. Every DB, no matter how good, is going to get beat at some point, so they have to be able to move on to the next play and really go out there and dominate, especially in the corner position covering. You’re one-on-one every play. If you’re tired, you still have to lock up your guy. You always have to have that confidence or swagger about yourself. The other thing is having the physicality, that factor that nobody can coach: being hardnosed, especially at the safety or nickel position, having the ability and desire to tackle and defeat blocks. Coaches really can’t give you that; it’s something you’re born with.”

Jenkins brings that concept of versatility to his life in New Orleans as well. He founded the Malcolm Jenkins Foundation in 2010 to “effectuate change in the lives of youth.” The foundation operates in three regions, but its main focus is New Orleans. Its Project REWARDS initiative partners with the Greater New Orleans Urban League — College Track; the Urban League provides the educational structure underpinning academic support for the after-school program, while “what we do is bring life skills to it,” explained Jenkins. “We help with health and wellness, leadership, confidence-building and all the social skills you need to succeed in life.” The program generated $10,000 in scholarships in its first year, and by last year, that figure had grown to $25,000. “The fun part,” Jenkins said, “has been to really get to know the kids and to go to their graduations. The program has really done a lot for them.”
The Malcolm Jenkins Foundation goes further, though, with its attempts to directly connect the city’s civic leaders with the next generation of youth. “We like to have local leaders come and talk to the kids because a lot of it is about mentorship,” explained Jenkins. “We get them to talk to the kids about topics such as leadership. That way the kids can put a face to a name and really see local leaders give back. They can follow that trend when they are young adults.”

One thing is clear: Jenkins’ versatility could be a key component in helping his team and the city’s youth emerge as winners this year and in the years to come.

More information on the Malcolm Jenkins Foundation and its admirable efforts can be found at themalcolmjenkinsfoundation.org

199
previous It’s Up To Us: How Sports Can Help Save New Orleans
next The Center of It All