What’s a typical day like in the life of Gayle Benson, wife of Saints owner and businessman Tom Benson? Perched on a couch in her spacious foyer, Benson laughed. 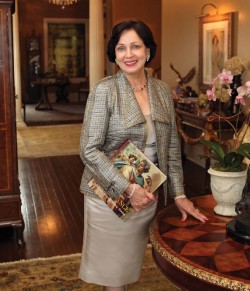 “There is no typical day. Most days, I change clothes at least three times for all of the different places I’m going — it sounds glamorous, but it’s a lot of work.”

Benson, a former interior designer who was coincidentally just named one of the Top Five Best Dressed Ladies in Louisiana, wears a lot of hats in addition to her many outfits. She’s a member of the board of numerous organizations, including the NOCCA Institute, Archbishop Hannan High School, Audubon Nature Institute and Ochsner Health Foundation.

Born in New Orleans, Benson grew up in Old Algiers, attending Catholic schools under the watchful eye of her “very protective” mother. She began her career as a manager for a New York-based costume jeweler, managing over 40 employees in the company’s daily operation.

Interested in historic preservation and real estate development, Benson began buying, renovating and selling New Orleans properties in the late ‘70s. The move allowed her to combine her enthusiasm for interior design with property management. “Buildings are like children,” said Benson, who received numerous accolades and awards for her design and construction work. “They’re all different.”

As her design career grew from residential to commercial spaces, Benson worked on hotels, grocery stores and car dealerships, leading major redesigns and renovations. She redesigned suites and public spaces in the Superdome, and opened a wholesale design showroom for her industry peers. An accomplished seamstress who used to make her own clothes, Benson also launched a successful women’s clothing line. She even worked on several automotive dealerships belonging to Tom Benson — but the two would not meet until an early-morning Mass in 2004.

At first, Benson was unimpressed by her future husband. Seeing him walk uninvited into the St. Louis Cathedral sacristy, she said her first thought was, “The nerve of this man!” But upon learning that Tom was an Honorary Oblate of the church, and appreciating his “old-school, very respectable and sincere” style of courtship, Benson, a lifelong devout Catholic, was won over. Later that year, the two enjoyed a “very special and beautiful wedding” in San Antonio.

Since then, the Bensons have teamed up on philanthropic efforts throughout New Orleans. Driving by Ochsner’s Jefferson campus, you’ll glimpse the Gayle and Tom Benson Cancer Center, a state-of-the-art facility housing cancer specialists, advanced technologies, social workers and financial consultants. In meshing all of these services, the center focuses on providing holistic cancer therapy.

Explaining the motive behind the couple’s gift to the hospital, Benson said, “People shouldn’t have to leave Louisiana for cancer treatment. They’re doing an incredible job at Ochsner.” In fact, Benson herself was treated for thyroid cancer at Ochsner in her twenties. “Cancer is a devastating disease. You feel totally helpless,” she said. “It’s a very personal thing to everyone.”

Right now, Benson is gearing up for Ochsner’s first annual “Moonlight and Miracles” gala, a charity event benefiting cancer services and research that will take place at the Mercedez-Benz Superdome this November. The idea for the fundraiser “kind of sprang from the Cancer Center,” said Benson. “I’m really excited about it!” As chairwoman of the event committee, she oversees 150 volunteers.

In holding the event at the Superdome, Benson’s goal was to offer a public event that more people could participate in, moving away from the hospital’s past private fundraisers. The event will feature a live auction, cocktail party, seated dinner and raffle of a new Mercedez-Benz.

Along with the Ochsner gala, Benson is presently working on a campaign called “I Will Give You Shepherds,” which plans to renovate the second floor of the historic Notre Dame Seminary on Carrollton Avenue. “We’re about halfway through raising money,” said Benson, who has worked with local Catholic Charities services, including the Archbishop’s Community Appeal fundraiser, over the past 25 years.

In addition to her multiple other projects, Benson is consulting on a book being written on her husband’s life story, the Saints and Tom’s many other investments and accomplishments. She often visits schools to talk to students about topics ranging from sports to self-esteem and confidence, and also speaks at local organizations and other groups.
Addressing a group of Girl Scouts earlier this year, Benson advised the young ladies to accept compliments gracefully and motivate themselves. “You must set your own goals to find what you want to do in life,” said Benson, urging her listeners to take pride in their talents and successes.

Since marrying Tom, Benson has become a big fan of football, though she says she sometimes still has “dumb questions” for Tom and Saints general manager Mickey Loomis. She enjoys a close relationship with the Saints, and during training camp, she’s out there watching every day. “I always send [the players] articles and pictures when I see them in the newspaper,” Benson said. “They think I’m their den mother.” Refusing to pick favorites, she demurred, “They all have good personalities.”

Since her husband bought the New Orleans Hornets (now the Pelicans), Benson has been getting into basketball too. “We only missed one home game last year — that’s 41 games,” she said.

Another reason for Benson to keep busy is that, well, her husband is. “He goes to the office every day around 8:30 or 9 and works until 6,” she said of Tom. But Benson is grateful for the full lives she and Tom lead, and finds her work truly rewarding. “I try to help whoever asks me,” she said. “I think that’s really important.”

To learn more about Ochsner’s Moonlight and Miracles gala or purchase tickets, visit ochsner.org/miraclesgala or call (504) 842-7113.